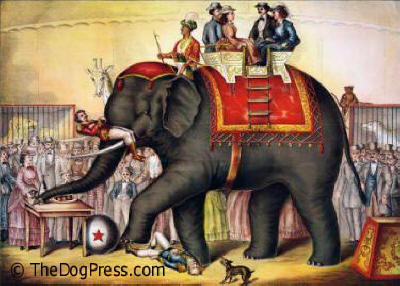 We broke the story in 2007.  As our readers have come to expect, TheDogPress stood out from a ravenous media cheered on by rabid animal rights groups. We debunked the charges, citing where they originated.

It was a big story, all over the internet and kept alive by media outlets that condemned the circus. Why? Because it got viewers and sold papers. The point is, whatever their position, the media had an attentive audience because 99 out of 100 people in the U.S. love the circus. Were that not true, circuses would have collapsed long ago.

What the media hasn’t said is that HSUS, ASPCA, etc. lost their appeal and in February 2010, Feld filed its own lawsuit against the plaintiffs named in the suit against their circus. We reported that too but the story was covered in more detail by KeepOur Animals.com {2} which said “The Lawsuit alleges that the HSUS and its Senior Attorney for Litigation violated the "RICO Statute," and further alleges that they engaged in "Money Laundering, Illegal Witness Payments, Bribery, Mail Fraud, Wire Fraud, Malicious Prosecution, Obstruction of Justice, Abuse of Process," and most significantly, Conspiracy to Harm a Business.”

The site now reports that ASPCA, HSUS et al have exhausted their legal remedies, and “FELD is now claiming reimbursement for legal fees concerning the first suit, which may exceed $20 Million.” Not only that, and this made me smile, in addition to the $20 million, the circus could be awarded “Three times (their) actual legal fees” as punishment in connection with violation of the RICO Act. 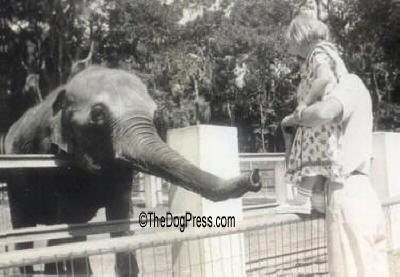 I don’t know about you, but I love elephants as much as I love my dogs. My best childhood friend was an elephant named Miss Chick and my father felt the same way about her so we visited the young elephant regularly. Yes, she remembered me every time. One of the best books I’ve ever read is Water For Elephants. It was about the circus, and the elephants, and of course, a cruel elephant trainer. It accurately portrayed the humanistic understanding and behavior of elephants.

TheDogPress would be the first to condemn neglect or cruelty to any animal but especially a circus elephant. Like all who love animals, we hate the innate cruelty of keeping a wild animal in captivity but the fact is, most zoo and circus animals today are born in captivity. The ultimate irony is that the circus and nature parks may be the last opportunity some species have to survive and the only chance your children will ever have to see a live elephant.

Feld Entertainment is not seeking criminal prosecution against the HSUS, ASPCA, etc. The circus is seeking civil damages in the form of legal fees for the first case that was dismissed under RICO statues) it has the right to claim up to three times the amount of the damages incurred.

For background on this 5-year old case, see: Circus Lawsuits, involving PETA and the SPCA display below.