AKC had so much registration income after World War II they set up hidden financial reserve accounts just like Enron Company and dog breeders have kept it healthy.

The following is my own individual opinion and does not reflect the official opinion of any dog club or organization with which I may be affiliated.

About one hundred years ago, the AKC made the decision to have dog registration income support the dog show operation. There were some people even then who thought it was a financial mistake, that each department should be self-supporting, but they were overruled and for many years there was no real financial problem. The money from dog registrations supported the dog show operation.

After the end of World War Two in 1945 the demand for pure-bred dogs increased, as opposed to just any dog from the local pound. People wanted a pure-bred dog and were willing to pay big money for one, a dog with "papers", AKC papers that is. The AKC rode the crest of the financial wave. The AKC had so much money coming in they set up hidden financial reserve accounts – just like the Enron Company in Texas did. 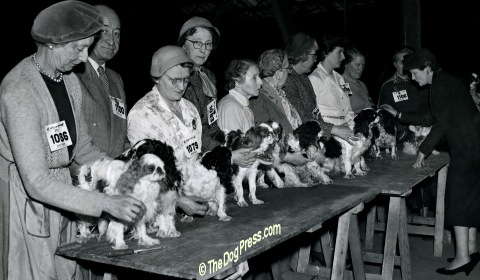 Dog shows were booming, especially in England as shown in this 1957 photo of Cavalier King Charles Spaniel judging.

So the AKC hired field representatives, who were paid a good salary, benefits and a pension. There was lots of money and so the AKC could afford to hire lots of professional staff people in the area of public relations, advertising, communications, law etc.

Then the market changed, other for-profit registries were created without the AKC's rules and regulations. Also people went back to their local municipal pound or breed rescue group to obtain their dogs. The number of dog breeders increased but registration fee income was down, so the AKC looked around and sought a new cash cow.

Where would the money come from? Financial concepts were discussed; the AKC could operate an online dog show registry very easily – but the dog show superintendents organized a group and vigorously opposed that. Fees for dog show judges applications and expansions, were opposed by the dog show judges groups.

The AKC finally looked in the mirror and remembered the old financial discussions. The dog show operation would have to pay for its own operation, the same as the registration department.

Every other sport has a professional and an amateur separate operation. But in the wonderful world of the sport of pure-bred dogs a talented “amateur" can compete alongside a seasoned million dollar a year professional dog handler, and even win. I put the word amateur in quotes since a person who has been a dog breeder-owner-handler for five, twenty or thirty years has long since lost their amateur awkwardness.

Three years ago, the AKC website changed dramatically. For one, the prior concept of bringing potential dog buyers to local or national dog club breeder members was changed and re-routed to the AKC Classified Breeders Display. The change is great for commercial dog breeders who receive more potential buyers for their advertising dollars.

The 5,000 dog clubs with their armies of dedicated unpaid volunteers and once a year dog breeders saw the potential dog buyer's inquiry volume dry up to ten percent (10%) of the pre-change volume.

The 500 staff employees in the corporation known as the AKC have a different viewpoint, a corporate outlook different than the 5,000 volunteer dog clubs that are affiliated with the AKC. The three staff lawyers were hired to protect the AKC and its employees – not the sport of pure-bred dogs or its participants.

The AKC claims that five years is the average amount of time for a dog breeder to participate in the sport of pure-bred dogs. Dog feces, I say, based on my personal thirty-six years in the sport. Local breed clubs and national parent breed dog clubs do have a higher turnover than all-breed kennel clubs, which is to be expected in any leisure time activity. I personally know many people who have enjoyed thirty, forty or more years in the sport of pure-bred dogs.

Ms. Gloria Setmayer was a member of the Kennel Club of Northern New Jersey from 1967 to her death in 2005. Gloria was not a dog show judge, nor a professional dog handler, but she had bred Pomeranians. She enjoyed dogs and the sport of dogs and was a valued member of her dog club for 38 years. Rusty Short (previously Rusty Cunningham) has been a member of the Akita Club of America since 1964 and is still out there every year handling the big Akitas. The membership rolls of other dog clubs contain many people that quietly help their dog club and the sport of pure-bred dogs grow and flourish. How long will that last?