Gary, Kim, and Michelle Steele were expelled at the May 7, 2014 General Meeting of the American Boxer Club for neglect of a dog. 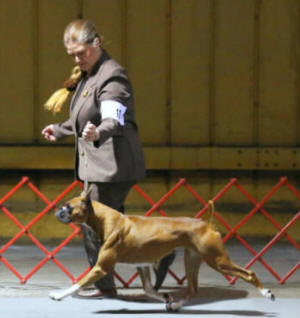 The issue now remains, what will PHA (Professional Handlers Assoc.) and the American Kennel Club do. Most people I know are disappointed with AKC's attitude of benign neglect or plausible deniability when it comes to issues that require disciplinary action against the favored.

In many cases, people unknown to the dog fancy are suspended, often for what sounds like negligible AKC rule infractions. But in other cases, when serious actions involve big names, the American Kennel Club falls back on that tired old saw of "being a registry body only".

If that is true then they should cede control over to the Superintendents and only register dogs.

They cannot have their cake and eat it too by suspending some and not others who are perceived as being equally guilty of the same bad conduct.

It makes AKC look bad when it is engaging in rule making but then does not enforce said rules.

I was moved by your interview with Davin McAteer who was a good friend of my ex from the Ted Young era. Davin was prophetic in his comments about how the care of the dogs has been left out of the dog show sport.

I have now lost two dogs in the past 10 years to handler neglect. I am just getting over the horrible death in late January of a 3 year old show bitch in a handler’s care.

I found out after the fact that she was the second dog to die and among over 4 dogs that were returned to owners in very poor condition due to handler neglect in one year.

The belief that AKC bears culpability in this because of the increased number of shows and the emphasis it now puts on records and awards is sad.

Handlers are so busy running from show to show that caring for the dogs is an afterthought. AKC refused to enter the issue until the club actually expelled them which has now happened.

In the meantime, they continued to show dogs. (editor’s note: see Mary Wild coverage below wherein the same issue was raised. Police officers, firefighters, etc. are in fact suspended pending investigation.  In the dog show world, they can and do continue to do harm while AKC decides what to do, if anything.)

Everyone is talking about this. What kind of message does that send? The American Kennel Club needs to get back to upholding its Mission Statement and to impartially overseeing conduct. Public image is important and while exposure troubles some people, it is all over social media and worst of all, much of it is true.