Visiting the AKC Board, Senator Rick Santorum (PAWS co-sponsor) picks up $29,000 in donations from AKC Officers. 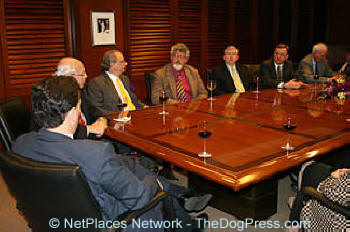 Members of the AKC Board of Directors and staff listen to Senator Rick Santorum discuss the Pet Animal Welfare Statute of 2005 (PAWS) during his March 13, 2006 visit to the American Kennel Club.

The following donations to Rick Santorum's reelection campaign were reported to the Federal Election Commission in late March 2006:

On March 17th, Rick Santorum posted "PAWS II" on his personal website. The document has no legal or official legislative status. Three months later it hasn't appeared in the Congressional Record, and won't unless Senator Santorum introduces it as a new bill, or an amending substitute to S1139.

Should the bill receive a fair review in a Senate committee hearing, it will come under heavy attack for its new, alternative "dealer" inspections. The change is very clearly anti-competitive and has been structured to give the American Kennel Club (AKC) a market advantage over other canine registries. That same provision has caused the Doris Day Animal League to reverse its earlier support position and oppose PAWS. HSUS's support continues.

Can AKC's management buy its way out its competitive problems by collaborating with animal rights leaders, while simultaneously hurting other registries and its customers? Only if we let it.

Anti-hunter, anti-breeder HSUS CEO Wayne Pacelle has already donated $6000 towards Santorum's reelection and promised the support of his organization's 300,000 PA members on November 8, 2005. The animal rightist's anti-hunting efforts are well documented and widely circulated within the sportsmen community. This is his latest general public pronouncement,

"The entire animal rights movement in the United States reacted with unfettered glee at the [Fox Hunting] Ban in England ...We view this act of parliament as one of the most important actions in the history of the animal rights movement. This will energise our efforts to stop hunting with hounds." Wayne Pacelle, CEO, Humane Society of the US (HSUS), London Times, December 26, 2004

The Keystone State has approximately one million licensed hunters. Time will tell how this much-watched 2006 political campaign plays out, but S1139 PAWS and HSUS will be huge factors, in SAOVA's view.

Last month, AKC delegates reelected the director who has been the most outspoken supporter of PAWS. Ken Marden, the GSP Club director who had voted against PAWS, lost his reelection bid, leaving no performance dog owner on the AKC Board. Rick Santorum toured AKC's offices the day of the vote, perhaps campaigning.

Working to identify and elect supportive legislators ** NO PAWS **

http://saova.org/1139.html (sorry, link and/or webpage has been changed)

Editorial comment: Nearly a decade has passed but thankfully, PAWS did not.  Today's political entities are more circumspect, fearful of niche internet reporting such as TheDogPress.com.

Reference & Related Article and Information, dig for gold below

Even more frightening than what is revealed on the PAWS INDEX is...

HSUS has been putting people into key government positions, like the IRS and USDA both of which are a threat to dog breeders.  Get information on the HSUS, IRS, USDA APHIS Connection