AKC vs Boulton - Part I

MAN FOUND NOT GUILTY AT AKC TRIAL BOARD

THEN HAS HIS AKC PRIVILEGES SUSPENDED BY AKC BOARD OF DIRECTORS

BIS judge George Boulton publicly embarrassed and humiliated by AKC, his dog show judging privileges suspended for one year over a TV show! 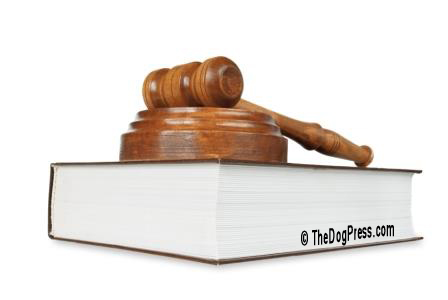 In honor of April Fools, the AKC board decision was made without any hearing and Bolton's suspension publicized even before he had opportunity to file an appeal.  An appeal is provided for "in accordance with the AKC’s own procedure".  This is after the March 29, 2006 AKC South West Trial Board had spent sixteen hours over two days time trying the case of AKC vs. George Boulton and then dismissing the identical charges on the grounds that the charges were not sustained.

George Boulton is a well known and previously well respected dog fancier and Best in Show approved AKC dog show judge. Boulton was formally charged by the AKC with involving himself in a television show called Show Dog Moms and Dads, and in so doing, allegedly making statements detrimental to the sport.

Three members of the AKC South West Trial Board sitting in Fullerton, California on March 29, 2006 spent two entire days hearing the case. The complainant, the AKC, was represented by an AKC staff attorney, Ms. Heather McManus, Esq.  Ms. McManus has been an AKC employee and attorney for over ten years and has prosecuted many cases before AKC Trial Boards. The defendant, George Boulton was present and represented by attorney Lonnie Kocontes, Esq. of Mission Viejo, CA. Several witnesses were brought in by both sides from Florida, Washington and other locations.

The AKC South West Trial Board spent sixteen hours hearing the case, questioning witnesses, reviewing documents, and then rendered its nine page opinion dismissing the AKC charges. Please read their written opinion yourself (provided at close of this article), a written opinion by three trial board members who are our fellow dog fanciers, exhibitors, dog show judges and practicing attorneys.  These three trial board judges processed George Boulton’s case and in the end, they dismissed the charges against George Boulton on March 29, 2006. George Boulton was given a full and fair hearing.

However, by letter dated April 18, 2006 the AKC informed George Boulton that the dog show judging operations staff was recommending that disciplinary action be taken against him at the May 8, 2006 AKC board of directors meeting for conduct involving himself in a TV show called Show Dog Moms and Dads, and in so doing, making statements detrimental to the sport.

These are the identical charges that the AKC had brought against him at the AKC Southwest Trial Board hearing, charges which had already been tried and dismissed.

The thousands of people who view the AKC website each day can read the May 8-9, 2006 AKC Board of Directors meeting minutes public notice which states “The Board considered a report that George Boulton appeared on a television show where he made derogatory and inappropriate comments about judges. The Board VOTED to “suspend Mr. Boulton’s judging privileges for one year effective June 9, 2006.“ George Boulton was not given the opportunity to present his side at the May 8-9, 2006 AKC board meeting. George was not given the chance to defend himself against the very same charges which the AKC South West Trial Board had already dismissed after a two day hearing.

George Boulton has been publicly shamed, humiliated and suspended by the AKC board of directors despite the fact that those charges were dismissed by the AKC South West Trial Board, after a full and fair hearing.

Poor George Boulton. If George Boulton has any money left after defending himself at the March 29, 2006 trial board hearing, he can retain a lawyer and file an appeal of the AKC Board of Directors decision of May 8, 2006. He would appeal to the AKC Board Appeals Committee. The three-member Board Appeals Committee would then render a written decision. Of course, “Any recommendation by that committee will require the approval of the full AKC Board”.  The same full AKC Board that revoked George’s judging license approval on a staff recommendation without giving him a chance to defend himself. A one sided AKC Board decision.

Come, let us have a dog show. The dog show judges will award the ribbons first, and then people will bring their dogs in. Kafka will officiate, or the members of the AKC board of directors can.

Read the written opinion of the AKC Southwestern Trial Board (see below). A document written after a two day sixteen hour hearing, with lawyers on both sides presenting their case, documents, and witnesses. The written opinion written by our fellow dog show fanciers, people like us that go to dog shows, enter dog shows, judge at dog shows, steward, direct traffic, pick up poop and help to make the wonderful sport of pure-bred dogs what it is. AKC's own appointed Trial Board!

George Boulton was badly treated by the AKC. He was treated like a low cur, his dog show judging license approval suspended by the Board, without trial or representation, after the same charges were dismissed by an AKC Trial Board.

AKC vs Boulton Part 1 The charges  Trial Board Findings The only public copy.