Have AKC Dog Shows changed from a breeder’s venue to a political playground for handlers and the elite? TheDogPress needs your feedback for 28,000 subscribers.

The American Kennel Club was founded in 1884 by a small group of wealthy men to compare and improve breeding stock. In order to do so, they had to keep track of wins and pedigrees.  That led to formation of the AKC, conceived as a "club of clubs" to formalize budding competitions across the country. It was a great and noble beginning.

Prior to WW II, the sport of breeding and exhibiting purebred dogs

was defined by the comfortable rich with time on their hands.  As Americans prospered, more families could afford to keep dogs as pets rather than for utilitarian reasons.  By the fifties, AKC shows had become a gathering ground where common folk could socialize and show off their pets.

By the sixties purpose-bred dogs were becoming a historical footnote

Dogs were still judged on functional ability but esthetic beauty became paramount as women moved from the whelping room into the show ring. Women's rights became fashionable along with new stylized grooming techniques. Dog Shows had not only arrived, they became a family sport and women began to take dogs all the way to top honors.

AKC Dog shows in the seventies and eighties Americans became urbanized, worked shorter hours and had more disposable income.  Gone were the days of 300-dog shows where an owner handled dog could win the Group. Junior Handler classes were AKC recognized in 1971. By the end of the 70s celebrities and movie stars became associated with purebred dogs and the dog fancy was "in."

AKC began licensing handlers, giving them a big boost of political power with judges. Professional handlers dominated the "specials rings" and judges dinners became the "in" place to be after the show.

Puppy mills were gestating, about to be born as Vietnam vets received federal funding and began raising dogs. Dogs and everything connected with them became a bountiful money crop.  An unimagined future was in the offing. Rare breeds were formalized by organizations such as ARBA, the American Rare Breeds Association.  Roadside signs proclaiming "AKC Puppies For Sale" had yet to reek of commercialism.

By the nineties politics and PHA handlers controlled the sport

Entries were averaging over a thousand dogs. Billy Lyles sued the AKC for refusing to renew his handler's license.  As a result AKC licensed handlers became history but the PHA (Professional Handlers Association) quickly took control of the show ring, arranging judging assignments through their respective dog show clubs.  Politics had always existed but "getting hired" became a way of doing business.

Honest show breeders advised exhibitors to get a handler because it would take a decade of education and learning to "network" with judges before they could win as owner-handlers.

The military and college internet grew and in 1998 TheDogPlace.org launched as the world's first dog-site. (ref #1).  The United Kennel Club (UKC) was unchallenged in hunt and field events and the American Kennel Club was the king of conformation. Peripheral registries had yet to be defined, much less considered as alternatives.

Looking to the future, the non-profit American Kennel Club led the way to profit for all. Kennel Clubs (local dog show events) followed suit. What was once free or considered part of a show or service was now for sale.  Everything from parking spaces to points verification came with a price tag.

Hand-recorded registrations, pedigrees and show records became a part of history as the AKC finally became computerized - and costs went up. Top Ten Winners lists created an explosion of advertising based on win records. Dog show magazines flourished with color ads promoting top winners.  Whereas in the past most exhibitors were breeders, an increasing number of buyers only wanted to show, in many cases because expenses became a write-off for the wealthy.

And then there was the new millennium of Dog Sports!

The year 2000 brought/wrought changes that came with blinding speed.  In a February column, AKC judge Sari Teitjen astutely noted "AKC support of and commercial alliances with the commercial pet industry... has led to an erosion in confidence..." and a "declining interest in AKC registration..."  Even Wayne Cavanaugh, AKC VP, was critical of AKC's failure to define its positions and the value of registrations as its primary product.

Indeed, AKC's obligation to the purebred dog became blurred by commercialism. That said, the American Kennel Club countered the animal rights rhetoric that "shelter mutts are healthier" by stressing that a well bred purebred dog is created by breeders who understand and apply genetics. The animal rights groups were forced to change tactics.

TheDogPress.com launched in 2008 and for the first time in history, the Ivory Tower was held widely accountable. Previously whispered secrets became public knowledge.

When Designer Dogs hit the market TheDogPress.com countered careless breeding by promoting the well-bred purebred and exposing AKC's deals with the puppy mills.

In 2015 the AKC Canine Health Foundation joined the PR campaign to promote the value of purebred dogs. The stagnant OFA (Orthopedic Foundation For Animals) moved forward under new leadership (dog man Eddie Duzik), furthering the concept of health and genetic testing. The public began to understand the importance of genetic quality created by a purebred dog breeder who loved dogs more than money. 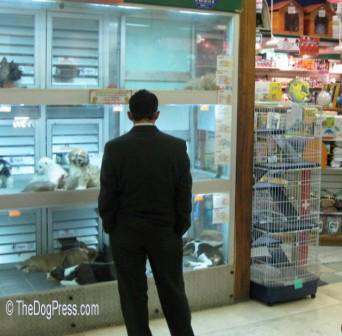 The 21st century dog must not become a crop; a product hawked by an AKC that has forgotten its avowed Mission.  The purebred dog of the future must be marketed by breeders who truly understand its value.

For most of us "A boy and his dog" is a part of American history, not because of AKC or any other registry.  The family dog was a precious part of childhood for both city and farm kids, and whether purebred or mongrel, it was a DOG, not a product.

2020 will define the future of the American Kennel Club

Our parents took for granted what we now must fight to preserve.  As handlers, trainers, veterinarians, breeders, dog writers, do we accept the mass production and marketing of the purebred dog or should we choose another profession? We can not profess to love dogs and accept that dogs mean only $$$$$ to others.  Would you sell out your best friend for a business deal?  Would you betray your heritage for another "endorsement" fee?  Would you?

The 2020 AKC Board Elections will be upon us again in May.  How will your Delegate vote?  Do you have a commitment from the candidates to put the American Kennel Club's 1884 Mission first, before profit, production, and puppy mill income?

Are we too little too late?  Do you still believe in the AKC's glorious history and will you step up to protect the future of the purebred dog?  Does your dog club hold its Delegate accountable to the wishes of the majority of members?

EMAIL THE EDITOR with your responses to the above questions!