Is Your Breed Club Under Attack?

The American Kennel Club is clubbing its parent clubs and your Breed Standard may be next as radical policies ooze into the AKC’s politically correct agenda.

The American Kennel Club, through commercial sponsorships, continues to build a bridge to the front door of the animal rights activist. AKC now inserts itself into parent club business and interferes with breed standards. This has caused deep divides within parent breed clubs. It seems the new AKC has new interests and has created a stream of revenue that they are not willing to abandon. This quest for revenue threatens parent clubs, weakening control and protection of your breed. Ultimately it can end parent club existence if we do not take notice now.

The AKC is battling national breed clubs for control of breed standards. 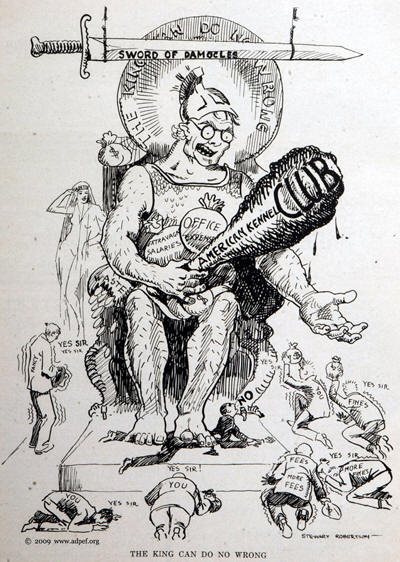 By changing American Breed Standards to meet European standards the AKC rakes in more revenue through foreign imports, registrations, invitational shows and other global events. As is the case with the American Rottweiler Club (ARC) the AKC attempts to add long tails to a docked breed or drop ears to a cropped-ear breed. The AKC often achieves its goal through subtle, manipulative powers.

It begins by encouraging parent clubs to open their breed standards to "clarify" language. Changes are then forced into these breed standards. Please note: A parent club may "own its standard" but once a standard is opened for ANY CHANGE it is only the AKC that has final approval of that club's breed standard.

This is a parent club trap. The American Rottweiler Club is not an isolated incident in AKC’s agenda. All national breed clubs are at risk and some are fighting back!

Commercial Sponsorships = Revenue the AKC is Not Willing to Abandon

Caving in to the “animal rights” agenda is the reason behind changing breed standards as regards cropping ears, docking tails, or any breed-related physical characteristic which can be construed in any way as detrimental to breed health. Your breed isn’t cropped or docked? Fine, but what about structural or genetic defects as perceived by people who know nothing about your breed?

The threat is greater today than ever before and all breeds are at risk. Over the past two decades the American Kennel Club has steadily changed from a registry of purebred dogs to an organization championing the causes of “ALL DOGS.” This transformation of purpose took off in the early 1990's after AKC's collaboration with Pedigree Dog Foods. Breed icons fought this commercial sponsorship program, going on record saying "this will change the AKC and purebred dogs forever." And so it has. Many fanciers remember the controversy over the Westminster Pedigree Commercials. {1} That partnership came with big money and the $$$millions from sponsorships became the AKC's drug of choice.

As with all drugs there are side effects and with every commercial sponsorship dollar comes a responsibility to that sponsor. The bigger the dollar; the bigger the commitment. The new AKC mission became greed instead of breeds. With commercial sponsorships the AKC, as with all "drug addicts", began to lose the ability to choose its own destiny. With its new "partnerships" and its dependence on 501c3 money funneling projects, the AKC lost its identity as a registry. Dog men were replaced by business men. The current AKC acts more like an animal welfare organization instead of a purebred dog registry. AKC loyalists have even managed to turn some parent breed clubs into 501c3 charities for all dogs. With this change those parent clubs now have "TRANSITIONED FROM A SHOW-GIVING CLUB TO AN EDUCATION, HEALTH AND RESCUE ENTITY." Who out there will stand up to protect breed quality and preserve the history, heritage and traditions of the purebred dog?

Today's AKC Is A Risk To Parent Breed Clubs

How far will the AKC go to change your breed? In the past years we have seen the AKC demand (against parent club rules) that albino Dobermans be allowed to compete at our National's Top Twenty event. We have seen them stifle and threaten judges for judging as they see fit, according to breed standards.

The American Kennel Club continues to refuse to approve standards as voted on and indicated by a parent club. The AKC has, to its own benefit, even interfered with parent club business and elections.

Today it is difficult to see the difference between the AKC and the radicals who wish to destroy purebred dogs. One of those organizations which the AKC seems to be imitating is the HSUS. The HSUS has been busy leading the AKC down a path of no return. It has developed a program it calls BARC, Breeders Advisory and Resource Council. This program is designed to fool breeders and the AKC into believing the HSUS cares about purebred dogs. The HSUS BARC program proudly advertises as having AKC Breeders of Merit supporting it. Experts tell us BARC's main agenda is to mandate testing on YOUR purebred dogs.

HSUS and other radical organizations can then make those tests, which include your private personal information, available to the general public, AKC Inspectors, Animal Control agencies, APHIS Inspectors {2}, and other radical animal rights/welfare groups. This makes you and your purebred dogs a target.

Our parent clubs want to do the best for our dogs and many organizations are happy to take advantage of this fact. With this AKC/HSUS direction our purebred dogs are not living any longer and our registrations have plummeted. Gene pools are growing smaller and mixed breeds flourish. Today's AKC is an animal rights dream come true!

A Radicalized Registry or A Breed Club Club?

Sadly, over the years the AKC has become involved in many counter-productive breed club programs. These programs negatively affect the breeds and put their breeders at risk. They mirror many animal rights programs and are changing the purpose of our parent clubs. Through these AKC programs:

More and more clubs are beginning to feel the effects of AKC’s change of purpose and direction. They feel forced by the AKC into betraying their breed and their club. Many are afraid of AKC retaliation if they step out of line. Breeders are becoming suspect of AKC reasons for parent club reprimands and suspensions. Those in-the-know are concerned over suspensions as with the Pekingese Club of America (PCA) which in 2012 received a one year suspension of all events. The AKC suspended the Breed Club’s privileges for an alleged "bylaw noncompliance" concerning an election. It appears that they have used this tactic with other clubs.

Recently the American Kennel Club disrupted the DOBERMAN PINSCHER CLUB OF AMERICA (DPCA) election. According to the 2014 DPCA Pipeline, the AKC was accusing the DPCA of an alleged bylaw noncompliance concerning an election. The AKC demanded the DPCA go against its own constitution and bylaws concerning the election. The AKC attempted to impose a $500.00 fine on the DPCA. Later they increased that fine by five times to a whopping $2,500.00 and threatened cancellation of the DPCA National Specialty Show! {3} In July the AKC Board thought better of the fine and rescinded it {4} but not before the June 11, 2014 letter from James Crowley, Executive Secretary of the AKC was sent to DPCA President Michelle Santana which stated...

... continued in part two; The Letter From AKC, the resolution of the AKC fine, Santana's post to the DPCA membership,

and the important reference links.  If you are already an Insider, just click this link to get to the AKC letter, the DPCA President's response, and the rest of the story.

If you are not an Insider, now is the time to get all of the benefits. $39 p/year gets you access to part two of this explosive article plus a full year of serious news, invaluable research, and Archives Access, including the only source for a decade of Suspension and Discipline records and much more, including an automatic free listing in the net's first and only privacy protected Dog-e-Book Directory of Who's Who In Dogs!