THE TAIL WAGS THE DOG! 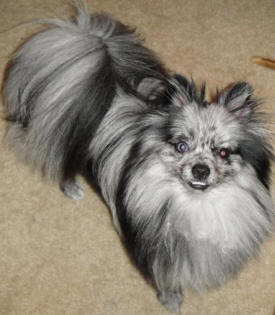 AKC suggests a 2/3 supermajority vote to approve any changes to important documents like a breed standard. Most clubs include such a stipulation in their by-laws. One would assume that to ADD a new pattern description into a standard, the APC membership would have to approve the measure with a 2/3 majority vote. Right?

Well, throw that assumption out the window. In this case, a very vocal minority was allowed to prevail. The American Pomeranian Club recently approved a revised breed standard. The club members are being told by the APC board of directors that the updated standard will include this statement in the pattern section:

Merle – Blue, Chocolate, Sable. A base color with contrasting lighter and darker areas giving a mottled appearance on allowed colors or patterns.

APC members were TOLD, not ASKED, that this merle description will be added to the standard....without any vote of approval! This is in direct violation of the club’s constitution and bylaws. Lack of disqualification does not equate to acceptable. A DQ that fails to attain supermajority vote status does not legitimize an existing problem, it merely spotlights the issue.

Since the beginning of the modern breed in the late 19th century, a merle pattern description has NEVER existed in any written standard; and there has NEVER been historical documentation to suggest that merle Pomeranians have ever existed until recent years. Neither is merle an allowed or described pattern for Pomeranians in any other country in the world!

Ignoring the will of the overwhelming majority of club members, a minority opinion was apparently sufficient justification to add in new verbiage describing blue merle, chocolate merle and sable merle. (Sable merle?  Which color class do I enter?) Claiming direction from AKC, the APC board of directors added a completely new pattern description into the Pomeranian breed standard WITHOUT a vote of approval! How was this accomplished?

Mari-Beth O'Neill is AKC's Assistant Vice President of Special Services and was the club's advisor for the standard revision process. When questioned regarding the legality of the addition of this pattern description, Ms. O'Neill responded:  “The membership was provided with the description of the merle pattern as it is what was voted on as the DQ on the ballot.  The statement that followed explained if it failed that description would be added to the Pattern description.  I realize what a controversial issue this is for the breed, and fully appreciate your concern.”

Supporters of merle Pomeranians observed what happened with the recent Chihuahua standard revision. They noticed how the DQ for merle was narrowly defeated by presenting it as a separate, line-item vote. The APC board polled its club members and discovered that they fell short of a 2/3 majority support for a DQ for merle...and so, "Monkey see, Monkey do".... the standard ballot was presented  with separate line-item votes for ONLY the color section items. Seemingly the APC board wished to avert a very controversial DQ by presenting it as a separate item, as they were aware from polling that it was unlikely to attain a 2/3 vote as a stand-alone measure.

APC's board of directors is composed primarily of a group who ran as an independent slate in the last club elections. Proclaiming a "commitment to communicate", some of the current board members have instead revealed their true agenda....control of the standard revision that was in progress at the time of the club elections nearly two years ago.

This board has sliced, diced and served up a different recipe than the standard revision committee originally presented. Several membership polls were taken, but there was no poll regarding adding a completely new pattern to the standard! And now, nearly two years later, just as their term is about to expire, they present the standard for a vote....waiting as long as possible for newer, more "progressive" members to join the club. (There is no waiting period, new members may vote immediately.)

Thankfully, there is no other country that allows or describes merle Pomeranians in its breed standard; including FCI countries, The Kennel Club of the UK, and the Canadian Kennel Club. Merle Pomeranians have only recently been seen in the breed, and even more recently in the show ring. The current AKC standard states that all colors, patterns and variations thereof are allowed. The patterns are then described in detail, but merle is not described. Thus, merle breeders and owners have "pushed the envelope", showing merle Pomeranians under a loophole in the current standard.

Merle brings several distinctly linked health problems into the breed....the strong probability of eye defects and deafness when a dog is born with a "double dose" of the merle gene. (see photo above).  While most caring and educated breeders would not intentionally breed merle to merle, the gene can be visually undetectable in some dogs with excessive white coat, or in the red, orange, cream or sable colored specimens that comprise the majority of the Pomeranian gene pool. Accidental or perhaps even intentional merle-to-merle breedings have already happened, as evidenced by double merle Poms recently entering Pomeranian rescue. We will likely see more of these cases in the future, particularly if the pattern is legitimized by inclusion in the breed standard.

Citing concerns about crossbreeding that likely brought this new pattern into the Pomeranian breed, APC member Mari Iffland noted: "This issue will not end with the vote.  It has divided the club in half and its unlikely things will ever be resolved.  Regardless of how the vote went . . . it did not change my mind about where the merles originated, and I'm sure I am not alone in this.  All it does is destroy our faith in the parent club and the AKC."

This revised standard has been submitted to AKC and is slated for discussion at the October board meeting. The voters have spoken and their voices should be heard.  But; should the APC insert a merle description into the standard when the majority of club members are opposed? Such an addition should only be allowed upon approval by a 2/3 majority vote of the club members.

This standard revision represents years of hard work by many people. All that is needed to rectify the situation is an additional ballot on ONE item. The AKC board should direct the American Pomeranian Club to conduct a separate ballot on the merle pattern description issue prior to finalizing the new breed standard. Such action would exemplify the AKC motto: "We're more than Champion dogs. We're the Dog's Champion".

Gladstone Letter to CCA Members See the letter by Steven Gladstone, who interfered with Chihuahua Club Of America ballot to DQ merle color, using his AKC and AKC/CHF Board positions.

Chihuahua Breeder Rebuts disqualifying merle colored, defends genetics, breeds, shows, and wins with the color and thanks Gladstone for his letter to Chihuahua Club Of America members.

World Bans Merle Chihuahuas but CCA voted down merle DQ following ballot interference by AKC Board member.  Other countries refuse to register any dog out of merle parents.  American Breeders unable to export.