This dog show entry form deceit was exposed by TheDogPress in 2002 and led to the AKC Show Operations interview but we've heard that the entry form "mistake" is back in play in 2015.

We invite your COMMENTS below but first, this background.  The breeder-owner of two top winning, top ranked dogs looked at the panel for the Supported Entry shows at Louisville and decided to go IF a certain male special wasn’t going to be there. She entered, booked a flight, and waited. When the returns showed only her dog and one other known male special, she and a friend confirmed their flights.

Imagine Kathy Schoeler’s surprise when the dog that she knew wasn’t entered appeared at ringside and was shown! Quoting from Mrs. Schoeler’s letter to AKC “The Superintendent (Onofrio) was called to ringside and was told by ______ that there had been a mistake and that #16 was a dog, not a bitch. The Superintendent made the change in the judge's book from a bitch to a dog.”

The letter continues “The Superintendent was questioned about the substitution and stated the only change they were told to make was from a bitch to a dog, that (the handler) had made a mistake on on the original entry form and therefore they made the change.”

Darrell Hayes, Assistant Vice President of Judges’ Operations, and certainly a person of authority, was at the four-show cluster event. He was asked how the dog could be shown when everything, including the registration number on the original entry form, was for a bitch. Mr. Hayes said there was nothing he could do to stop the dog from being shown (true) and he suggested that the angry exhibitors write to Barbara Schwartz, Assistant Vice President of Show Operations.

Mrs. Schoeler contacted TheDogPress.com and explained the situation, furnishing the editor with a copy of the letter of complaint. There were several other official complaints filed by exhibitors. Mrs. Schoeler was more than a little confused and upset, based on a personal experience in which she could not show her top special’s dog when she had accidentally printed his litter brother’s /two-digit number at the end of the otherwise correct registration number and entry form.

Mrs. Schoeler said “The Corrections Form is just that. It is to allow us to correct a mistake such as name spelling, d.o.b., breeder, etc. The assumption however is that it is an error having to do with the actual dog that is to be shown. The purpose of the corrections form is NOT to change which dog is entered.”

Our editor agreed and thus began a complex investigation. There exists an unwritten guideline that allows two corrections to an entry form - any more than that is automatically suspect according to one of the dog show superintendents we contacted. TheDogPress.com learned that the Superintendent could not have prevented the dog from going into the ring although there is some debate as to whether or not the AKC Rep could have tactfully discouraged the dog from being shown over the next three days. The judge’s responsibility is to focus on what goes on in the ring so it is not within his/her jurisdiction to question changes in the judges’ book.

This entry form mistake was perceived by those present as deliberate trickery. The "dog that wasn't entered" was the current top ranked dog in the breed and a sensible person would think twice before making a long flight to show against an outstanding dog under judges who have previously expressed appreciation for the dog.

Common sense and honesty notwithstanding,  AKC ruled that the wins stood even though the registration number on the original entry form was that of the bitch, causing the Superintendent’s computer to print the bitch’s information in the catalog. The handler was allowed to make a correction to the registration number so that the dog could be shown.

It is alleged that the handler, hoping to induce unsuspecting exhibitors to show up with their male champions, and being very aware of how the system operates, may have deliberately put the wrong information on the entry form so that the entry would show a bitch special entered and not the dog that she was bringing. No one will ever know but we feel certain that such situations will be looked at closely by AKC in the future. 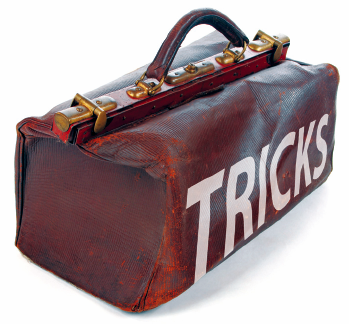 Unscrupulous exhibitors and handlers have an unimaginable bag of tricks. Continuing to enter a finished dog in Open is not forbidden but doing so show after show and then going to the Super’s office to “move the dog up” is a bit more inventive and should raise questions in the Super's office. Web information or printed returns will indeed show fewer dogs of that sex entered in Best If Breed competition. The Champion is then “moved up” through a correction to the entry form made the morning of the show. The judge is completely unaware of the ruse so there is no disadvantage in the deception.

In same-color breeds, substitution is not uncommon. Breed supporters and even some judges who later may see the actual dog are left to wonder how “that dog” finished.  Dogs that finished by proxy are seldom seen again unless owned by a novice so blissfully unaware of the handler’s dishonesty that they decide to show off their new champion by owner-handling the dog.

Kathy Schoeler, owner of the #1 Breed Points dog and also the #1 (bitch) in All Breed points, both being shown simultaneously, pointed out that she could have entered her Best In Show bitch’s information but used the top breed dog’s registration number and then just decided which dog to show upon arriving at the show and assessing the competition and whether the breed points were more important for the dog or the chance for a Group win were more favorable for the bitch. Handlers with a full load are less likely to employ that particular deception but unfortunately, it happens.

The superintendent’s are aware of such dishonest tricks but they are obliged to accept “corrections” at the handler’s word and leave it to AKC to monitor the frequency with which such errors are made on that handler's entry forms. Does that happen? See the AKC Show Operations interview and decide.  Is blatant deceit accepted rather than stir up a possible lawsuit?

Your editor was unable to reach Darrell Hayes for comment but Mrs. Barbara Schwartz, Assistant Vice President of Show Operations, was politely and professionally willing to discuss the matter. On that basis, we asked for an interview and AKC agreed. You will find it interesting and informative.

Read the interview and then share your opinions in COMMENTS which the webmaster set up especially for "entry form deceit".  What other deceptions or tricks have you heard about? We can assure you that AKC would like to know the answers so that Show Operations can close the loopholes.