BEST FRIENDS and THE PROCESS

What was Best Friends Sanctuary? Does Satanic cult, The Process Church, Michael Mountain and animal sacrifice ring a bell? Animal rights hypocrisy at its worst!

A former worker at the Utah Best Friends Sanctuary provides first-hand information about The Process Church, Michael Mountain, Scientology, Ron Hubbard... He only gave his name as "Skepticaltheurgist" but we will refer to him as "Skeptical" from this point forward. He emailed "Sometimes you uncover a real gem in cyberspace.  I felt like I had found the Hope Diamond when I ran across your Best Friends coverage.  THE REVOLUTION begins this weekend. Enjoy!"

We asked for more first-hand information and he agreed on the stipulation that we not reveal his identity.  He led off with the following:

"I don't know if you knew but In March 2004, the Rocky Mountain News outed the people running Best Friends Animal Sanctuary in Kanab, Utah, as The Process (church) in its latest incarnation.  The "Cone of Silence" had been raised, and the Best Friends management felt the need to 'fess up. A few days later, Best Friends added a section to its website, mostly written by Michael Mountain and giving their own version of the past. This is still (as of August 2005) available see LINK. (the page to which he refers was of course immediately removed upon publication of this article.) 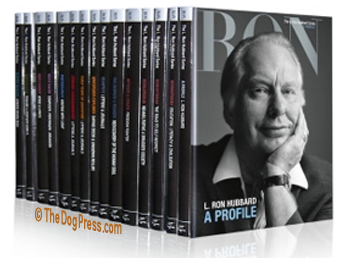 "Reading your coverage, I had a strange sense of deja vu, from around 1969. In that year, the Sunday Times in England picked up the story of how in the late 1940s L. Ron Hubbard, before starting Dianetics and Scientology, had been involved, magically and financially, with the rocket fuel scientist and noted Thelemite, Jack Parsons. The newspaper had learned how, after some ritual workings to create a magical Moonchild, Hubbard took off with Parsons' girlfriend, a boat they'd all invested in, and a bunch of cash. It was classic Fleet Street muckraking at its salacious best.

"Scientology's response was a glorious farrago of a letter to the Sunday Times that began: "Hubbard broke up black magic in America..." Ron, it turned out (according to the Church of Scientology, and quoted in Russell Miller's Bare Faced Messiah) had been sent in by the U.S. government to smash up this dangerous ring of occultists with which Parsons was involved. Naturally, he succeeded magnificently. A stolen girlfriend? No, not at all. "Hubbard rescued a girl they were using."

"In sum, the facts were all covered off. It was only the truth that was missing in action.

"I recall Michael Mountain (Father Aaron as he was in the 1970s) as a charming man who was often irreverent, and fun to be around. The Best Friends account of the early days shows he still has the ability to charm, even if, as with the C of $ story about Hubbard, the truth and the facts have some distance between them.

"It might be unfair to critique details almost 40 years after the events happened, but I feel otherwise. When someone publishes 8,000 words of well-spun baloney, a theurgically (and otherwise) skeptical person like myself can't resist teasing it a little. 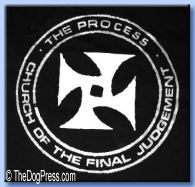 "The primary fiction is that The Process Church consisted of a bunch of 1960’s counter-cultural seekers, consensually choosing a bohemian, back-to-nature lifestyle. No-one who left England for the Bahamas in 1966, then went on to the Yucatan and Xtul was arguing about it, but the cult-like nature of the group is carefully erased in Mountain's description. Does anyone recall the alliterative headlines in the British press about "The mindbenders of Mayfair"? Only me, it seems. But then, back before I joined, I collected all this coverage religiously. (the secret Process Church insignia was provided by the writer in 2005 but by 2010 it was in google images)

"And while Robert De Grimston is airily dismissed as "the so-called 'Teacher' of The Process, who had written a number of books and was becoming well known in academic and theological circles," his wife Mary-Ann (see Mary-Ann's photo and Moon Unseen, from June 2005) remains "She Who Must Not Be Named". The Goddess of The Process, its core, is unmentioned in its own published history.

"And so it goes on. What, us spread Robert's teachings all over Europe and North America? All of us wear the Cross and the Goat of Mendez on our chests or collars? Go out every day and sell those books by the "so-called Teacher"? Musta been some other guys, or some other so-called Teacher.

"Even when I was in The Process (1970-72), the legend around d Xtul, "The Place of Miracles" was being embroidered. An abandoned salt factory became a Mayan ruin, for example. Away from their civilized backgrounds but living still in a soup of heightened consciousness, people had let their inner barriers drop and insights, synchronistic happenings and visions came in plenty. The primal presences or psychological realities called the Gods of The Process made themselves felt.

"Beyond that blanket statement, or something like it, I doubt anyone today could give a fair account of the weeks and months spent at Xtul. The three ex-members whom I've interviewed all give varying stories.

"Mountain's account adds a fresh spin. As the group came to Xtul, he says, they encountered an old man who "just smiled and said, 'Es para vosotros,' ('It is for you.') And he waved good-bye and continued on down the trail."

"Neat - except, as anyone who's learned Spanish finds out, "vosotros" as a second-person plural form is today used nowhere in Latin America, only in Spain itself.

"Later, the same man appeared and Mountain says, "as The Process we’re all pulling out."

"'You are leaving,' he said. 'But one day there will be another place for you. It is a beach without an ocean. And the sand is all red. And there are animals. Muchos animales.'

"For someone who had never seen red rock canyons and the pink sands that go with them, it was a fair enough description of Angel Canyon, the future home, 20 years later, of Best Friends Animal Society."

Editor's note: It has been 18 years and Best Friends has evolved. It is now richer than ever and presents a wholesome image to potential donors.  Perhaps the founders have all left the "church" and "the Process".  Perhaps not...