Dubbed The Puppy Mill Bill, it requires pet stores to only sell dogs produced by puppy mills, unscrupulous breeders or dogs imported from other countries.

On October 13, 2017 Gov. Jerry Brown signed ii Assembly Bill 485 Summary the Pet Rescue and Adoption Act. The URL for the Act is below.{1} It was approved by a 32-0 vote. In reality this name is a feel good title which actually supports the very businesses California proposes to limit, puppy mills. The trafficking of rescue and shelter dogs has become big business and California seems to be a leader in this unregulated industry. With the Pet Rescue and Adoption Act, CA is a top supplier of poorly bred and often-times unpredictable dogs.

Matt Bershadker, president and CEO of the ASPCA, stated “By prohibiting the sale of commercially bred dogs and cats in pet stores, California will cut off the supply of inhumanely bred puppies into communities across the state, and prevent consumers from unwittingly supporting this cruel industry.”

Homeless dogs are not coming from the responsible purebred dog breeder. The numbers of purebred dogs are down to a mere fraction compared to fifteen years ago. Many breeds, due to legislation from misinformed legislators as in California, are disappearing.

Although there are fewer and fewer quality purebred dogs, the number of “rescue” dogs are increasing. Why is this happening? Dogs are brought by the thousands into the United States each month. Everyone wants a feel-good “good deed” title. With rescue backed by state legislation, such as in California, puppy mills now have the ability to move and sell their stock like never before. 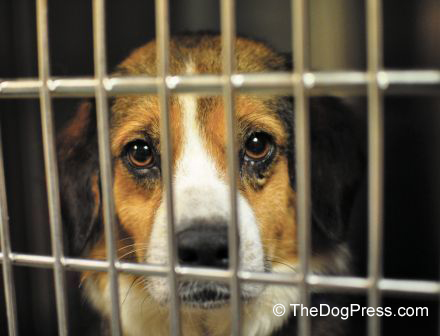 As a tax deductible non-profit business, “rescue” has become a profitable distributer for dog traffickers and puppy mills. Today large scale “pet collectors” travel over the country buying and selling homeless dogs.{2} The demand is so strong for rescued animals, traffickers have been known to buy puppies and older dogs directly from puppy mills at a discounted price. With no restrictions or regulations the rescue organizations can sell puppy mill dogs as ”rescue dogs” with  no guarantees, no refunds and no consumer protections.

Adoption fees and donations are non-refundable. Rescue contracts stipulate that the dog be returned if it does not work out. Once returned the dog can be sold by the rescue many times over.

The internet is filled with tens of thousands of rescue sites and hundreds of thousands of individuals all over the world who call themselves “rescuers”. With billboards along the highways and choreographed TV commercials it is difficult not to be sucked into this marketing scheme. Today it is near impossible to meet a new dog owner that doesn’t start a conversation with “you know he is a “rescue”.

In the past hour, while writing this article, I have heard three commercials targeting owners of “rescued” pets. One commercial was from a supplement company instructing owners of “rescues” to feed their supplement to all rescued dogs for six months. The company claimed that it would make these sick dogs healthy. The second commercial was for a company selling DNA testing for “rescue dogs”. They claim it will help the owner in training and diagnosing health problems. The third was from a shelter that stated if you want a “SUPER PET “ADOPT” A SHELTER PET!” Let’s be honest dogs do not end up in shelters because they were someone’s “super pet”.

The truth is if you want a super pet you do not have to buy a supplement to bring your dog back to health nor be financially burdened with expensive test to find out what breeds are in your dog. With health conscious, purebred dog breeders you can start out with a healthy pup. You can learn, free, from your breeder about the health, proper care and training for your dog. With a certified AKC or UKC pedigree you know what your dog is and who and where it came from.

There are no radio commercials to promote them. There no television ads asking for money to support them. There are no billboards to advertise them, just dedicated breeders who fight to preserve the well-bred purebred dog so the world can enjoy them.

In conclusion, not all rescues and shelters are using their non-profit status for profit. I firmly believe in local shelters and rescues. If you are someone truly looking to give a home to a homeless pet, I suggest contacting your local shelter but make sure the shelter accepts only local strays and pets. Choosing a local dog to rescue improves your community, not a middleman.

If shopping for a particular breed, check your local breed rescues or contact the NATIONAL BREED CLUB and talk to breeder-members who are in or around your area. If you are just one of the millions of individuals looking for a feel good title instead of a dog; enter the California pet shop lottery and take your chances.