I am no expert on dog breeds or their country of origin but my military training on spotting the enemy has me concerned over China’s infiltration of our colleges!

I just read a post my daughter sent about a particularly sick act of animal cruelty. It left me wondering what is going on with kids today. While some students have a goldfish… that is about it for their interest in pets or animal husbandry. According to my kid “pets are passé” but what bothered me most was what and how our kids are being taught.

Deciding to get a cup of coffee and change my thought pattern I headed for the kitchen. Absently stirring “black no sugar” I heard something on TV that got my attention. Went back in the living room, ran Newsmax back to make sure I hadn’t misunderstood.

Gordon Chang proudly reported on May 19, 2020 that China has many professors employed in our institutions of higher learning. I don’t know if it is covered on Fox or CNN but I’ll do some research on just how deep is the infiltration of China into our society. We know about the Wuhan flu politely re-named COVID-19 by the media. What we do not know is whether the virus got loose by accident...

We also do not know the width and depth of China's effect on our society today. I’m guessing, as “Confucius smart” as they are, their ability to interfere with our learning and political process is monumental. Sipping coffee I queried my device. Went to the non-public net I still access.

Here’s the deal. China doesn’t want to destroy us. As a rancher friend of mine observed a few days ago, “that would be like killing the cow instead of milking her.” He’s retired now but he was a highly respected counter-intelligence officer. I’ll talk to him later today but I can tell you that this has been going on for several years.

Think about it. What better place to propagate politics or change “collective” young minds than in the class room?

I took a little side-trip on the military web and learned there have been over a dozen College professors arrested during the last year, accused of secretly working with the Chinese government to “disseminate and propagate information.”

Hundreds of thousands of dollars “have been exchanged” and one source reported that’s the going rate to turn one professor at a time. Many of these college teachers also have generous “research grants provided by the United States of America.”

But that’s not all. According to the National Report there are dozens of Confucius Institutes operating in colleges around the country. Several of these have been shut down in the past year but there are still elaborately impressive buildings (provided by the Chinese government) on college campuses. 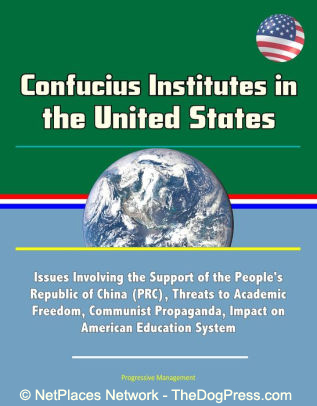 Before you ask, I looked it up. Military sources you can’t access pretty much agree with Quora which says “The average IQ of Caucasians is 100, while for the Chinese it's 105.”

If you are tuned in to the struggle between countries, you get that Supremacy is the goal. When humans first stood upright we had small brains but some guys caught on that 2 brains were better than 1 when it came to finding meat. As we became more civilized 2-man teams became a pack and we had to split the catch so that is when the practice of politics was launched.

So I get it. Today’s dog owners are rhapsodized by Chinese breeds some of which never originated in China at all but it sounded so intriguing and so deliciously glamorous that American-invented dogs acquired Chinese names in an elaborate Chinese origination story.

When the Chinese Shar Pei was first discovered and propagated in the United States it was exciting to all dog owners and particularly those who were involved in or fancied the rare breeds. So I get it, dog people love the “oriental breeds” but I think we need to separate dogs from politics and pay attention to our teaching institutions because they are not all about “higher learning” but they are experts at brain washing.