I have been an animal lover my whole life. As a child, I brought home strays, fixed their wounds and loved them until my dad took them to the Dumb Friends League. Cats, guinea pigs, hamsters, gerbils and rabbits. If my mom could handle it, I could have it! I had several dogs growing up and "adopted" neighborhood dogs as my own.

I always wanted to be a Veterinarian, but settled for Vet Tech school in my mid 20's. Only out of school two years, I was recruited by the University of Colorado Medical Center to be a research technician in the department of Cardiology.

I taught anatomy and some physiology to medical students, but my main job was to assist cardiology Fellows in their research projects. I worked at this very demanding and exciting job for ten years, always challenging myself to learn more. I became an accomplished surgeon, performing and teaching intricate procedures on the heart.

In 1990, while visiting friends in Hawaii, I came down with some dizziness. By the time we returned home, I had other symptoms, couldn't walk, talk or understand what was going on around me. I was diagnosed with Multiple Sclerosis at the age of 36. I had to take disability retirement.

During all the MRI's, spinal tests, blood work, CAT scans, you name it, all I thought about were my dogs. Could I still feed them, show them, teach them? I had just won a Group 2 on my Mastiff, Rebel. He was out of my first litter and my first show dog, Fannie. I had been active in obedience and had put a CD on my Doberman, a CDX on my Lab and CD's on two Mastiffs (quite humbling after the high scoring legs of the Dobe and Lab!). Rebel and another mastiff, Killian, were both ready to start competing for their CD's. Things looked pretty grim.

Finally, I was at home, in bed. For the first time in my life, I didn't have a job, I had no self worth. I never asked "why me?" I just forced myself to get up out of bed and fumble my way downstairs to take care of my dogs. It would be a year or more before I could safely go out and care for my horses, goats and pet pigs. But, I did my dogs......cleaning, grinding nails, feeding and letting them out. It wasn't pretty.

I just kept thinking, what CAN I do? What did I have to offer? Well, I had my dogs so, although I had to rely on others to drive me, I volunteered at Lutheran Hospital's pet therapy program. I had two Mastiffs in the program and soon, my Border terrier. It was so fulfilling. If you look, there are always others worse off than you are. We visited the hospice unit as often as I could. Then, they changed their program and I would have to commit to a monthly schedule. With Multiple Sclerosis (MS), you don't know from day to day (or hour to hour) how you feel. I couldn't make a commitment and not keep it, so I had to stop the pet therapy. 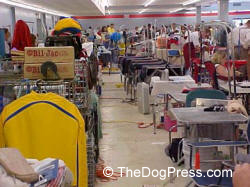 As I adjusted to my symptoms and others receded, I was able to drive again. Back to the dog shows! They were the best therapy for ME. I might use a cane to get to the ring, but by some miraculous reason, I could fly around the ring with my dogs!! I bred another litter and finished more Mastiffs.

Getting CD's was tricky. I couldn't walk a straight line, so my dogs looked bad. One obedience judge made a snide remark that if I could practice MY walking, maybe my dogs could learn to heal. I didn't say a word back, I finished three more CD's on my Mastiffs instead!!

Rebel, my pride and joy, won more Group placements, owner handled! One day, after winning BOB with Rebel, I wasn’t able to go into Group. This was unacceptable, said my friend, Ted Browning, a professional handler. He took Rebel in for me and won the Group!! I began traveling with Ted and his wife and handled for them for a few years. I would be exhausted and could hardly walk, but somehow, I could go into the show ring with a dog and shine. It was like an adrenaline high. I can't explain it.

In 1994, my husband of 23 years announced that he wanted a divorce. He said that I might have to have MS, but he didn't. After a very nasty divorce and thousands of dollars paid to my attorney, I walked away with my dogs, my horse, my goats, the bus for the dogs and my van. The dogs were the main thing I needed and thank God the judge was able to see that.

I had to move, of course. After losing my health, job, husband and house, I was lost. I was 40 now and had Multiple Sclerosis and all these dogs. Who would want me? I was lucky enough to find a person to take us all in. Audrey raised racing greyhounds and had the room.

I hated my new situation. I lived in an 8X10 ft room in an old double wide trailer. OK for me, but until I could build a kennel for my dogs, they had to stay in the bus in Vari-kennels. All of us were displaced. Two of the dogs got into a fight with me in the middle. My knee was badly bit. I had to go to the emergency room. I knew I needed to make things work better. I had a 24 X 14 ft wooden shed built, professionally insulated, wired and dry walled. I had an air conditioner installed, found a part-time job and tried to get on with my life.

In September 1998 while I was at work, the air conditioner stopped working. All eight of my Mastiffs were killed.

I was left with nothing but an $8000 veterinary bill for the one dog that held on for three more days. My grief was overwhelming. The dog community comforted me, someone suggested I contact TAKE THE LEAD.

I talked to Dorothy Collier and all my fears were over. Take The Lead would pay my bill and I could start over. I moved from the horrible conditions I had tolerated in the past two years. I also met a wonderful man, Jim, whom I live with now. He had never had dogs, so he had quite a surprise coming.

I got another Mastiff from my friend who had bred into my lines. She was Rebel's granddaughter, Spirit, and I finished her for her breeder. I only wanted another Mastiff to lay on my feet, to just “be” so I never specialed Spirit. I bred her and got a beautiful litter of nine, kept a male. Six of the nine puppies finished their championships.

By now, my old Border terrier was faltering. I did my research and imported a bitch from New Zealand. She had the "old time" look, perfect otter head and that proper border coat so hard to find nowadays. So I bred a litter of Borders, kept a beautiful male who finished quickly. His sister went to the stud dog owner and finished as well.

Last April I found myself asking again, what can I do? I had been so successful in the breed ring and the whelping box. I had bred just six litters of mastiffs which produced 17 champions, also finished a Bullmastiff and a Pointer. I was a natural at dog anatomy, movement and just basic structure. I could detect a limp and tell which joint was affected in an instant. All of this was second nature to me. 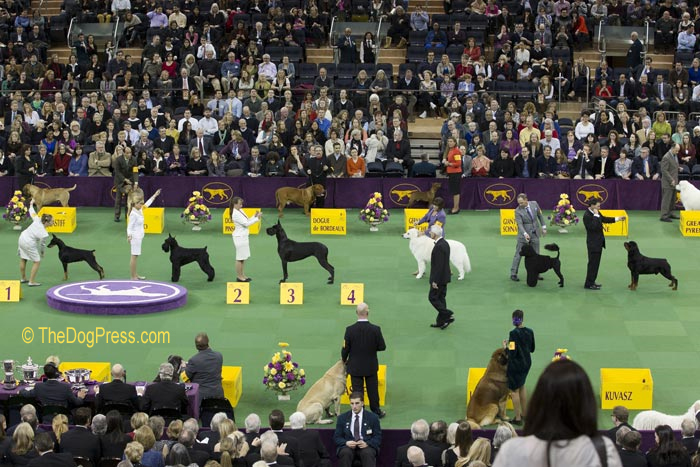 A judge, I thought, I could be a judge. Why not? I'm fair, honest, ethical and have great knowledge of the dog. I couldn't learn a new profession so why not develop what I already knew? A dog is a dog is a dog. Learning the differences in the breeds would be fun and something I could learn and build on. I obtained the information needed to apply for my judging license for Mastiffs, brushed up judging matches, best puppy, etc., turned in my application October 2007 and was accepted. I was published for my provisional in Mastiffs and Junior showmanship (all breeds) in February 2008.

My first assignment was a Regional Specialty in California at Del Valle, an entry of 67. What a way to start! Hired by my peers, I am also judging a Supported show in Alabama. I have my dogs, I have my self-worth, I have a job to do. Life is great.

Some have asked "what if you don't feel well", can you still judge? Well, I look at it like this: In all the years since my diagnosis of MS, I've traveled all over the country and to Canada and only missed two shows for being too sick to go. When I walk into a dog show, my heart starts pounding, my head clears. I can steward for six hours and not miss a beat. I think it's the whole atmosphere, the excitement in watching something that I know and understand. And, like medicine, my other love, you never stop learning.

Who knows what might happen? Yes, I could falter, but who doesn't? I could trip. I could get dizzy or fatigued. Or I could do just fine and do a good job. I can't wait to start this new road ahead. It's going to be expensive and exhausting. I only have a disability income but I can say this, I am going to be a good, well respected judge someday, and I have MS. MS does not have me.

Dogs ARE my life.