Little Bird heard there were $ thousands in fraudulent charges and that another top handler got suspended for screeching at a lady judge. 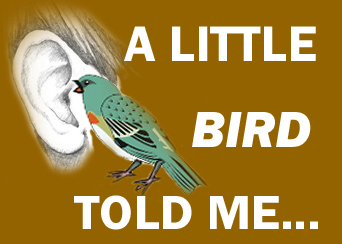 May 2009 - You people keep squawking about dog handlers but sometimes it is the handlers talking about clients.  I hear that owners own the dog, not the handler but one hawk said some owners expect to be called after every show to know if they won. Dove puffed up, she said handlers have a pretty tough schedule.  You know, handling so many dogs. By the end of a long day of grabbing dogs from an assistant or the groomer and running to yet another ring, they are just too tired to talk to owners.

We laughed and Hawk said "Handlers aren’t parrots! They don’t like to keep repeating why the dog didn’t win today.” Dove settled her feathers and said that some handlers only call when the dog has “done something” which I think means it won, not that it pooped on the carpet.

Parrot said clients who are paying top dollar and miss their dog have a right to call just to know that he’s eating and feeling okay even if he didn’t win. He said those owners won’t go out to dinner because “the handler might call.” They get all in a flutter even though the handler said not to expect a call until the circuit was over. It must be like sending your fledgling off to college. 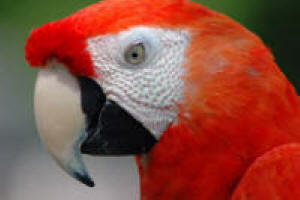 I heard one handler say that the only time owners don't want a call is when the handler won and wants a bonus. Makes me glad I’m just a bird!

So now people are chirping about this novice owner being taken for a lot of money in what many have said is outright fraud. The handler got seed money up front to pay handling fees, entry fees, travel expenses, and other out-of-pocket expenses but this guy got thousands of dollars and then the dog was hardly shown.

The owner finally managed to get him to ship the dog home but the poor thing was awful sick and had to go straight to the vet. I hear bad stories all the time. Someone new to the sport gets ripped off. The dog comes back from a "nobody handler" wrecked and the owner is disillusioned or worse. 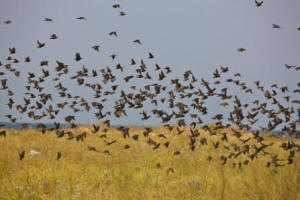 So I think I’ll light out for California and see if I can get a good news story. I’ll hang out a while because people are gathering up out there, like Purple Martins do before they migrate to South America. One of my buddies quipped that the people flock is big enough to scare off the buzzards that are always fluttering around things that smell rotten. I stay as far away from carrion-eaters as I can.  I’m learning that some people just can’t resist rotten meat and dirty deals.

I know how the air currents go so I’ll be back in a couple of weeks with more news. I'm hearing whispers about a young handler who is in trouble because he doesn't have his dad's skill or coolness. Can't verify it yet but someone said his case was in that magazine called the Gazette. The problem is that I can't read! Oh well, I can fly.

Editor's Note: Several of the latest dog show topics involve the inequities within our sport.  In the The Purloined Poodle, The Big Bad Wolf, and The Martin case we learned that favored handlers seem to get a pass from AKC. Recently Andrew Green is alleged to have cursed a judge and received 30 day suspension whereas a popular judge got 365 days for expressing her opinion. Hawk is chirping about an owner bringing charges against Eric Salas who got $6,000 to finish a dog but he didn't complete the contract?  You can get all the INSIDER DETAILS on Green & Salas problems if you've got your INSIDER key...