IF DOGS HAD WINGS... FLYING WITH YOUR DOG

Professional dog handler gives an amusing but enlightening account of how to miss your flight, find your dog, handle airlines, gate and freight agents. 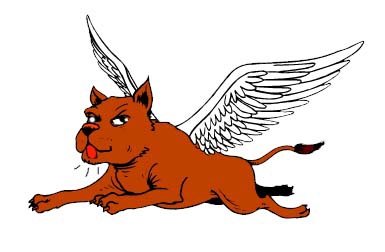 They say getting there is half the fun.

What do “they” know anyway?

We start our story four months prior when a decision was made to enter this faraway show. After a non-productive discussion with reservation agents who had no idea what a “500 crate” was, I decided to try to simplify the situation by speaking with a reservation agent and the pet flight booking department at the same time. Agents firmly in each ear, ninety minutes later I had flights that I was assured would accommodate the dog.

Arriving at the airport at the undogly hour of 4 am (additional check in time was strongly recommended for flying with a companion animal), I was heartened to meet a friendly ground crew who was pleased to meet my Akita, and even let me walk him back into the baggage area personally and say goodbye. Landing, though, from the first segment of our trip, proved much more daunting. After disembarking I learned that my connecting flight had been cancelled. No big deal, or so I thought. 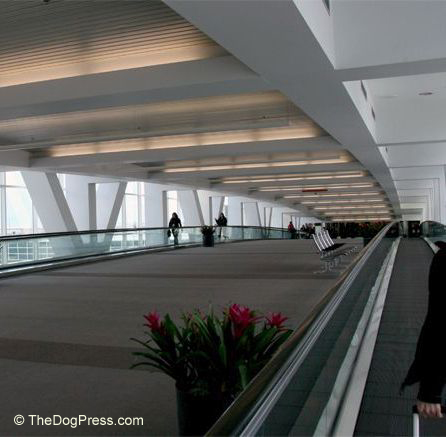 Until I was made to walk more than a half mile to the previously scheduled departure gate. Once there, the agent at the desk simply sent me to a service center for more information. Trudge, trudge down the hectic hallways to the hallowed grounds of the service center - where I was given only a new ‘interrupted travel” ticket for a flight two and a half hours later. Politely I inquired where I could find my dog during this delay. My only answer was to find my new gate- more than half a mile back in the original concourse.

Trudge, trudge, trudge back again, and to a new agent who needed all the information once more. When I asked where I could find my dog, I was informed that “I’m sure he’s fine. All baggage from the canceled flight will be placed in a separate room, its warm”. Interesting. How, I asked, was a piece of baggage such as an Akita to find something to eat, something to drink or even how to find the nearest little baggage’s room?

Blank looks are not an answer.

My first flight segment arrived at 2:20 pm. The second segment was cancelled by 2:30 pm. At 3:00 pm, I am at the new gate with no dog, and now have learned that the original reservation agent had marked the companion dog as accompanying my ticket. I couldn’t continue on to my destination on specific aircraft, which now bumped me back to a 7:40 flight.

Ah, but do we remember the dog, the patient puppy waiting in a 28”x 24”x 41” space with no food and no water? I asked the desk agent again where my dog was and as it turned out, he really didn’t know. At my request a supervisor came to the gate, making more than two dozens calls between 3:30 and 5:00 attempting to locate my dog. Increasingly I became a wee bit more agitated - Akita owners are not renowned for their patience or forgiving demeanor. I asked, “Do you or do you not know where my dog is?"

Finally at 5:15 pm, after a threat to contact the Atlanta Police for grand theft of a show animal, the dog was miraculously located. I followed said supervisor down a boarding ramp and through a side door, down metal steps right down onto the tarmac itself!

Living in the bay area acclimates you to some different weather but you don’t expect to meet it head on without a jacket, gloves, or any protective clothing. Said supervisor walked around a bit looking lost, trying to locate the dog. Asking for directions from ground crew, we were directed to a baggage cart, three feet off the ground, with rails, where my dog’s crate sat alone. 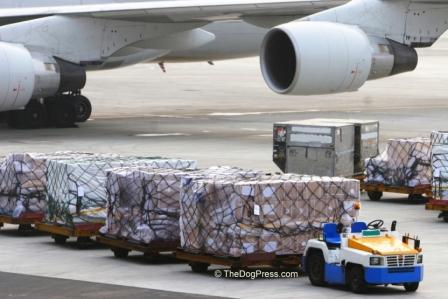 On the tarmac with three jets worth of screaming engines surrounding us, in the freezing rain and disgusting burning fuel fumes, No One would come forward to remove the rails from the cart, but ah, being tall can sometimes be a blessing. I was able to lift the dog up and over the rails and onto the ground. He greedily consumed the airport food court cheeseburgers I’d bought for him and drank the water offered. The supervisor would not allow me to walk him anywhere (he’s already had one accident in the crate, oh joy) since we were actually down with the running jets and there’s this whole ‘national security’ issue. What matters that to a rather upset dogmom?

With sadistic pleasure I allowed him to leave a little pee-mail on their building and cart. A kindly ground crew member (mister- I never did get your name but Thank You) brought me paper towels to clean the crate and my dog’s feet, even helping to do some of that cleaning himself. After a short (and cold!) visit I crated the dog back up and climbed the ramp’s steps back to my boarding area.

Closure? Never heard the word. Turns out that asleep at the wheel reservation agent didn’t bother to properly book me after all for my return flights either. 45 minutes and twenty wishes for a nice cold drink with a little umbrella in it, the return flights were resolved. Or were they?

Here I sit at my trusty laptop, sharing this cautionary tale with you, while I wait through two more delays  One more and I’m going to have to put on my AlphaBitch cape and tights (again) and make them allow me to check on my dog. Seven-forty has come and gone. I won’t arrive at my destination now till tomorrow, officially.

It’s not my first time to the dance. I’ve flown successfully with companion animals on cross country flights numerous times. I’ve never seen the level of ignorance and disregard for those animals’ well being though as I saw demonstrated today.

We’re coming up on the busiest season for show dog travel- Westminster. I must wonder how many exhibitors are flying with this Loose The Animals airline.

Book an extra day. Book two. Or better yet, hit ‘em where it counts and change those reservations to alternate carriers.

Post script:  After the show, I not only learned that this same airline had just completely lost a Cane Corso pup shipped by his breeder to a buyer in another state, but the also made a mess of my return flights. The first leg of the trip (again through Atlanta, angels and ministers of grace, defend us!) was already booked for 6 dogs traveling with a professional handler, and the loading door wasn’t equipped to handle my crate. All told, three hours to settle the matter and I almost missed my flight. To that poor Corso breeder and the pup’s heartbroken owner, my sincerest sympathies. As far as this airline is concerned,  D-on’t E-ven L-eave T-he A-irport!!