THE STORY OF APHRODITE

Two years of unrelenting search and belief that her heart-dog was still alive led to the rescue, arrest and prosecution, a lesson for dog breeders and justice for those who have no voice!

click to jump to January 2014 Update: Marsha Shively or read the story first.

In mid-December 2010, I transported Toy Fox Terrier “AKC-UKC CH Shively's VIP the Mighty Aphrodite” to Fort Wayne, Indiana to be bred to a male owned by Marsha Shively.  Due to Marsha's greater experience we agreed that she would whelp Aphrodite's litter. I returned home to Pennsylvania little knowing that day in December was the last time I would see my girl for nearly two years.

Over the next six months, I exhausted every way to reach Marsha. Finally, in early June, Marsha answered her phone, denied getting messages and when I asked her how my girl Dite was, “She's dead,” was the response. Just like that.

What happened? How did she die? Did any pups live? Why didn't you contact me?” Marsha maintained she had tried to contact me, continued to insist my dog was dead and there were no pups. I didn't believe her. I just couldn't believe my little girl was gone. Little did I know how “gone” she was. In July 2011, I attended a judge's seminar in Kalamazoo, Michigan and from there headed south to Fort Wayne to pay a surprise visit to Marsha. The closer to Fort Wayne I got, the angrier I became. I decided it might be a good idea if the police went with me. Taking the police turned out to be one of my better ideas.

The police officer met me at Marsha Shively's home.

He knocked on the door and when she came to the door he explained that, “Mrs. Sklar has come for her dog.” She responded that the dog was dead. “What veterinarian handled the death?” he asked. She became evasive, said that she had buried her. “Where did you bury her?” Her response was that she had thrown Aphrodite out in the trash. “Now I know that you're lying to me,” said the officer.

Marsha invited us into the house to see for ourselves that Aphrodite was not there.

Layers of dog feces covered the floors. Dog urine soiled the furniture and walls and gave off a strong, foul odor that added to the general disarray of the home. While we were in the house I observed puppies playing. Two of them were small and looked very much like Aphrodite, and also looked to be about five months old.

While the officer spoke with Marsha, I took advantage of her “look for yourself” offer. After the officer and I left the house he asked me if I was satisfied that the dog was gone. I responded that I was not; Aphrodite's crate was not in the house, and a dog person would not throw out a perfectly good crate just because the dog had died. I believed that Aphrodite had been moved from Marsha's house while in her crate and that my dog was NOT dead. I also informed him that I could identify her crate; it was pink, had my name on it in black marker, airline stickers, etc.

The officer, very disturbed by the condition of the home, called the Fort Wayne Humane Society and the Department of Public Health. He gave me a card with the assigned case number and I left for home.

Working with the Director of the Fort Wayne Humane Society, I discovered that their interaction with Marsha went back at least ten years. She had been cited on numerous occasions for violations of the city's dog codes. Additionally, there were records for the dispersal of all of dogs that the Humane Society had required that she dispose of. Using these records, I began to investigate which dogs may have been my lost dog and where and to whom those dogs may have been sent. I contacted each possible recipient, deleting them from my list as I went through it. Humane Societies from numerous cities assisted in the search for my lost dog, verifying the microchip numbers of every possible candidate.

The American Kennel Club responded that if I wished to challenge the authenticity of the registration, I would have to post a $500 fee which would simply allow for their representatives to decide whether or not to hear the matter. I would lose the fee if they decided not to hear the case.

I never get too old to learn something new.

It was now the end of June, 2012. I had tracked by lost dog across the country through five states. I was so discouraged. I had one last location to check in Ohio but was having difficulty clarifying the spelling of the individual's name. I worked on this puzzle for several months. Then, the call I had been waiting for over a year and a half.

On October 3, 2012 the Columbus Ohio Dog Shelter confirmed THEY HAD APHRODITE.  She was blind and not in great shape. 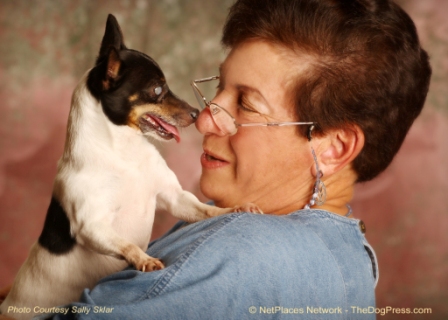 Someone had dumped her in their drop-box but because she was micro-chipped, they kept her for more than a week and finally, rather than having the little dog destroyed, released her to a rescue group in Columbus. The shelter would not release the rescue organization's name to me until they received a “Freedom of Information” request in writing.  I faxed the signed form to them and that same afternoon I was speaking to the head of the rescue; she had my long lost dog Aphrodite sitting on the sofa with her that very moment. We made the necessary arrangements, and the next morning, October 12, 2012, I headed to Columbus, Ohio to get my now-blind little dog.

Would she know me after 2 years? When I arrived that afternoon at Peace Rescue, Dite's head swiveled when she heard my voice and when she finally smelled me, she began to scream. I cried with her. We went home together.

October 12, 2012, I contacted the Fort Wayne, IN police department, gave them the case number, and told them I had recovered my stolen dog. I was put in contact with the detective with whom I had previously worked with. “I have proven that the woman, Marsha Shively, lied to the police officer during the investigation of July 31, 2011. I have recovered a supposedly deceased animal. I wish to press charges against her.”

The detective's reply was, “It's just a dog” but finally, the detective began to appreciate my point of view. Rather than thinking of this as a civil matter, he began to analyze it as criminal. The prosecutor issued a warrant to have Marsha Shively voluntarily come in to speak to the detective who had now been assigned the case.

Marsha Shively continued to maintain that Aphrodite was dead until the detective informed her that the dog was indeed alive, and back in the possession of Mrs. Sklar. She admitted, finally, that she had taken the dog and given her to someone else. “Who?” is still a mystery.

Marsha Shively was arrested June 25, 2013 by Fort Wayne, IN police, finally charged under Indiana law with “Criminal Conversion Class A Misdemeanor” for the theft of Aphrodite. She requested a court appointed attorney. I wish that there was some way to keep it a felony but then the case could have been simply thrown out, as it was “just a dog.” First hearing was August 9, 2013.

Sally Sklar agreed to provide a copy of her Letter To The Prosecutor as example of one of many ways dog owners can push a lazy or indifferent justice system to act.  The state brought Case # 02D04-1211-CM-006256 State of Indiana vs. Marsha L. Shively to court on August 9, 2013. Again, it was “just a dog” but I persisted with this Letter To The Magistrate. Take a minute and read what happened and how the justice system can be manipulated by a MENSA member who is used to using people...

January 2014 Update: After twice failing to appear for court hearings, Marsha has been arrested and jailed for contempt of court.  According to the Prosecutor handling her case, the court will no longer allow her to be bonded out and she must remain in jail until her next hearing date of January 24, 2014. Since she fired her attorney a new one was appointed (these are court appointed public defenders) for her and should be appearing with her at that time.  On that date she must either plead guilty, or ask that a trial date be set.  According to the Prosecutor she-considering her contempt of court citation-would now be held in jail until and during any trial.

It is interesting to note that this Prosecutor originally told me that knowing the laws violated she would never serve ANY time in jail, and that would be to my benefit(?) as if she did, the maximum would be 365 days, and I would not be able to recover financial damages.  Although I had never even considered financial recompense as an option, or desirable, there it was, and there SHE was, in jail serving time-all her own doing.  The Prosecution will NOT accept any plea bargain at any time, so she has incarcerated herself until whenever.