Mary Wild slept in air-conditioned comfort as temperatures in her closed van soared to over 120 degrees, causing the excruciating death of 7 helpless show dogs. 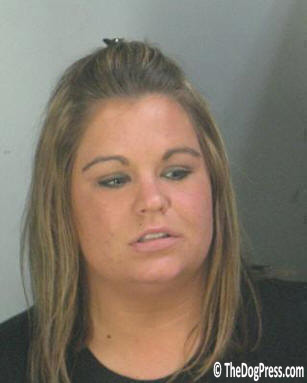 Mary Wild stopped to party after the show, leaving her van parked so it was exposed to the morning sun.  The 24 year old Missouri dog handler faces up to 8 years in prison.  Facts of the case, charges, AKC's statement, interview with the Jefferson County Prosecutor, conviction and sentencing updates are compiled in one of the most talked-about handler cruelty cases in recent years.

We would like to thank the Detective Division for providing Mary Wild's booking photo.  Capt. Brown has ten working police dogs under his command.  Each dog lives with his handler and wears a bullet-proof vest with a badge when on duty.

Skip to Mary Wild Sentenced Today (below) or continue to get the background before you mull over these details and the sentence handed down.

Mr. Wegge clearly understands the concerns dog people have over this case.  He said his office has been “deluged with email, many of them with questions that can not yet be answered.”

Asked whether the bond was $2500 as we were told, and if so, had Mary posted bond and been released, he replied “Yes to both questions.  Arraignment is August 12th.”

I explained that there is speculation as to how seriously this case will be regarded.  Without hesitation, Mr. Wegge said “She has been charged with eight individual counts of animal abuse.  Each is a Class A misdemeanor punishable by up to 1 year in jail, a $1,000 fine, or both.”

The Prosecutor responded to this blunt question: “Yes.  After reviewing evidence appropriate to the case, we filed 8 separate counts of animal abuse.  She hasn’t entered a plea yet.  She will do so August 12th.  The case could be decided by a judge or by jury trial but the judge will impose sentence based on the evidence.”

Could this have been a felony count in Missouri?  "We have two state statutes to deal with.  Neglect is a Class B misdemeanor for the first conviction.  Neglect carries up to 6 months and/or a $500 fine.  Animal abuse is a Class A misdemeanor punishable by up to 1 year and a $1,000 fine.  Felony charges could apply if this were a second Abuse Offense or if there was evidence of deliberate torture and an elevated Class D felony conviction carries up to 4 years in prison and a $5,000 fine.”

You mentioned a flood of emails.  Have you to talked to dog experts or professional handlers to obtain evidence? “The law is specific as to what can and cannot be presented in a criminal case as compared to Civil law.  We have to prove specific evidence to support the charges and it is a high burden of proof; therefore only directly related evidence can be considered.  That does not include opinion on whether a defendant is a “good” or “bad” person as might be heard in civil court.”

We thank Jefferson County Prosecutor Forrest Wegge for responding to TheDogPress questions.  His office is taking the Mary Wild case very seriously.  The evidence was compelling, thus the 8 individual charges.  As Mr. Wegge pointed out, it is the judge who will impose sentence.

Wild was charged with knowingly failing to provide adequate care for a top winning Akita bitch, a Dalmatian believed to belong to her assistant, three Golden Retrievers, two Siberian Huskies, and one Malamute.  The Malamute may have belonged to Mary's mother or been one of her breeding.  There were witnesses but we are withholding their names.

The evidence is clear, no question as to responsibility and neglect, so we sought to confirm whether or not Mary Wild is suspended pending outcome of the case. We reached Jack Norton, Director Of Compliance for the American Kennel Club but he said we would need to contact their Communications Department for press releases.  I explained that we didn't need a press release, it was one answer to a policy question and he is after all, the Director.  He was most congenial but again referred me to Communications.

I left two messages for Daisy Okas and an hour later, she called back to inform my secretary that she had just emailed me the press release.  Ms. Okas assured us that her press release dealt specifically with my question.  Click to read ii for American Kennel Club Press Release.  We assume the release was hastily prepared in response to my phone call because we could find no press release on the AKC website, and specifically, nothing in the press section.

As you will learn "put on referral" does not mean Mary Wild was suspended or in any way prevented from handling or putting other dogs at risk.

09|30|09 Mary Wild received a continuance until October 13th in criminal court.  The request for change of venue was dropped but she will be tried by jury on 8 counts of animal abuse and even though the local publicity has died down, our guess is that Forrest Wegge, Jefferson County’s Prosecuting Attorney, will make sure jury members fully recall the horror Mary Wild created.

11|02|09 Mary Wild received yet another continuance until November 24th.  One reader sums it up "given the proximity to Thanksgiving her case could be rescheduled further out – this could go beyond December. What a disappointment – the longer this drags out, the less likely that she will be punished as she deserves."

A dog-attorney with whom we consulted observed that may be precisely what her attorney' is working to achieve.  By winter time, jurists will not be as conscious of the extreme heat in which the dogs suffered prior to an excruciating death.  Smart move for her legal team and as our attorney pointed out, the longer a case drags out, the less important it becomes on a local level.

In the meantime, Mary Wild's sister is showing dogs down south.  Her mother is a strong figure in dogs and of course, working to defend her daughter.

The story is NOT being followed by Missouri news media and efforts to petition the newspaper with Letters To The Editor have been blocked. When I spoke with Carolyn Marty of the Post Dispatch, she was curt but definitive "No, we are not covering that story at all."   As a reporter, I find it inconceivable that a major, local, human interest story isn't being followed.  Perhaps she just doesn't like dogs, perhaps she has been persuaded by Mary Wild's defense council, or does she suggest that people in Missouri (a puppy-mill state) are immune to stories of dog abuse?

We are told the Malamute Club forbid any mention of her name on the breed list.  The club has not expelled her.  Several readers have opined that some (club) people seem to be covering up for her, using ii AKC's Club Suspension Policy as an excuse.

12|01|09 Mary Wild was rumored to be entered in Illinois shows.  The rumor was true.

Mary Wild's Probation Revoked but the judge is sooo lenient...  As of mid-June 2018 Mary Wild does not appear to be listed as an exhibitor, agent, or dog handler.  If anyone has information to the contrary, please email the editor.