Of Dogs and War 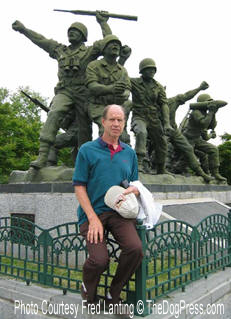 Except for the minority of canines which are employed in military or police work, dogs in America are generally thought of as everyday companions and children’s playmates.

North Korea is in the news today but this photo was taken on a judging trip when I stopped at Korea’s DMZ between dog shows.

Around the world, most people associate dogs with peaceful pursuits or pleasurable pastimes and in my judging trips, that was comforting and in many countries, reassuring.

Lack of exposure tends toward provincial prejudice. Most people, regardless of where they live, do not travel widely, but get their views of the world through visitors or electronic communications. As a species, we are not much different in that respect from other animals. Even in migration, animals usually prefer to group with others in the same family.

But where necessities exist and are shared in common, then tolerance, understanding, and cooperation tend to break down or in the case of animals, prevent prejudices. I think of the great mixed migrations in central Africa, where zebras, wildebeests, antelopes and other species mingle in their search for water en route, even to the extent of drinking from the same waterholes as do lions, jackals, and hyenas.

We may be approaching a similar time in geo-politics and world order.

Because of my book on canine orthopedics disorders and my all-breed handling and judging experience, I have been privileged to lecture and judge dog shows in many more parts of the world—to date, more than 30 countries. Exposure to different cultures increases understanding and tends toward peaceful relationships, respect, and even friendship.

As an extreme example, a very close friend who bred GSDs and was the head of a guide-dog school in California had been a German submarine commander during the war in the 1940s in which Nazis killed some of my non-combative relatives in Holland. Wouldn’t it be great if political leaders were to share interests such as happens in the world of dog shows! 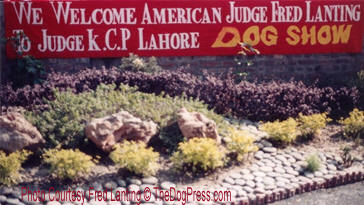 Of course, there will always be “non-doggie types” who absolutely will not learn, and will not desert their extreme positions for the sake of understanding and personal peace.  I have no illusions that I would ever be invited to judge dog shows or to lecture in areas dominated by radicals who hate everyone outside their own sect.  Places such as Gaza/Palestine, Iran, Iraq, Sudan, and such are examples; they just don’t have dog shows.

However, societies that are somewhat more tolerant and open, while they might not be considered as free and safe as more culturally diverse or civilized countries, do have dog shows. Take Pakistan, for example, where I have judged a number of times. This banner is how they welcomed me.

Here is a country that is about 97% Muslim and 1% nominally or actively Christian. There, I have seen very large crowds of spectators and huge competitor entries. 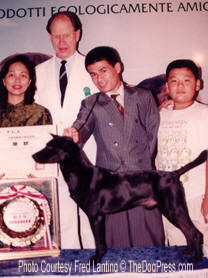 Compare that to dog shows in the U.S. where spectators are few and where specialty shows have abysmally few entries; or the U.K. where participation—at least at specialties—is pitifully small.

This paradox was also apparent to me when I “did my dog thing” in Malaysia and Indonesia, where Islam is officially the religion of some 70-90% of the people.

Yet, many in Europe and the Americas who have not traveled much or far and whose view has not been thus broadened, have consequently painted all inhabitants of such countries with the same brush. 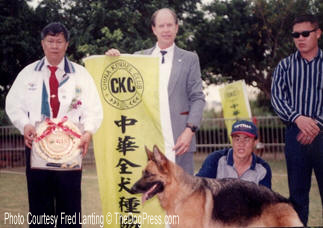 I have judged (in Pakistan, years ago) where explosives were blowing up sidewalks and storefronts a few blocks away, and in India when war was on a razor’s edge.

It so happened I was in China and Taiwan when conflict was equally imminent. And in Colombia when FARC (Fuerzas Armadas Revolucionarias de Colombia) posed a real danger and necessitated a military escort to get me to show, consulting, and lecture locations.

Yet, in all such venues, I enjoyed the camaraderie of fellow dog enthusiasts who love peace as much as I or anyone does. I’ve often joked that if we required all politicians and military—especially those in other countries—to own, train, and show dogs, we would have a hiatus on war.