Dogs have a right not to be born handicapped. Some breeds have become canine caricatures, giving the Animal Rights whackos credibility.

Watching TV with my kid, I made that astute observation. that compels someone half my age to educate her elder. She lost the war of words but it probably was the worst bloodless battle I ever won. I’m not proud of it either because I respect her passion for what she believes in.

So I put off writing this, hearing “Daddy, you can’t say those dogs are ugly, I’ll never be able to go to another show!” Then I remembered that with the new job, she isn’t showing anyway and what the hell, someone has to say it. I don’t think that Pacelle guy she was shrieking about reads The Dog Press but I’m banking on some level heads out there in “the dog fancy” so here goes. 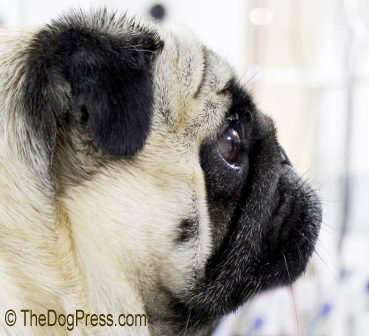 What moral justification gives humans the right to torture dogs in a life of suffering? Why do otherwise decent people condone it? For over a century now, inhumane humans have bred dogs incapable of living without human support.

In the quest for something "special" or “unique” breeders have caused dogs to be born, which under most other circumstances, would be humanely destroyed.

One of the worst dog deformities is the inability to breathe. No dog's nose belongs between his eyes. Only an egotistical misfit lacking the human capacity to love would do that to a dog! How horrible to be sentenced to a life of struggling for enough oxygen to sustain life! I have a touch of COPD from exposure to toxic chemicals and this spring I suffered like a bulldog. It really made me think.

If you have any perspective, pun intended, you will admit that living with constant eye irritation, like something in your eye you can never get out, would be pure torture.  Dogs just keep smiling but that does not mean they “get used to it.”

I've had strong men with chronic pain say if it were not for hurting their family, they would check out. What do you say as your dog struggles to do your bidding although his twisted joints or deformed spine hurts so bad he would rather just lay perfectly still? My old hound looked at me with love, not condemnation, when I quit letting him run free in the woods because he always came back beat up.

Thinking back, I should have kept letting him be a DOG. Just because he forgave me and worked off his frustration chasing the cat doesn’t make it right.

Why do dog breeders rally to fight against Animal Rights, learn about ii Animal Rights Origin & History, instead of fighting for their animal’s right to be healthy? That’s like sending a platoon after one rice farmer instead of launching a division against the Viet Cong.

That stupid order made as much sense as dog breeders defending the breeds with the most genetic (man-made) health problems, 47 seriously painful problems according to some Swedish panel. I can see where those breeders would be in denial but they need to see a psychiatrist, not a dog show judge. 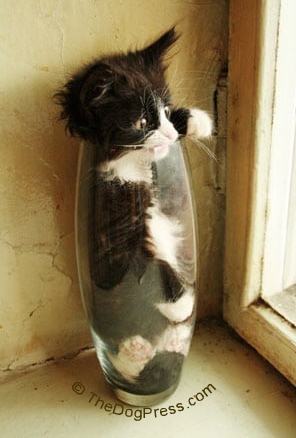 I don’t claim to be a dog expert but if I was a chow dog I’d want to see what might be coming at me from the side and to think that some Chinese emperor deliberately crippled those little Pekingese so they couldn’t wander off and do what dogs do is downright sick.

I guess Shar Pei breeders are working on the skin problems but I put the development of those dog breeds in the same category as sticking a tiny kitten in a bottle and letting it grow up in there to amuse a kid. Sorry, I know we’re beholden to the Chinese right now so maybe I should pick on the French.

You breeders wonder why you are easy targets? You can’t see the enemy forces just ahead as you clump and crash your way to professional suicide? If you loved your dogs as loyal companions instead of weird ornaments, you might just go to the pound and adopt a real dog instead of some creature with an exaggerated head that had to be conceived by artificial means and born by surgically cutting the mother dog open...

Isn't that a perfect picture for those Animal Rights extremists? It took a while, several cups of coffee to be precise, but my daughter finally agreed when I threatened to donate to one of those animal "rights" groups...