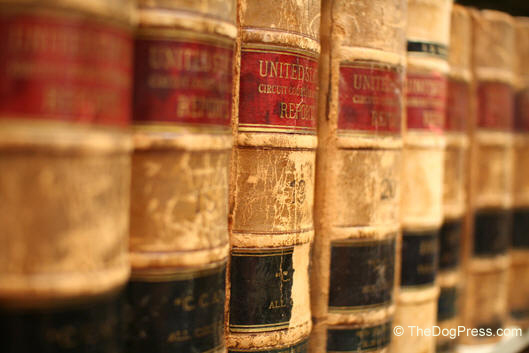 As there was some link between the property and the actual crime and a hearing was offered, the seizure was legal. The ships and cargo would then become the property of the government as retribution for the crimes done by their owners.

We most often see this process today in the seizure of vehicles used to transport drugs or real estate where illegal drugs are manufactured or sold. Some clever law enforcement agencies, looking for ways to supplement their budgets, have turned to seizure actions in criminal cases. The number and types of seizures of personal property in civil actions exploded during the nineties and continue today with few limitations. The person’s car, boat, airplane or home would be seized in a civil proceeding. Sometimes even property not owned by the person accused of committing the crime is seized if it was used in the commission of the crime.

Yes, grandma’s car would be seized by law enforcement because she loaned it to her grandson not knowing he would be delivering the pot to kids at a party. While there are some limited defenses to these seizure actions, it puts the burden and costs for seeking the return of property in those cases on the owner. A lot of people who lost their property in the war on drugs have gone unnoticed by the public and when it was make public, people just didn’t care. Generally there isn’t much sympathy for criminals when bad things happen to them. There wasn’t any public outrage and people felt insulated from the government's conduct because it would never happen to them. These types of seizure actions have been upheld time and time again by the Supreme Court.

Dog breeders and owners were pretty much insulated from this practice because, by and large, they are law abiding citizens and remained unaware of this conduct by the government in drug busts or, if they knew about it, didn’t think it would ever apply to them. That all changed when laws were enacted making generally accepted animal husbandry practices criminal. Most of these laws were supported and pushed through the legislative process by the well funded and very politically active extreme animal rights proponents.

We already knew that intentionally harming or physically abusing an animal was wrong and the laws in every state make that illegal, but now, neglect, which can mean very different things to different people, is criminally illegal. That is how an AKC judge/breeder can be accused of criminally neglecting or abusing his dogs because some of them may need a tooth cleaning or a couple of puppies have umbilical hernias. Whatever risk factor is present for any of these conditions, by the time it gets to court they will be magnified at a hearing for return of the animals by the humane officer or other expert the government official brings to testify against the owner.

The humane officer, with a zealot AR veterinarian, will equate a small unrepaired umbilical hernia on a young dog with beating the dog over the head with a club. And the courts, without anything in the record before them to support the owner's position and challenge the government's testimony or expert opinions, will be forced to rule in favor of the government.

Understanding Due Process May Save Your Dogs

It is incorrect to think the government can’t take your property. The Fifth Amendment often referred to as the Due Process Clause of the Constitution, is a guarantee of fairness in the state’s interaction with its people and that no individuals will be deprived of their life, liberty or property unreasonably or without due process. Compliance with due process means that the legislative process permits public input and the implementation of those laws permit an opportunity for the individual to be heard.

That initial hearing before a judge on the seizure of the animal IS THE GOVERNMENT’S COMPLIANCE WITH YOUR DUE PROCESS RIGHTS. Make that hearing count with a strong legal defense. Be prepared to support your position with facts, witnesses and hopefully a veterinary expert. Contact your support network and pull together as many people who can help you as possible. Don't try and do this alone

I am so often contacted after that first civil hearing by attorneys or their clients because they were blindsided by the opposition. They, like most normal people, look at the situation as absurd and walk into a hearing thinking no reasonable judge would keep the dogs from their owner, especially when they are healthy. They believe they will get the animals returned that day with some expectation that a few conditions in the home or kennel might need minor modifications, especially when it seems such a blatant overreach by the humane officers. They are shocked to find out how difficult this is and are unprepared for the war they need to wage at those initial steps.

The opposition is ready to conduct a well-orchestrated attack on breeders, even reputable show or hobby breeders. They know the raid will stress the animals enough that many of them will defecate in their pens or crates. Photos of dogs standing in their own urine and feces will be shown to the judge. They bring the most extreme experts to testify in support of their agenda, people who will tell the judge that failure to obtain regular routine dental cleaning is criminal animal neglect or abuse.

Many of these cases result in criminal charges that ultimately are dismissed or reduced when the government is forced to prove a criminal case against the owners. Exposed to the greater scrutiny of a criminal proceeding where a defendant has strong legal defense and liberty rights that government must protect, these cases often fall apart. That is little consolation when the seized dogs are gone.

A dismissed criminal charge or even an acquittal after trial doesn't negate the damage done to the owners from the civil case the owner lost in the seizure action. Seizure actions are won or lost in the first few days after the animals are seized. A successful case at those early stages will most likely serve to reduce the chances of future criminal charges. Most prosecuting attorneys will recognize that if the government can't win a civil case against an individual it would be close to impossible to win a criminal case where the burden of proof for a conviction is higher than it is for a civil judgment.

There is a very short window of opportunity to present an opposing view to the courts in dog seizure cases. Be prepared with your legal defense. It may be your one and only opportunity to save your dogs and ward off future criminal prosecution.