DO VACCINES CAUSE CANCER?

The medical media question is whether polio shots of the 50s and 60s and today’s over-vaccination trend account for soaring cancer rates in people and our pets?

Concerns are greater today due to more medical knowledge and by the vaccines being pushed on children and even us adults. My daughter called about the 2019 measles outbreak wondering whether to revaccinate her kids. I looked it up. CDC defines an “outbreak” as 3 or more cases but it all seemed a bit sensationalized.

As of May 2019, the Centers for Disease Control reported 839 cases of measles across 23 states. It is reported as originating in Oregon and Washington state. Both states welcome illegal immigrants and although I don’t get into immigration problems, I do believe people should be medically screened to protect those already here.

Her worry was the greatest number of measles cases since 2000 (when measles was declared eliminated in the U.S.) coincides with the huge amount of vaccines being pushed on adults as well as children. She wondered if I thought the “measles epidemic” was just a hoax since friends told her measles were eliminated years ago. I said I’d call her back.

Here is a summary of what I told her. It wasn’t hard to find. I started the conversation with an old adage “with benefits come risks.” She sighed… “Mom…”

Okay I’ll get to the point here too. The invention of the automobile has killed more people than any disease since the horse and buggy days but who would give up their car? The solution is to drive carefully and avoid dangerous road conditions. I told her the same is true with vaccines. We should proceed with caution and clarity, watching out for sharp curves when it comes to vaccines.

I admitted anyone under retirement age probably doesn’t remember that they once told us measles was eliminated in the U.S. I have to think it is back because of all the unvaccinated people coming in from other countries so it would be better to get her children re-vaccinated. 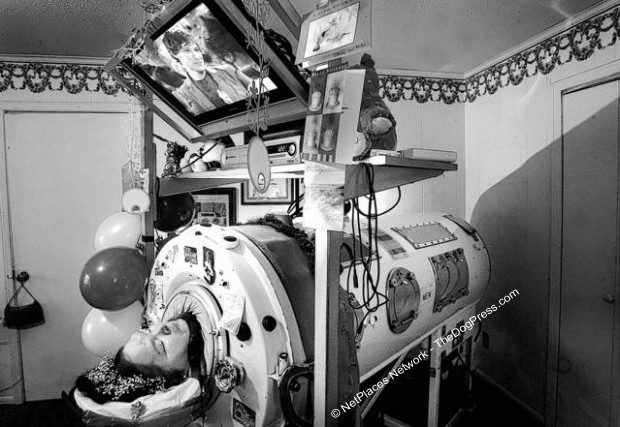 She stopped my dissertation, asking why they have to have polio shots when no one has ever heard of that? That took me back!! Way back… to the days of the mechanical respirator called the “iron lung” which breathed for polio victims. And suddenly, like a quote from a teacher of long ago, I remembered a connection between vaccines and polio. Told her I’d call her right back. Turned to my laptop…

I discovered an amazing connection between two doctors, Albert Sabin and Jonas Salk, both of whom invented polio vaccine. Salk invented the dead-virus vaccine and Sabin had a live-virus version. Anyway, the point is that the polio virus is still active in other parts of our world and so are other diseases considered eradicated in the U.S. We Americans got to this enviable health position through the widespread use of vaccines.

People of my daughter’s age don’t even remember the Iron Lung and the incredible suffering, physical sure, but the mental and emotional deprivation of living in an iron lung must have been unbearable. I think I would rather have just had a shot and never woken up. I didn’t go into any of that with my kid but for you seniors, just hold that thought…

Vaccines are life-saving but can also be health-compromising. As some Greek poet once said “moderation in all things” is best. That includes vaccines.