I received many messages from readers thanking me for bringing to light the issue of handler neglect or abuse and the problem with AKC ignoring it. 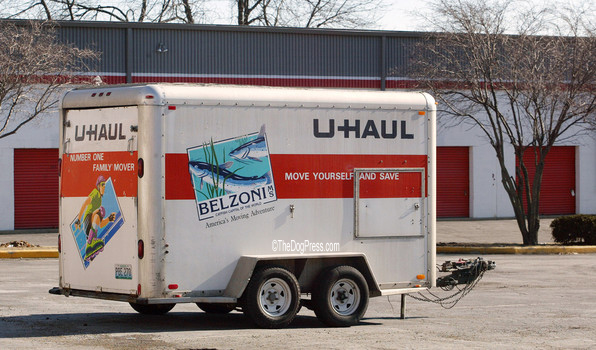 One very disillusioned reader sent pictures of several dogs being unloaded from a U HAUL TRAILER! These trailers have no ventilation nor do they have climate control. This reader rushed in and reported it to the AKC Rep- who once again DID NOTHING.

This was right after 19 dogs were found in a U-Haul trailer in Contra Costa County, CA in March. The Examiner.com said the trailer "lacked ventilation" and "reeked of urine and feces." Two of the dogs had to be euthanized but the others were treated and adopted out. The "transients", Jeong and Espinoza, were charged with animal cruelty.

I will give you all the same advice as I have offered those writing to me. Go to the AKC rep and the show committee to make a formal complaint. Let them know that if the person isn't reprimanded or brought before a bench committee, you will...

CONTACT THE LOCAL ANIMAL SHELTER ABOUT THE ABUSE, AND FILE A SHERIFFS DEPARTMENT COMPLAINT (MORE CLOUT THAN LOCAL POLICE)

Sooner or later, a dog show attendee is going to call the TV, radio, or newspaper to come and cover badly neglected dogs.

AKC does not want negative press. They depend on good feelings from all of us. Even if they do continue to register puppy mill puppies, the American Kennel Club does not allow abuse and has a duty to protect dogs, and their own good name.

We also vote with our feet. Go to other venues. UKC is gaining in popularity. Their Judges are trained to judge by the Breed Standard, not according to Handler Recognition. United Kennel Club shows are more relaxed and people are very friendly. If the money is not coming in, AKC will have to take note.

I also received a letter from the Steele's lawyer asking me to stop writing about them. I don't think she understood or she didn't read my article. My point was that if the Breed Club bans someone for abuse, the AKC should follow suit. I was not pointing fingers at any one person.

I am trying to call attention to the ugly side of dog shows that needs to stop. If you, as an owner, do not keep track of how your dog is treated on the road, it falls on you when something happens to your dog. 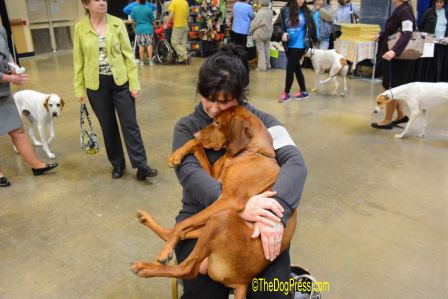 My suggestion is quit worrying about a GCH before 2 years old and try to take your dog to the ring and hand it off to the handler. People will point out that doesn't allow the handler to work with the dog and busy handlers usually do that during Group or after the show. Fair comment but allow them to take the dog on short trips for points. The dog always comes back to you in the same condition it was sent. YOU have control, and if your dog is more than a money maker you will attempt to maintain that control.

The Steele's lawyer mentioned that sometimes a handler receives a sick dog. I see no reason to accept a dog that is sick or injured. That dog should have been thoroughly vet checked before it left to go to the Handler.

If a dog shows up sick or injured at the Handlers door, the dog goes home. The Handler should not have to take responsibility for a dog not ready for the ring.

If the dog becomes ill or injured while in the Handlers care, it should immediately go to a Veterinarian, the owner notified, and arrangements for recovery made. A Handler's job is to get the dog ready and to show. Period. They are not Vets, they are not dog sitters.

Another nice note I received told of a handler injecting a dog before classes. The owner told the Handler to stop giving the medication but he continued. The owner fired the handler and the dog was taken home. This Owner loved her dog, and watched over it.

Dogs can't tell you when they are sick, hurt or afraid - or if medications are given to pump them up or calm them down. Be a Proactive Owner. Keep track of your dog at all times.

As a Handler, I know it's hard to make ends meet. Just remember these are living creatures who provide you with income. They deserve to be treated with love, patience and respect. In return you will the receive respect of the dog community and the trust of the dogs you handle.

Part 1 Dog Show Abuse and Neglect When will AKC finally hear us? How can dogs shown badly out of condition still win? Is it judging ignorance, prestige, or politics?