What do midterm elections have to do with dogs? Watch your TV and pay attention to the “dog politics” of the politicians who seek to represent your interests. 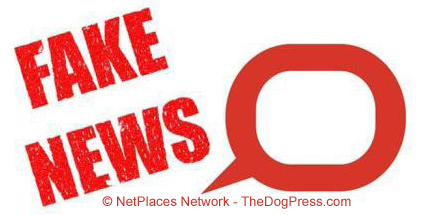 Adolph Hitler said: the simplest lie told often enough changes the minds of masses. This was the philosophy he employed with which to control those who surrounded him. Today it is called fake news. News commentators plant themselves in the middle of elections whereby they determine winners and losers. They embellish the headlines of the day to support the outcome they hope to achieve.

The dog world is a microcosm of the larger world. It too suffers from this “simplest lie philosophy” which is distributed by Hollywood and the mainstream media.

Today’s headlines concerns the mob migration heading towards the United States border. The media sells the story as if one day 7,000 people woke up and decided to flee violence and walk from Central America to the United States. Our heart goes out to them but the fact is, they plan to enter the United States illegally. The question is, why don’t those determined people put the same effort into changing their own country? 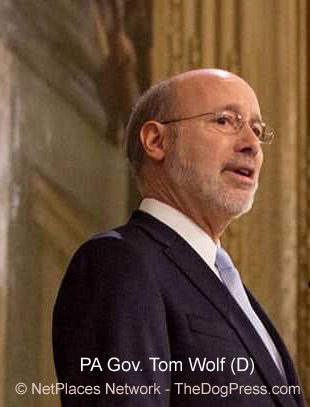 The media is no different when it concerns purebred dogs and breeders. It is obvious that the new kid in town is the “rescue dog”. Hollywood and mainstream media are there to hold the torch for this new fad.

Overblown stories of pet overpopulation flood the headlines. And as predicted, the simplest lie told often enough changes the minds of the masses. Currently Pennsylvania’s Gov. Tom Wolf (D) has fallen victim to these tactics. Gov. Wolf’s reelection campaign is now running a commercial proclaiming that he is saving dogs. The commercial paints the Governor as a hero for dogs, starting with a sad story and photo of an emaciated, abused dog. The commercial ends with Gov. Wolf having signed legislation that gives dogs better lives in Pennsylvania.

The reality is animal abuse laws have been on the books in Pennsylvania since at least the nineteen seventies. These are the same laws that, if enforced, already protect dogs like the one in Gov. Wolf’s commercial. Gov. Wolf simply poured on more regulations and put his name on it. Those regulations hurt the responsible breeder while puppy mills flourish in Pennsylvania because politicians strangle the life out of the good breeder and reward puppy mills.

This new PA legislation now requires pet shops to sell only rescue and shelter dogs! That’s right, with this new legislation your $500 rescue dog has turned into $1000 purchase.

Why the double cost for a dog that needs a home? To cover costs of doing business and allow a profit! Unlike a private rescuer, pet shops have to pay for their building or rented space. They are required by law to have insurance. When selling dogs they must abide by the puppy lemon laws of Pennsylvania. They must provide veterinary care as well as 24 hour supervision of these animals. With unknown temperaments they will have to hire professionals to evaluate each dog. They may even be sued for unknown health ailments or poor temperaments of an animal after it is sold.

The educated dog owner understands that this legislation has nothing to do with saving dogs. It limits the choices of the public and increases their costs. It aids the puppy mills by creating a shelter-marketplace to sell unwanted puppy mill dogs. It squeezes the responsible purebred dog breeder with more and more regulations while rubberstamping the sale of unknown mixed breeds.

PA Gov. Wolf along with many other misinformed state governors are pushing a specific ban on quality, privately-bred puppies being sold in a pet shop. I am not a proponent of puppy buyers shopping at a pet store. I am a constitutionalist. I believe in Life, Liberty, and the Pursuit of Happiness. I believe that the consumer should have a choice of buying a rescue or a quality purebred dog from a breeder or from a pet shop working with the breeder. I do not believe that the consumer should be forced into purchasing rescue or shelter dogs with potential health and/or behavior problems. 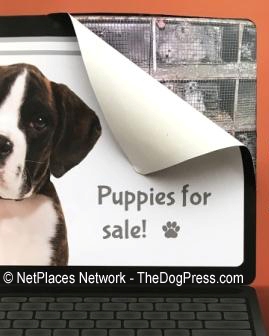 The idea that Gov. Wolf’s legislation will shut down puppy mills is preposterous. The truth is with the Internet today the puppy mills no longer need pet shops. They only need a website. The Internet is a lucrative and expedient way for puppy mills to sell their stock.

Gov. Wolf and all the governors throughout the United States who believe this legislation will save dogs are truly the minds of the misinformed masses.

So before these midterm elections, take time to think of the simplest lie that may be told often enough in the effort to change your mind. If someone has to tell you over and over again that they are a hero for dogs they are probably not.

States leading the list with the most cities that ban the sale of non-rescue pets are:  New Jersey (91 cities) Florida (50) and CA (33)

Where is your state? Find out what you can do about it, inform dog clubs in your state! (offsite link, copy and paste into your browser): https://pethelpful.com/dogs/US-Cities-Where-Pet-Stores-Are-Required-to-Sell-Rescue-Dogs-Only