My daughter is concerned about catching measles after one of her friends got it and now her professor is down with the “flu” which she worries is corona virus!

I raised an eyebrow when she unloaded on me, pointing to her tablet. In January 2020 the www.CDC.gov released a report stating that the highest number of confirmed measles cases (over 5 million) in 25 years had occurred in 2019. It took some digging to find there were a total of 1282 reported cases from January through December 2019. I said I wouldn’t call that an epidemic…

She replied “But now there’s Corona virus! Are we being sabotaged?” I brushed that off but as I used to tell my men, yeah, I held the thought. We hit paydirt. Dr. Wehbi said 2019 was the worst measles outbreak since 2003 and warned “This is definitely an earlier season” stating “there has already been eight weeks of sustained activity.”

If you are over 50 you remember when there was no measles vaccine. We were deliberately exposed so we would get it and become immune. It worked just fine. Today they have a measles vaccination but it must not be very reliable because we’re told you can get measles from flying! Me and my air force buddy had a good laugh over that but that is what they’re saying.

I’m not kidding. In February a New York state associate professor of medicine confirmed that travelers at five US airports had been “exposed to measles” during 2019 Christmas travel. The doctor advised that one dose of the measles vaccine “will protect most people” and that “two doses are much more effective.” Dr. Wehbi said that people born after 1989 may have only received one dose of measles vaccine and suggested that they get a “booster dose” because that would do them no harm.

Did the pharmaceutical companies pay her a bonus for that advice or was it just a poor choice of words? My kid said the “press-push interview” was necessary because people were becoming skeptical of all those booster shots. I do okay online but my college kid has that “device” glued to her hand. She said old-school veterinarians would shake their heads over that “booster dose” advice because they are busy treating dogs for health problems resulting from over-vaccination. Huh. 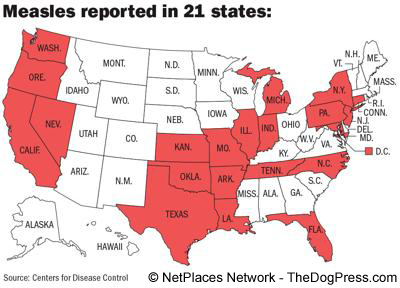 My daughter did a quick google search. They cover the push on vaccines in TheDogPlace.org/Vaccines but yeah, “an outbreak of measles” seems possible because so many of the people immigrating into the United States come from countries where childhood vaccinations are not common. That was an easy conclusion because the most measles-affected states on this map are considered as “immigration friendly.”

The TV doctor also observed that too many adults are opting out of getting measles vaccine and attributed that as the cause of the current outbreak of measles. She further cautioned that children under the age of one year or people who have compromised immune systems could be at very high risk for measles.

We discussed the pro and con. This is your infant, the cancer patient or your elderly grandmother the vaccine-pushers are targeting. Yeah. My daughter said vaccine-makers have been “richly successful” in the pet owner market, pointing out that “today we vaccinate our dogs for diseases that didn’t even exist 20 years ago.” Showing off I said “Like Corona virus…” She nodded, thoughtful.

I kept reading. Most of the measles cases were tracked back to international airports and ports of entry. Specifically mentioned were Chicago's O'Hare, Richmond Virginia Austin-Bergstrom, Denver and Los Angeles. If you or anyone in your family frequent these airports it is worth noting this information. The doctor said we should “take precautions” but isn’t that why we get vaccinated?

Is the problem that immigrants might bring in new strains of diseases or that the vaccines we trust don’t work?

You are probably wondering how vaccine-makers can predict which flu strain will attack us? The answer is they can’t. I looked it up. The pharmaceutical companies make educated guesses and then the vaccine companies take a vote from immunologists. On the basis they decide which new vaccine needs to be manufactured. 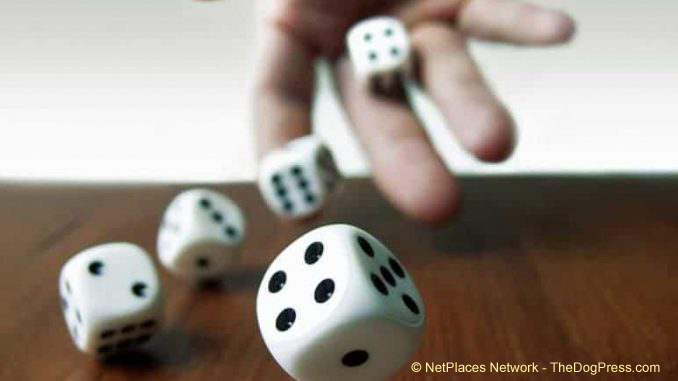 If that sounds like a crap-shoot, yeah, I’ll see you in Vegas… but rolling the dice is the only way the vaccine-makers can weigh the financial and health odds. Let’s hope they stay honest and just “get lucky” every year.

Remember when we only worried about measles, mumps and chicken pox in our children? Then came the dreaded polio virus and thankfully, polio shots. Dog breeders remember when they only gave rabies and distemper shots. Now there’s corona virus from China and people are panicking. Any virus can kill but my daughter said overwhelming our immune systems with an ever-increasing number of vaccines “might do likewise.”

Deciding on if and what vaccines to take or give your kids and dogs is getting harder every year but be glad we are a “developed country.”