This reporter covered a Pug owner who did his own C-sections and a gruesome Whippet case, then contacted AKC Inspections and here's the informative American Kennel Club's response. 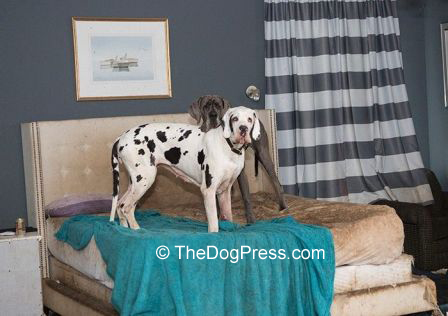 In Wolfeboro NH, 84 Great Danes were taken from “Unsafe and Unsanitary” conditions, with limited access to food and fresh water. These dogs were seen walking and sliding in their own feces according to the HSUS group that rescued them.  The rescuers were reportedly overcome by the smell of raw chicken, feces and ammonia. The Danes lived in a mansion according to Fox News and TheDogPress.com coverage. They were not reported to be sick, starving, or abused. If anything, they were over-indulged by an owner who herself needed help. What isn’t clear is why the Humane Society of the U.S. and news media chose the saddest and most horrific photos of Great Danes in cages or looking through “bars” but not one of those photos had anything to do with the Wolfeboro Great Danes.

According to the Union Leader, the primary reporting newspaper, the HSUS said the big dogs were being held at a veterinary clinic. We assume the Great Danes found homes quickly. 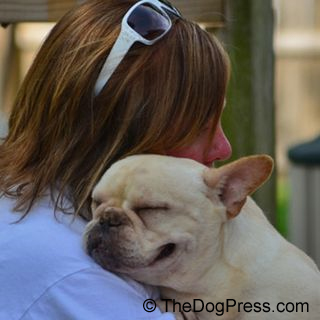 French Bulldogs along with other breeds were rescued May 3, 2017 in NW Indiana. ABC News reported dogs that had died were buried behind the barn they lived in. Most of the dogs had never seen daylight, living their lifetime in filthy conditions. The dogs were taken to the Lake County Adoption Center, a No Kill Shelter in Crown Point IN.

It was also reported that the owner had performed his own c-sections! Frenchies do usually need cesarean delivery if they fit the breed standard but the surgery must be done by a licensed veterinarian!

I contacted the American Kennel Club to see how they handled the registration of puppy mill dogs. Following is AKC’s reply:

“The AKC spends over $6 million each year to inspect our customers, thereby ensuring the integrity of our registry and the proper care and conditions for dogs registered with us. When AKC inspectors find kennels that do not meet our minimum requirements, they encourage those breeders to raise their standards or face suspension of their AKC registration privileges. Proper authorities are also alerted to any cases of animal neglect. You can learn more about our Investigations and Inspections Department by visiting akc.org/investigations.cfm.

“Without the AKC’s Compliance program which inspected over 5,600 kennels in 2007, there would be very little oversight of dog breeding in this country as only a fraction of commercial dealers are monitored by the USDA under the current provisions of the Animal Welfare Act (breeders and importers who sell all of their puppies directly at retail currently fall outside any federal regulation, regardless of the volume of activity. The AWA currently covers only breeders who wholesale their puppies). Therefore your efforts would be much more effective if you spent time lobbying the USDA and state authorities for increased standards and more comprehensive enforcement in regards to commercial breeding.

“Sometimes the AKC is accused of only being concerned with profit, however you should note that our increasing emphasis on compliance with AKC regulations has in fact resulted in a loss of customers – those who refuse to be inspected, who do not meet our standards or who purposely choose not to register with us in order to avoid coming into compliance -- yet we continue to infuse that department with resources so that we can feel confident that our registry has the utmost integrity. In this way, the not-for-profit AKC has voluntarily given up millions of dollars in income in order to do better by dogs.

“If we chose not to register dogs from anyone selling dogs commercially then we would simply be opting to surrender to unfounded criticism rather than take the more difficult path that we have chosen: to raise the standards of commercial dog breeding in this country. Our refusal to register segments of breeders would not discourage breeding. It would result in few breeders being inspected and compel them to use one of the 30-plus other dog “registries” (none of which have any inspections or enforced regulations) that specifically cater to breeders who purposefully avoid the AKC because of our compliance standards.

“I encourage you to learn more about the issues and obstacles that affect the welfare of dogs in this country. I have no doubt you will see that the AKC uses our resources in ways which support practical and viable solutions to complex issues and that we work tirelessly to benefit dogs. If a reply is necessary, please include all previous correspondence.”

As you can see, the letter sites AKC inspection of kennels in 2007, not 2017! My questions were sidestepped. I asked what they were doing to educate the public about puppy mills. No Reply. I also asked if registering so many pups to one owner sent up a flag. No Reply. In fact, the tone of the letter was on the offensive rather than helpful.

As I researched and found massive amounts of dogs being abused and not much to indicate AKC Inspections has had significant impact! 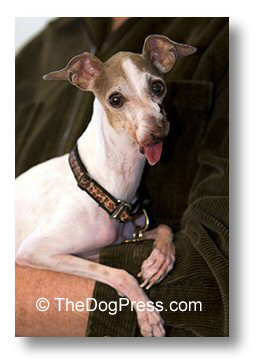 One person who is making a difference is Theresa Strader Founder and Executive Director of The National Mill Dog Rescue in Peyton Colorado. Theresa and her staff of devoted volunteers make sure these abused dogs live the rest of their lives with love. It all began when Theresa bought 13 dogs at an auction in Missouri. Among them was Lily, a 7 year old Italian Greyhound who had been bred repeatedly from her first heat. She spent her entire life in a cage producing pups, with no veterinary care, drinking from a rabbit water bottle, being fed the cheapest food available.

By the time Lily was rescued, THE ROOF OF HER MOUTH AND LOWER JAW HAD ROTTED AWAY. She was covered in mammary tumors, and humans terrified her.

Lily and thousands of other puppy mill dogs now have loving homes, warm beds and good food thanks to The National Mill Dog Rescue. To read more about Lily and other dogs, please go to www.milldogrescue.org or their facebook page. If you can, please make a donation to help dogs like Lily.

It is clear to me that AKC has no interest in stopping the atrocity. I call upon each Breed Club to send out members to schools, 4-H meetings, senior activities, any type of gathering where you can educate people about what is happening to these dogs. Through reaching out, offering education and kindness, we CAN stop the abuse of these wonderfully forgiving animals.

Hug your dog a little closer and say a prayer for those who are waiting for a home. ~Dog Bless