If you are spent out from handler fees, discouraged or worn down by AKC dog shows, read this, chuckle, think… and enter a United Kennel Club show!

It started as any other Colorado day. Mountains to the west, and Home to the east. 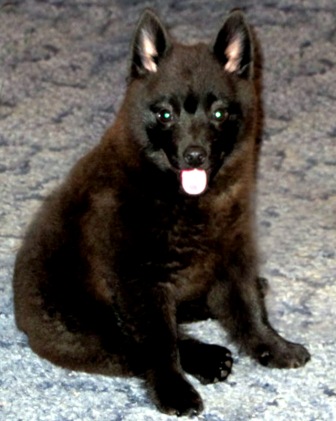 My friend and cohort in doggie crime Karen unloaded her SUV and hauled everything inside to prepare for Show One on Saturday at the Twin Peaks Kennel Club show. We looked like we were pretty serious as we hauled her dolly stacked high with Schipperkes dog crates and equipment for grooming such as blowers to fluff coats, the grooming table for them to stand on, towels, collars etc. I followed along with my soft crate, grooming bag and cooler with cool coats inside, and Boxer on the other side. I travel light.

As we set up camp I called out to the photographer, an old friend, to come see what Karen had brought. He moseyed over- I don’t recall him ever hurrying- to see what was up. Karen pulled out a tailed Schipp pup and handed him over. Schipps are normally docked per AKC Standards. Because Moe was small at birth she decided to leave him tailed for less stress on his system. It was love at first sight for both of them.

Magnum, formerly known as Moe, now has a wonderful home. Win Number One!

My Boxer was the only male, so I bravely forged ahead to impress the Judge. Of course he had to do his Throw-My-Hind-Leg-Out-When-Stacking. Every time I tried to reset it, he would stand with it up, his flank pressed into my knee looking like he was watering a tree. The very kind Judge suggested I go underneath to set his foot. It worked once. 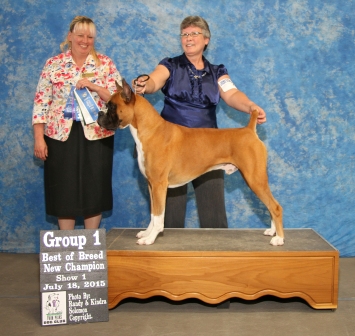 Somewhere during my 60 years I lost my filter. If I think it I say it. So I told the Judge I was a SHOW VIRGIN. This was not entirely true as I had trotted trained Schipps around the ring and won, but I didn’t have to SHOW them. They show themselves. As a naturally square dog they stack on command and I just hold the leash. This was the first time I had ever taken one of MY dogs in the ring. The judge took mercy on us when she finally gained her composure and gave us a GROUP 1!

We didn’t do as well at the other three shows, a Group III and two Group IV’s, but we PLACED!! People loved my dog and that was better than ribbons.

He crawled in laps (a great feat for an 80 pound dog!), gave kisses, high fives and hugs. He was the diplomat for Boxerdom.

People were amazed that it was my first time showing him. I WAS AMAZED! I didn’t fall down. I didn’t trip over him or the mat. I didn’t cuss (see filter above).

What I DID do was have so much fun meeting people, talking and laughing at the Shih Tzu puppy that melted into a puddle of fur and eyes during the down and back.

Did I mention this was a United Kennel Club show? If not, I have done them a great disservice. The shows are so much fun, so relaxed, many of the dogs competing are AKC Grand Champions. The owners want to show their dogs themselves and have fun doing it.

My friend finished two of her Schipps, a bitch and dog. Her dog went into the Best In Show ring and took Reserve at the end of the day. I brought home a New Champion who begged for an ice cream cone.

We drove the 3 ½ hours home tired but happy. I can’t wait until the next UKC show!! 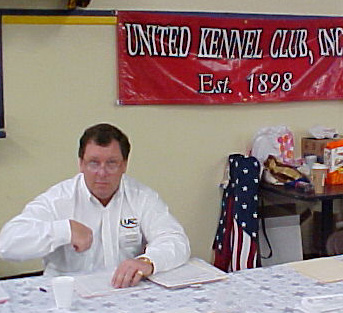 I hope you will attend or enter one soon. They have some new breeds that I cannot begin to pronounce the names. UKC is family-friendly so enter the kiddos in Jr. Handler, take your puppy or Veteran and make a day or weekend of it. UKC usually has 2 shows a day and plan them for 3 days. You can easily finish your dog in a weekend if you have competition. If you have more than one dog, people are happy to take one in for you. It’s all about the dog and having fun in UKC.

I am hoping we will be in the Top Ten and get an invitation to the Premier held in Michigan in June. The UKC Premier is the Westminster of dog shows, on a friendly scale. No Pro Handlers. Just you, your dog, and your chance to shine with others who have made the trip for a chance in the spotlight with their much loved couch potato.

NEXT: that pesky Three Point Major for AKC. It could happen. If the stars align, I stand on one foot, cross my fingers and recite the alphabet backward!

Dog Bless. See ya around the ring.