Most dog owners have a Will but have you planned for a time when someone needs to take care of your dogs, their emotional needs as well as exercise, feeding and meds? 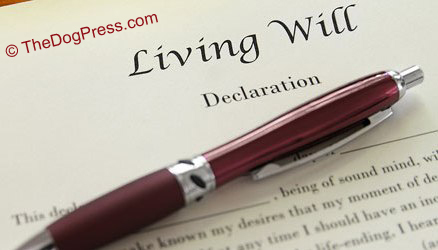 Many of us in dogs are so busy we’ve never thought about a living will. There is going to be an in-between time when we may be ill, incapacitated, or losing a little bit of function. When (not if) that happens, somebody needs to know exactly what to do about our financial situation, any daily prescriptions, and our dog situation.

A Will only takes care of things after we’re gone but it doesn’t do anything for those in-between times. There are many dog fanciers who sort of live like loners and they don’t have a lot of people coming and going because it upsets the dogs. Or, in some cases, the house is messy because we have too many dogs.

There is often that in-between times like, for example when I had my heart attack, who would have known? I could have died and my dogs would have suffered if I didn’t have a friend here plus our daily phone group.

There’s a woman right now in Louisiana who had been in and out of the hospital over a period of 2 or 3 months but none of us knew anything about it. The county finally came and took her dogs! None of us want this to happen. The point is only someone they talk to on a daily basis would suspect something might be wrong if they didn’t hear from them.

That’s just one reason why a living will is so vitally important-so that we can give directions for the care and/or disposition of our dogs.

Another thing that is even more important in case something happens and someone else has to come in and take care of our dogs is to have everything written down. A whiteboard or chalkboard, in a prominent place where anyone coming in to check on the dogs would see it. 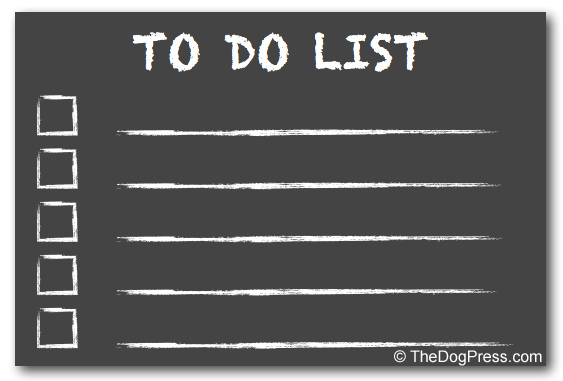 That chalkboard would have a listing of what each dog is fed and how much. Any medications a dog is receiving and how often. And of course, each dog has to be identified. Many breeders don’t like to have collars on the dogs but they can be otherwise identified, perhaps a little snapshot on each dog’s enclosure so anyone can be sure which dog goes where. That way anyone can see that this is Susie and this is Rachael and hopefully, call them by name so the dog “gets it.”

The photo I.D. avoids mix-ups. For instance, if we’re looking at German Shepherds or Manchester Terriers, well, they all look alike to most people. Having dogs micro-chipped means having the scanner handy and since most people don’t know how to use it, there should be visible basic info and how to match it up with each dog’s implant.

I would also say that each dog’s microchip number should be written or attached to that dogs registration papers, along with a fairly current photo. Also the registration and/or the photo of the dog should have a “call name” written on it. The dog will be somewhat reassured to be called correctly, by the name he knows.

The fact is, and we all know this, even though AKC requires it, most show breeders don’t have each dog identified by any particular means that a stranger would understand.

And in some cases, depending on the breed, it would be vitally important to have notations about which dogs go out together and which dogs cannot be together. There should be current notations on the clip board about which dog is in season, which dogs are on what medication. All of that information can be critical for the dogs themselves and for the person taking care of them.

We’ve got 8 dogs in the house and they all look alike. So every night when they get fed and put out, the chart is checked off for each dog. Just a routine safety thing. That way you don’t forget anybody and no dog gets medicated twice. Both of us know which dogs are out or in or waiting to go out.

This would not need to be in a Living Will or even a health care power of attorney but updatable instructions and dog identification would sure be helpful to anyone stepping in to care for the dogs in an emergency. We are all reminded of the California fires and other natural disasters where neighbors helped neighbors. This is common sense preparation for the unforeseen. It is care and concern for your dogs and whoever takes care of them.

In our group we have a simple email message sent every day. The group members are supposed to hit “reply all”. It doesn't always work but if a member doesn't respond one of us will call again and check to make sure all is well. It is important that someone, preferably several people, know who to call in case of emergency, disability, or death. We don't want to languish in ill health or a coma.

Make sure this doesn't happen by having advance directives and a power of attorney. Remember, our wills will only be read after our death. It will do nothing for the "in between time".