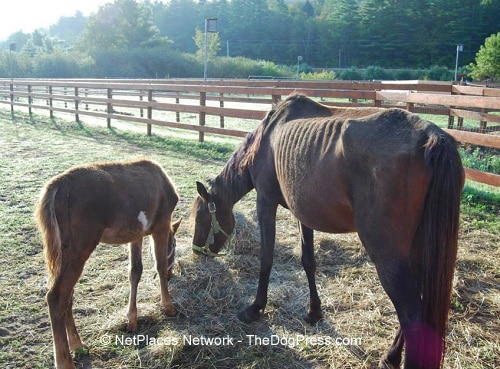 This report on the Shelly Wing case centers not on guilt but on the confiscation of 40 horses by a rescue group which allowed the county to claim $43,890 for one month’s care. This photo of an emaciated mare and foal on the Wing property reminds readers that animals taken in by rescue groups are often neglected to the point of starvation.

The skeletal remains found on the property indicate either unforgivable animal abuse or that this mother and daughter did not turn away terminally ill horses. TheDogPress.com makes no judgement in presenting you with the case facts.

This NY cruelty case was chosen because of problems pointed out by Nancy Guttenberg, a nationally recognized New York state attorney who often represents the interests of both animal owners and the animals themselves. We agree with attorney Guttenberg who said it should not have been handled at the local level. Ms. Guttenberg is quoted as stating “A bond was set for $40,000 and change, which exceeded the jurisdictional amount of the court.” She further observed “The proper form for this case was New York Supreme because of the jurisdictional limit of the court..”

There were however, other problems represented by this case. Big problems. The Essex County Attorney Daniel Manning said a local judge ruled that the horses could be seized by the county. The judge then ruled that the owner of record, an animal sanctuary, lost custody of the horses when they “failed to put up security for $43,890, representing a month’s care for the animals.”

$44,000 Per Month Reeks Of Gouging. The average national cost to board a horse is well under $500 per month. Who decided to impose the maximum $$$ amount for boarding is unclear but over $1,000 per horse per month sounds like a profitable racket, even allowing for veterinary check and any medicines or undefined service. 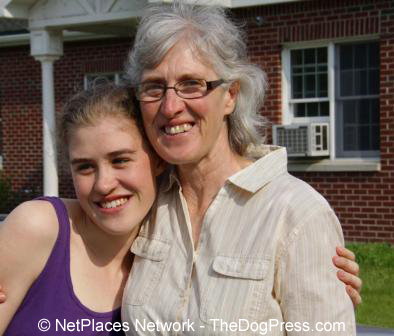 The mother and daughter (Wing and a Prayer Farm) who took in the horses “are both charged with 41 counts of failure to provide sustenance under State Agriculture and Markets law, a misdemeanor punishable, per count, by a fine of $1,000 and up to a year in jail.” Under NY State law this is the maximum fine allowed.

Authorities took nearly 1800 photos of the horses, property, and horse skeletons found thereon. They took veterinary statements to substantiate the horses’ physical condition, specifically that they currently (?) or previously suffered from a lack food and water, exhibited various injuries and/or parasitic infections.

What is not clear is how many horses were suffering starvation or untreated health problems at the time the arrests were made. It takes a lot of time and money to bring a badly neglected horse back to good weight and condition. A logical person might assume the horses were rescued because they were sick, starving, and mistreated.

Consulting attorney Nancy Guttenberg is an expert on animal neglect cases. She made a trip to the fairground where the horses were being held and was NOT persuaded that the observable condition of the horses “was desperate enough to have warranted removing them from Wing’s property.” She also noted the horses “all had halters on, their heads were up, their ears were up.” The animal-authority attorney is correct in stating that when horses are in a state of severe starvation, “they’re down. You can’t get them up.”

A rational person would conclude that few of the horses were abused but were instead on the way to recovery from previous starvation and neglect. In point of fact, reports indicate that the horses were all re-homed within two weeks which calls to question the $44,000 per-month cost of care. TheDogPress.com apologizes for being unable to provide veterinary reports.

Attorney Guttenberg observed that they placed the horses “immediately, and they weren’t placing them with vets.” She also pointed out that the county could have appointed a trustee to insure hay was delivered and to spare the horses the trauma of being relocated with (unnamed) strangers.

As is often the case in alleged cases of animal cruelty, the real victim may be the owner who, as pointed out by the attorney “still has rights guaranteed by the U.S. Constitution and she has the right of due process.”

The notable fact in this cruelty case is that the horses are/will be fine but the mother and daughter will be forever blemished and ostracized.