A DIRTY TRICK TO ENHANCE PROFITS

Why would any pet food contain clay? Answer: because it saves money, just like feeding dogs to dogs… 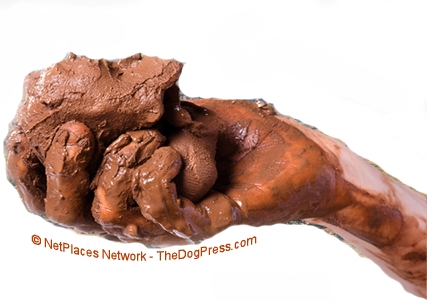 For twenty years livestock producers have fed contaminated grain, adding Motmorillonite Clay to keep animals from being poisoned. Now there’s clay in some pet foods. Read more for ii The Carnivores Diet instead.

The Food and Drug Administration, the EPA (Environmental Protection Agency), and the Food Safety Inspection Service of the USDA (Department of Agriculture) worked for months tracing  cancer-causing dioxins back to the practice of incorporating clay additives into feed grains that are contaminated with toxic fungi and molds.  Accepting dioxins in clay is a short term trade-off for slaughter animals that won’t live long enough to develop cancer.  The clay controls the aflatoxins in the animal’s gut so they do not become ill or die from eating the toxic grain, thus eliminating losses on destruction of the grain.

More than a decade has passed since the FDA appealed to producers to stop using clay in poultry and animal feed after high levels of dioxins were detected in humans and chickens.

“In a letter dated, October 7, 1997, the Food and Drug Administration (FDA) asked producers or users of clay products in animal feeds to cease using ball clay in all animal feeds and feed ingredients.” (1)

According to the University of Missouri education website, as of May 2010, use of any “dietary additives including various clay minerals do not have FDA approval for detoxifying mycotoxins.”  In typical government bureaucracy, on the one hand, the FDA says cease using ball clay in all feed ingredients and on the other, it seems they approve its use as an anti-caking agent in soybean meal - a feed ingredient.  A common pet food ingredient in various forms, soybean meal may contain natural earth known as white clay, ball clay, kaolin, bentonite, and even unfamiliar trade names, but you are unlikely to find anti-caking agents listed on the pet food label.

Because it is so absorbent, uses for clay abound, including as binding sand for foundries, absorbing grease and oil, serving as a barrier for seepage from landfills and nuclear waste sites, and filling kitty litter boxes.  It is approved for occasional use in pharmaceuticals such as Kaopectate and has been reported useful in treating Irritated Bowel Syndrome.  It is likely to be in many “dewormers”.  Clay was an early medicinal treatment used by ancient people for a variety of health reasons.  More recently naturopathic medicine and natural health trends have reverted to this old remedy.  Intended for short term use, clay may be no better or no worse than cures that the drug industry churns out.

Geophagy, the practice of eating clay, can be traced back to Africa and was referred to as Cachexia Africana. The results of frequent clay eating were a swollen appearance, enlarged heart, increased urination, dry shiny skin, ulcerations on arms and legs, and even death. Today, certain types of clay are used cosmetically but ingesting clay is unusual except in India where it can be purchased in open markets, and ironically, trendy California where soil tastings are a faddish but risky phenomenon.

So although clay supplements are available for both people and pets, used internally, bad side effects are a reality. In humans, heartburn, gas, loss of appetite, constipation, diarrhea and vomiting are reported.  One safety study indicated that one brand of clay (sold as a human supplement) produced most of these symptoms plus abdominal pain and bloating after a couple of weeks of use. Eating clay has also been linked to intestinal blockage and bowel injury (including rupture and stones) as well as enlarged liver or spleen. Unfortunately, animal studies and data appear very limited.

A wide range of clay remedies for internal use such as colon cleansers and detoxification agents are available.  Could it be that health claims are grossly exaggerated and safety overlooked?  Perhaps, but knowing aboutCachexia Africana, would you ingest clay on a regular basis.  What about feeding it every day to your cat or dog?

We now also know that clay binds with mycotoxins during the digestive process controlling up to 66% of aflatoxins in contaminated grain.  Feeding such grains is a money saving measure for the farm and feed industry, but there is no excuse for using contaminated grain in pet food.  Not one.  Our dogs should not become “short-lived” due to deadly ingredients incorporated into pet food.

Pica is a modern term for an eating disorder involving dirt, clay, and even animal feces. In addition to mental retardation, it has been associated with lead poisoning, low red blood cell count and brain damage. Drinking from unglazed earthenware has resulted in death from lead poisoning, and there have been recalls associated with lead in candy packaged in clay pots. Risks of central nervous system damage and neuro-degeneration leading to paralysis are possibilities.

For those who would argue that African elephants are known to eat clay and tropical birds are believed to consume it after eating toxic fruits, the key point is that animals occasionally seek certain kinds of clay for cleansing or buffering the intestinal tract. They do NOT eat clay on a regular basis and feeding it to our dogs and cats day after day is NOT a good idea.

Any aflatoxin contamination should be stopped at the manufacturing level and not in the colons of pets after cat or dog food is ingested!  And for goodness sake, what does that say about the grains used in pet foods? Instant Information on ii Aflatoxin Symptoms.

While occasional use of clay to relieve a health problem may actually work, a steady diet of clay for your dog or cat is just asking for problems. We already know that soybean meal is a dirty name in pet food ingredients and the addition of clay as a caking agent is no less problematic. Wise owners check ingredients (2), read labels and reject pet foods containing any kind of clay.

Get more Reference and Related information and dig for gold below.