and FDA fails to protect the human food chain.

FDA does not state what industrial uses are acceptable but economists agree that farming is an industry. Has FDA combined categories? Is feeding pet food to farm animals still allowed? Or are imperiled pet food companies practicing risking disposal methods? 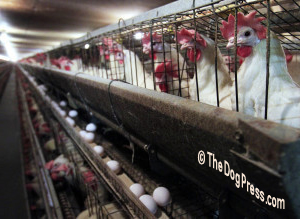 In May 2007, CNN reported (1) “Feds: Millions have eaten chickens fed tainted pet food …an investigation of chicken farms in Indiana found that 38 of the facilities had given contaminated feed to poultry raised for human consumption, and that 2.5 million to 3 million people ate them… officials added that they expect to discover that chickens on possibly hundreds of farms in other states were also given tainted feed.”

Included in the CNN report was a conciliatory statement from Richard Lobb of the National Chicken Council “Lobb said the chicken feed may have been contaminated as a result of a practice common among pet food manufacturers - they sometimes sell their leftover material to manufacturers of chicken and pig feed.”

So was it the pet food or the chicken industry that would have us believe it was just scrap from the pet food manufacturing process?

The Washington Post ran a similar headline on the same day, but revealed that hogs were also fed recalled pet food. (2) “The USDA first announced on Thursday that meat from 345 hogs suspected of eating the contaminated feed had entered the U.S. food supply. Some 6,000 hogs suspected of eating the contaminated product have since been quarantined and meat from these animals will be withheld from the food supply, both agencies said.”

The amount of so called scrap seems excessive considering how much feed it would take to feed so many farm animals. The feed was out of the bag when immediately following, Pork.org made this much more honest revelation:

“On April 3 and April 14, Diamond Pet Foods, a pet food manufacturer in Lathrop, Calif., delivered pet food to a hog farm (American Hog Farm) in Ceres, Calif. The pet food is believed to have been included in a pet food recall initiated on April 16.”

This was manufactured dog food going directly to the hogs’ feeding stations, just two days before a voluntary recall of products containing rice protein concentrate started on April 16. So it was not scrap, and credit to the pork organization for saying that they believe it was pet food included in the recall.

The delivery event leads us to think that pet food manufacturers, hog farmers, and chicken farmers, have working relationships. How much recalled dog food went directly to the chicken and hog farms? How much is routinely sold to feed processing plants, as the pet food industry would have us believe.

The news reports validate our belief that the FDA regulation (law) does not do what is intended. It fails to protect the human food supply chain or even the pet food chain. The contaminated dog food recalls seem to be a voluntary action by the manufacturer, not something ordered by the FDA. Recalls diminish profits, and incineration and landfills are costly. In light of all of this, our questions become more urgent.

FDA regulations for industrial uses should be carefully defined and the destination should end in the USA. FDA indicates only that State and Federal regulations apply. Once in the hands of others, regardless of geographic location, pet food makers lost all control of recalled products.

Free Trade Zones and Free Ports in other countries allow goods passing through to be labeled as coming from any country that the sellers choose. Locations/addresses for many internet pet food suppliers are noticeable absent from their websites.

The wide range of selections, package designs, colors and sizes of products from the pet food industry makes it unlikely that a consumer would notice a package which is not authentic. We must wonder how the manufacturers keep track of their own products and it looks more and more like it is a battle that they are losing. The FDA’s loose control puts cat and dog food companies in jeopardy because it apparently cannot force a mandatory recall.

The growing number of dog food recalls, counterfeiting, and the industry’s inability to control domestic or off-shore handling are reasons enough for the Obama administration to call for an FBI investigation of the entire pet food industry. We need to find out why the FDA cannot protect the food supply for both animals and people.