We are loved by dogs but some of us have had a special dog in our psyche as well as our heart. We call them heart dogs or ghost dogs. This Borzoi was her spirit dog, has this happened to you? Tell us below. 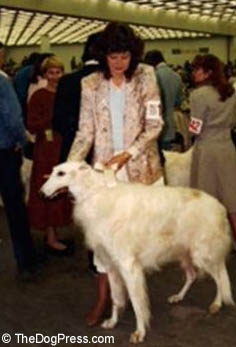 I first laid eyes on Ch Utkinton Ajax of Zencor, a handsome male Borzoi, when I went to work for his owner, Shen Smith, Bokhara Borzoi as a kennel attendant.

I came from a show background in Saint Bernards but when I first saw Ajax, I was head over heels in love. I have never been so struck by any being in my life with the exception of my son. Never since.

Borzoi can be aloof and I had to work at gaining his love but when it came, it matched my own love for him. Soon there was a litter due which Ajax had sired and I was offered pick. An Ajax son was to be mine!! Tobias was the last of thirteen puppies born to his dam, Goldie.

My husband was active duty Coast Guard and after a year and half, he received orders for transfer to Florida. I was devastated! Not that we were being transferred but that I would have to leave Ajax behind. So I told Shen that should she ever want a home for Ajax, he always had one with me. She thought about this for a minute then said, take him, he's yours. Ajax had suffered an injury to his rear leg a few years earlier and had arthritis in that leg. The Northern MI Winters were getting harder on him at nine years old.

I put a lead on him and loaded him into my car and home we went!

I cannot tell you the joy I felt at not having to leave my heart back in MI. Ajax made the trip to FL along with his son Tobias and our Great Dane female, Dana who he absolutely adored. 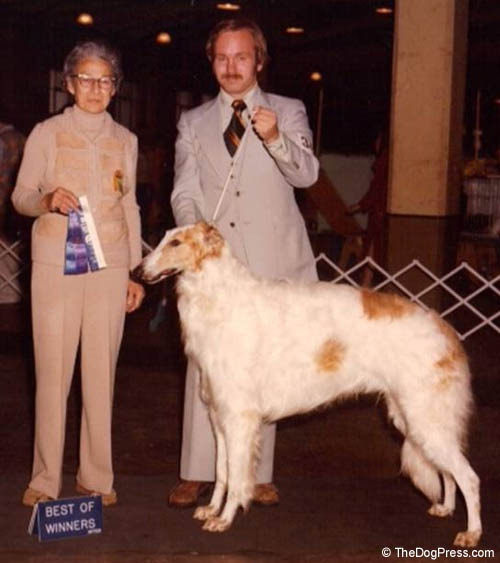 Now that we were together every day, our bond grew closer and closer. I can't tell you how but I always knew what he wanted and when he wanted it. Ajax was in my head, I could hear him but no, he did not speak words, I just knew.

Life was wonderful with Ajax in it until it wasn't.

He turned twelve in August of 1988 and he had really slowed down but blood work and check-ups were all normal. One night, he refused his dinner. He was always a picky eater but this was different and I knew. Next morning he refused to get up. My head was quiet but he was still there, letting me know. I called my Vet and told him I was bringing Ajax in. He knew how special my Ajax was so they were waiting at the door for me and helped get him into the clinic. They insisted I go home and wait for them to call me. I did but it was very difficult to leave him there.

Half an hour later I got a call, he had a mass on his spleen and no white blood count. There were things we could do, transfusion was possible and might give him more time but he was not strong enough for surgery. My husband drove me back to the clinic. 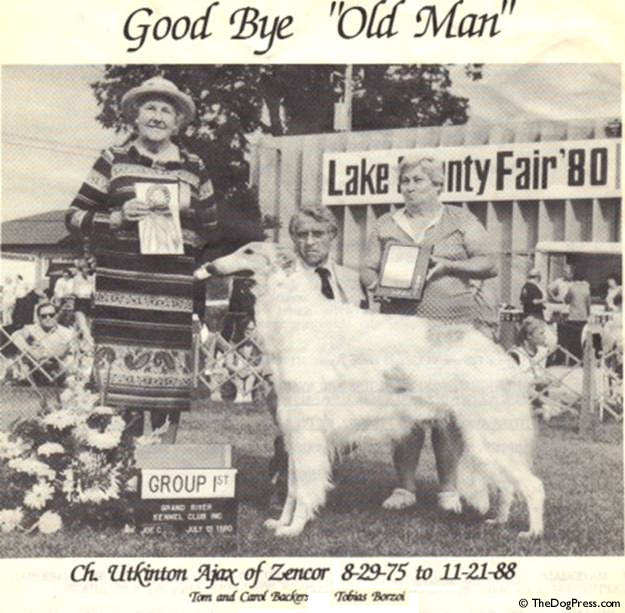 Ajax was in back and we went to him. After talking to Shen, I had made the decision to let him go before arriving but was still unsure until I held him in my arms. He wanted to go. He was tired. I held Ajax while my Vet gently helped him slip gently away. He listened to his heart and said “Carol, he's gone.” But, no, he was still with me, still in my heart for 30 seconds more. Then, white noise in my head said he had left.

A week passed and then we started to feel and see things. Ajax had this way of just barely touching our elbow when he wanted something. We would be sitting watching TV or eating dinner and suddenly we would feel just the hint of a nudge at our elbow yet, no dog was there to touch.

From time to time we would see just a glimpse of a shadow on the wall yet, no dog anywhere near where the shadow was, matter of fact, they would all be sleeping. For three months we felt Ajax's presence. It could not have been anything else. I was so comforted knowing he was still with me. I was not alone. He stayed to be sure I was OK.

As time went on we felt his touch and saw his shadow less and less until I sensed that he had finally moved on.  Ghost Dog? I think Ajax was much more than that.

We thank Carol for sharing.  If you have had a similar experience, let us know in the comments section below.