Which is It? Herbicide or Food?

Corn Gluten Meal (CGM) is classified by EPA as a "minimum risk pesticide" so what is it doing in human and pet foods? See below for renal (kidney) disease information, symptoms, and BUN to creatinine ratio in dogs and cats.

One corn gluten meal product was actually registered as a biological pesticide (Trade Name: WOW Plus, CAS Registry No. 66071-96-3 OPP Chemical Code 100137). This means that 99% of corn gluten meal products can be sold without going through EPA's registration process. CGM is a pre-emergent herbicide used to kill and control weeds like chickweed, dandelion, foxtail, purslane and pigweed, to name a few.

Corn Gluten Meal is touted as posing no health risks for people or animals. Nevertheless, users are advised that CGM should not be applied to areas where it is likely to wash directly into watersheds since its breakdown will produce nitrogen. Nitrogen may be good for your lawn, but it is not good in our water or food supplies. (Note: Nitrogen feeds the ever-increasing toxic algae that lakes off limits to swimmers.)

Corn gluten meal is used in pet foods and animal foods as an inexpensive protein source. It is high in cysteine (cause of urinary stones in dogs and cats) and low in lysine which promotes immune system health. Many dogs and cats can develop an allergy to corn after eating CGM for an extended period of time. The same holds true for poultry and cattle as well as humans. Food allergies in animals and humans lead to internal inflammation and digestive problems. Corn gluten meal is just one cause of such food allergies.

Corn is a potent source of Omega 6 fatty acids but if not balanced with Omega 3s, the potential for cancer growth increases.

Corn is the number three canine food allergy and in addition, corn is prone to a deadly mold called aflatoxin. (Instant Information on ii Aflatoxin Symptoms)

Aflatoxins are a mycotoxin produced by many species of the fungus, Aspergillus. It is one of the most powerful carcinogens found in nature. High-levels of aflatoxin exposure can cause liver cancer in humans and pets and it is sometimes fatal to livestock.  Traditional fungicides are ineffective against corn aflatoxins.

Corn gluten meal can be made of both GMO corn and non-GMO corn but since it is a byproduct of processing corn to make corn starch and corn syrup, chances are good that both sources are mixed together before sales. Therefore the careful consumer has no way of knowing if the corn gluten meal contains genetically modified corn.

We would like to think that these residues would be so diluted as to render them harmless but the fact is that we can’t be certain of that especially when they are found in the majority of our food supply. A little here and a little there adds up for both humans and animals and all experience the same adverse health consequences.

Q: Why is there a rise of kidney disease in people and their pets??? A: Too much nitrogen in the bloodstream that kidneys are unable to filter out.

BUN: Blood Urea Nitrogen. Bun measures the amount of nitrogen that is found in urea. Urea is made when protein is broken down in the body. It is made in the liver and passed out of the body via urine. If the kidneys cannot remove urea from the blood the BUN level increases. Heart failure, dehydration and/or a diet high in protein can increase the BUN level while liver disease and damage can lower it. 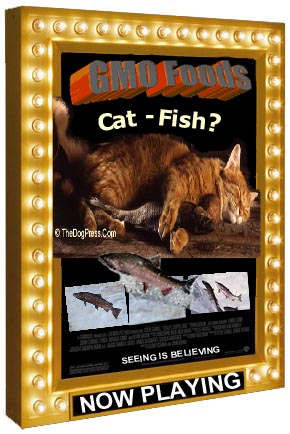 The creatinine level in your blood indicates how well the kidneys are working.

Remember, Corn Gluten Meal is used as an inexpensive source of protein and its breakdown product is nitrogen. Just a note to those of you who drink protein shakes – check the ingredients on the label. Is CGM or any of its other names listed? There can be other causes of high BUN rates, but since CGM is prevalent in our food supplies, removing it from our diet and from our pets’ diet can be a big step in the right direction to preventative health care.

Signs of Renal Disease in Pets

Beginning with increased water consumption and urination. The body will attempt to expel toxins. After a while, the pet cannot consume enough water to expel the increasing toxins, this leads to;