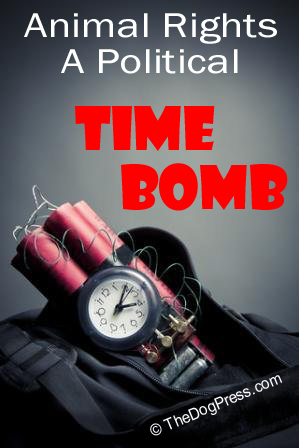 Since the early 90s, the NetPlaces Network has repeatedly warned{1 - Animal Rights Unmasked} that Animal Rights Advocates prefer subversive legislative action to overt terrorism.  Campaign contributions (payoff) to carefully chosen legislative leaders such as Rick Santorum of PAWS fame are much more effective than raiding animal research laboratories in outright acts of terrorism.

The political goals of ii Animal Rights insurrection came under scrutiny by the Department Of Homeland Security due to the potential for acts of violence and terrorism.  Depending on how politically informed you are, you may see us as going backward under DHS leadership but be assured, the FBI ranks ELF as the #1 Domestic Terror Threat{2 - Elf}.  As reported by TheDogPlace, both ELF and ALF (Animal Liberation Front) are repeatedly referenced in the DHS document to which our staff has gained access.

The seriousness of the threat and the scope of the Animal Rights agenda is revealed in the internal report below.  As you read, be aware of what has changed since May of 2008.  Janet Napolitano, the third Secretary of the Department of Homeland Security, has taken heavy fire for her alleged ineffectiveness in controlling U.S. borders even as the privacy debate over TSA and airport screenings rages on.  Just this week, news of the subversive, secretly formed ANIMAL RIGHTS CAUCUS in the California legislature has surfaced.

First, read the internal Department of Homeland Security report, then learn more about how the “animal rights” movement was funded{3 - Animal Rights History} and as the  picture comes into focus in the Animal Rights Legislation{4 - Animal Rights Terrorism} section be prepared to decide how “secure” you feel about your right to own animals.

Ecoterrorism: Environmental and Animal-Rights Militants in the United States 7 May 2008

The term ecological terrorists, 1/ or ecoterrorists, refers to those individuals who independently and/or in concert with others engage in acts of violence and employ tactics commonly associated with terrorism to further their sociopolitical agenda aimed at animal and/or environmental protection. The ecoterrorist movement is a highly decentralized transnational network bound and driven by common ideological constructs that provide philosophical and moral justification for acts of violence against what it perceives to be the destructive encroachment of modern society on the planet’s habitat and its living organisms. 2/ [Ref. opening paragraph at p.1 of report]

The ecoterrorist movement operates as a sophisticated and highly decentralized network. It has no overarching hierarchical structure, nor does it have an elaborate organizational infrastructure. Rather, the movement embraces the concept of leaderless resistance, an organizational model that has no uniform authority or centralized control and command structure.44 Shared ideology and a willingness to engage in illegal and violent activities in pursuit of environmental and animal protectionism provide independent actors with structural cohesion through a commonality of purpose. After all, any individual willing to take direct action in support of the movement’s overall aim—to counter environmental and animal exploitation—is automatically considered to be part of the movement.45

Organizational dynamics are barely present, and, to a great extent, activists operate underground. Personal contacts may play into organizational dynamics, to the extent that individual cells or activists exchange information with each other. However, in the vast majority of cases individuals involved in acts of ecoterrorism are not in contact with other individuals or cells engaged in similar activities. Although autonomous cells and individuals are known to take guidance from Internet materials, which provide the parameters and, often, instructions for an action, they tend to execute their activities independently of one another and the movement at large, yet they are consistent with the overarching slogan, “Think global, act local!”46

External relationships and inter-organizational ties are difficult to assess because the groups that constitute the ecoterrorist movement have highly decentralized structures and do not require conventional membership. Yet, it is clear that there is some degree of interaction between various ecomilitant groups and/or individuals. After all, ELF and ALF are considered to be sister organizations and the newer, more radical groups, such as Arissa and SHAC, are their respective derivatives. The following radical environmental and animal-rights groups share some ideological tenets and operational aims; however, the precise nature of their ties remains unclear:

In addition, various groups that constitute the ecoterrorist movement are also believed to interact, to one degree or another, with mainstream environmental and animal-rights organizations and/or individuals. Although none of the mainstream organizations officially endorses or participates in the illegal and violent activities championed by ecomilitants, some prominent members of mainstream groups are known to sympathize with the ecoterrorist movement. [see reference below]

"According to Martosko, an FBI evidence recovery log from the search of San Diego’s automobile describes a check written to him by Ariana M. Huemer, an employee of HSUS at the time."

Mainstream organizations with known or possible links to ecoterrorism include the following:

Among the highlighted organizations, PETA, the Fund for Animals, In Defense of Animals, the New Jersey Animal Rights Alliance, and certain individuals within the HSUS are known or suspected of having financial ties to individuals and groups associated with ecoterrorism.48

In addition to financial ties to ecomilitancy, both HSUS and PETA, or individuals within those organizations have an established record of supporting individuals and/or groups commonly associated with ecoterrorism.

David Martosko, director of research for the Center for Consumer Freedom, in his testimony before the U.S. Senate Committee on the Environment and Public Works in 2005, gives examples of HSUS’s links to ecomilitants:49

In March 1997, after the ALF arson of a fur farmers’ feed co-op in Utah that resulted in $1 million in damages, Goodwin told reporters, “We’re ecstatic.” In 2000, the HSUS sent Goodwin as its emissary on a tour of Chinese fur farms.

By 2001, Goodwin was an HSUS employee and remains on the HSUS’s full-time staff.

FOOTNOTES herein referred to as fn with reference to original document.

fn 1/  The terms ecological terrorist, ecoterrorist, radical/extreme/militant environmentalist and animal rights activist, ecomilitant, or their variations are used interchangeably throughout this Dynamic Threat Assessment (DTA) and are all meant to convey the same thing.

fn 47/ Earth First! started out as a radical organization that pioneered tactics associated with monkey wrenching. Since the early 1990s, the group has become more mainstream by distancing itself from illegal and violent activity.

fn 48/ For more on the financial links between ecomilitants and other organizations, see Financing subsection under Logistics.

fn 49/ Senate Committee on the Environment and Public Works, Environmental and Animal Rights Terrorism and Its Above-Ground Support System, testimony of David Martosko, director of research, Center for Consumer Freedom, May 18, 2005, at epw.senate.gov/109th/Martosko_Testimony.pdf

It should be noted that the Center for Consumer Freedom is funded by alcohol, tobacco, and food interest groups. Although Martosko’s testimony is often detailed and compelling, some of his claims cannot be corroborated by other open sources.