May 15, 2014 | Elephants would rather be free but they trumpet over the court's decision against HSUS!  See display links and other comments at end of page. 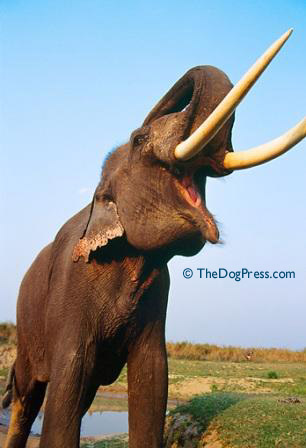 VIENNA, VA - The Humane Society of the United States (HSUS), along with their co-defendants, have paid Feld Entertainment, Inc., the parent company of Ringling Bros. and Barnum & Bailey® Circus, $15.75 million to settle cases stemming from a lawsuit they brought against Ringling Bros.® over the care of its Asian elephants. This historic settlement payment to Feld Entertainment ends nearly 14 years of litigation between the parties.

“We hope this settlement payment, and the various court decisions that found against these animal rights activists and their attorneys, will deter individuals and organizations from bringing frivolous litigation like this in the future,” said Kenneth Feld, Chairman and Chief Executive Officer of Feld Entertainment. “This settlement is a significant milestone for our family-owned business and all the dedicated men and women who care for the Ringling Bros. herd of 42 Asian elephants. We look forward to continuing to set the standard for providing world-class care for all our animals and producing high quality, family entertainment.”

HSUS and animal rights groups the Fund for Animals, Animal Welfare Institute, Born Free USA (formerly the Animal Protection Institute), the Wildlife Advocacy Project, the law firm of Meyer, Glitzenstein & Crystal, and several current and former attorneys of that firm, paid the settlement for their involvement in the case brought under the Endangered Species Act (ESA) that the U.S. District Court ruled was “frivolous,” “vexatious,” and “groundless and unreasonable from its inception.” Today’s settlement also covers the related Racketeer Influenced and Corrupt Organizations Act (RICO) case that Feld Entertainment filed against the groups after discovering they had paid a plaintiff for his participation in the original lawsuit and then attempted to conceal those payments.

In December 2012, the American Society for the Prevention of Cruelty to Animals (ASPCA), a former co-defendant in the case, settled its share of the lawsuits by paying Feld Entertainment $9.3 million. Today’s settlement brings the total recovered by Feld Entertainment to more than $25 million in legal fees and expenses, which the company actually spent in defending the ESA case.

“After winning 14 years of litigation, Feld Entertainment has been vindicated. This case was a colossal abuse of the justice system in which the animal rights groups and their lawyers apparently believed the ends justified the means. It also marks the first time in U.S. history where a defendant in an Endangered Species Act case was found entitled to recover attorneys’ fees against the plaintiffs due to the Court’s finding of frivolous, vexatious and unreasonable litigation,” said Feld Entertainment’s legal counsel in this matter, John Simpson, a partner with Norton Rose Fulbright’s Washington, D.C., office. “The total settlement amounts represent recovery of 100 percent of the legal fees Feld Entertainment incurred in defending against the ESA lawsuit.”

In the original ESA lawsuit, Feld Entertainment discovered the animal rights groups and their lawyers had paid over $190,000 to a former circus employee, Tom Rider, to be a “paid plaintiff.” The Court also found that the animal rights groups and their attorneys “sought to conceal the nature, extent and purpose of the payments” during the litigation. Their abuse of the judicial system included the issuance of a false statement under oath by Rider, assisted by his counsel, who the Court found was “the same attorney who was paying him” to participate in the litigation. The Court found in addition to Rider being a “paid plaintiff,” that the lawsuit was “frivolous and vexatious.”

Additional information on this settlement and the underlying litigation can be found at www.ringlingbrostrialinfo.com (offsite link, copy and paste URL into your browser)

Feld Entertainment, Inc. is the worldwide leader in producing and presenting live family entertainment that lifts the human spirit and creates indelible memories, with 30 million people in attendance at its shows each year. Feld Entertainment’s productions have appeared in more than 75 countries and on six continents to date and include Ringling Bros. and Barnum & Bailey, Disney On Ice, Disney Live!, Marvel Universe Live! and Feld Motor Sports. More information can be found at www.feldentertainment.com (offsite link, copy and paste URL into your browser)

Ringling Bros. is a world leader in the care and conservation of the endangered Asian elephant. In 1995, the Ringling Bros. and Barnum & Bailey Center for Elephant Conservation®, a state-of-the-art facility dedicated to the reproduction, research and retirement of Asian elephants, was created on a 200 acre site in Florida. Information on the Center is available online at www.elephantcenter.com (offsite link, copy and paste URL into your browser)

See this notice by Charity Navigator:

"On May 15, 2014, Feld Entertainment ended its long running legal dispute with the Humane Society of the United States, the Animal Welfare Institute, the Fund for Animals and other non-profit animal rights groups who had accused the Ringling Brothers and Barnum & Bailey Circus of abusing its world famous elephants, in violation of the Endangered Species Act ("ESA")."

and this June notice by USSportsmen.org:

"Charity Navigator, the nation’s largest and most-utilized evaluator of charities, has stripped their rating of the Humane Society of the United States (HSUS) and other animal rights groups and replaced them with a “Donor Advisory” warning.

"Charity Navigator rates organizations from one to four stars, with four being the highest rating possible. According to Charity Navigator, a “Donor Advisory” means that “serious concerns have been raised about this charity which prevents the issuance of a star rating.”

"The move comes after Feld Entertainment, Inc., operator of the Ringling Brothers Circus,recovered $15.75 million in attorney fees from HSUS and their codefendants who include Born Free USA/Animal Protection Institute, Fund for Animals, Animal Welfare Institute, and the American Society for Prevention of Cruelty to Animals (ASPCA) as reported by USSA in early June.

Except for ASPCA, each of the codefendants also had their rating revoked.

"Charity Navigator explains on their site that they take no position on the allegations made or issued by third parties. They follow that with “However, Charity Navigator has determined that the nature of this/these issue(s) warrants making this information available so that donors may determine for themselves whether such information is relevant to their decision whether to contribute to this organization.”

“I think the donor advisory issued for HSUS and the other groups by Charity Navigator speaks for itself,” said Nick Pinizzotto, USSA president and CEO. “Our focus is maintaining USSA Foundation as a first-class organization and our four star rating, which we know gives our supporters tremendous confidence in our work.”

"While HSUS and others have fallen on the Charity Navigator scale, USSA Foundation recently earned the coveted four star rating from the organization."