Dog-Sense For All Dog Owners

How does the sticky cobweb of politics, money, Pepsi, the NFL, Michael Vick, Pit Bulls, APHIS, IRS, USDA, HSUS and AKC affect YOU and the sport of purebred dogs! In 2013 Joe Cartright shared some real eye-openers, even for those of us who know that HSUS operates no shelters and spends less than 1% on helping animals. In the months following, we saw the APHIS Breeder Regulations passed by Sarah Conant, APHIS Director and HSUS ally.{1}

Cartright starts with this example “The Humane Society of the United States (HSUS) released a video of alleged abuse of Tennessee Walking horses in March of 2012. Significantly, that video was produced a year before the alleged abuse it documented.”  There’s a reason why no Pepsi products were served at that huge Celebration SHOW for Tennessee Walking Horses. Cartright starts with horses but we will follow the HSUS influence right through to your AKC and Federal government.

Pepsi’s Marketing Director, Richard Kaplan, gave $5000.00 to the Humane Society Legislative fund (HSLF) a Lobbying Group. Wayne Pacelle, CEO and President of HSUS, is also the HSLF Executive Vice President. Not only did Mr. Kaplan of Pepsi give to the HSLF, so did his wife Peggy Kokernot Kaplan, who is on the Board of Directors of the Humane Society of the United States’ National Council.

Not hard to see why Cartright says “In March, the very same month the video by HSUS was released, Pepsi removed itself from sponsoring the Tennessee Walking Horse Celebration in Chattanooga Tennessee.” Obviously Pepsi could not be associated with any group that came under fire by HSUS. According to sources, “On December 23, 2010 Pepsi granted $250,000 to HSUS even though in the official application guidelines, it strictly states that applications cannot to any degree ‘challenge, lobby for or seek to change current laws, or enact any new laws.’”

Pepsi MAX also teamed up with the National Football League (NFL) and the NFL Players, Inc. to allow fans to vote for the Pepsi MAX NFL Rookie of the Week during the 2012 NFL season. Does Pepsi also support Michael Vick, the player whom President Obama praised the Philadelphia Eagles for giving a second chance? Michael Vick is the football star who only served 21 months in federal prison for brutalizing and killing pit bulls while engaged in an interstate dog fighting ring. He was not suspended from AKC but perhaps he didn’t register his pit bulls with AKC. Cartright reports “HSUS hired Michael Vick and placed him in a position to teach school children about dogs.” and dog owners shuddered at Vick’s TV commercials for HSUS.

Where does HSUS get so much money with which to persuade power? One example comes easily to mind. In 2009, TheDogPress reported Ted Paul used his credentials as an AKC judge, dog breeder, and collie club official when he testified on behalf of Oregon Animal Rights law.  According to the Humane Society Of The U.S. website, "Beverly and Ted Paul have been animal activists and supporters of The HSUS and The Fund for Animals for more than 40 years."

One of our readers dug out the page that features an interview with Ted Paul in which he said that he had bequeathed his entire (and substantial) estate to HSUS. So it is not just $39 per month donations drafted from the checking accounts of millions of Americans that support the HSUS $100,000,000 per year budget as of 2009.

The HSUS connection with USDA gives the Humane Society Of The U.S. yet another tool with which to control dog breeders. Make no mistake, it isn’t puppy mills (renamed “commercial breeders” by AKC) that USDA seeks to regulate into obscurity. No indeed! It is the hobby and show breeders HSUS intends to sterilize!

Why? Because many private breeders only have a litter every few years when they breed to keep something for their next generation of show dogs. The other puppies in the litter are often given away to friends and family and those that are sold are rarely reported to IRS. Frank Losey’s research on HSUS and Internal Revenue Service reveals a friendly relationship which translates into recovering billions in lost/unreported/under-reported tax from hobby breeders.

But as you are about to learn, from a symbiotic government relationship, the HSUS-USDA connection becomes an outrageous “business” advantage between a powerful government agency and a questionable non-profit corporation . Cartright reports “USDA secretary Tom Vilsack hired Sarah L. Conant, the HSUS lawyer, as director of (APHIS) Animal Plant Health Inspection Service enforcement.” This unhealthy collusion did not escape the notice of Congress, but to no avail, which in itself, validates the charges of corruption. 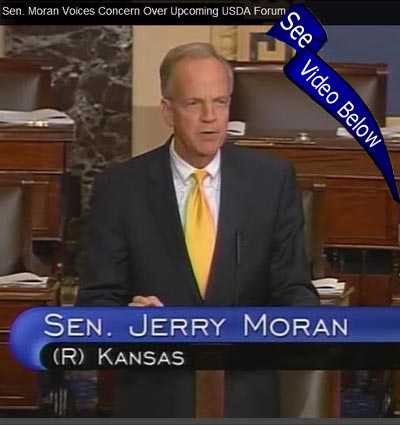 TheDogPress provides video wherein Senator Moran, addressing the House, says “USDA spending taxpayer dollars … to provide the Humane Society Of The United States a public forum to espouse its anti-agriculture views… APHIS representatives believe that the Human Society’s intent is to promote and position the organization to be recognized nationally as influencing APHIS policy on critical and sensitive issue…” 6-minute video below.

Condensing Cartright’s dissertation on dirty politics brings us back to HSUS through Secretary of Agriculture Tom Vilsack who supports the “Pickens Plan For Sustainable Energy”.  Cartwright explains T. Boone Pickens, Billionaire chairman of BP Capital LLC, has spent more than $70 million … lobbying for a congressional bill that would make trucking companies run on natural gas instead of gasoline, a move that would provide a boost to his investment in Clean Fuels Energy, which provides natural gas as alternative fuel to vehicles, and runs fueling stations.

What does USDA, Pickens and wild horse have to do with HSUS? The Ruby Pipeline, a gigantic project to transport natural gas from Wyoming to Oregon while slices through five separate [horse] herd areas… one of the largest users of the pipeline will be BP [owner T. Boone Pickens]. In 2017 we saw the camp-in to protest the Dakota pipeline.  Who will profit from that?

Cartright then ties it all together, “So how does Mr. Pickens propose to get his plan going with wild horse herds getting in the way? He sends out his wife, Madeleine Pickens, to form a non-profit “Saving America’s Mustangs” which is “a strong ally of The Humane Society of the United States.”

Mrs. Pickens acquires 14,000 acres in NE Nevada (for the “Horse Sanctuary”) and getting double the bang for the buck, she wants to buy additional water rights for her “eco-sanctuary.” Digging deeper, Cartright says “If water is the new oil, T. Boone Pickens is a modern-day John D. Rockefeller. Pickens owns more water than any other individual in the U.S. and is looking to control even more. He hopes to sell the water he already has, some 65 billion gallons a year, to Dallas, transporting it over 250 miles, 11 counties, and about 650 tracts of private property.”

HSUS applauds and supports Picken’s efforts to acquire all that land (and water) for a horse sanctuary. April 20, 2012 “The HSUS praises the BLM for its decision to support philanthropist and wild horse advocate Madeleine Pickens’ proposal to create an eco-sanctuary for America’s mustangs.” 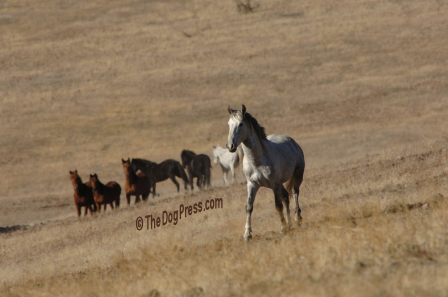 Using a horse sanctuary to get water rights is peanuts compared to something else Cartright found; HSUS $$$ and the Bureau Of Land Management. “The HSUS is currently working in partnership with the BLM on a landmark study, financed by a grant from the Annenberg Foundation [$327,000 in 2010] designed to determine the efficacy and cost-benefits of using the immunocontraception vaccine commonly known as porcine zona pellucida (PZP) to manage wild horse and burro populations on the range. PZP was recently registered by the Environmental Protection Agency under the brand name ZonaStat-H for this use.”

Cartright observes PZP is owned by the HSUS, registered as a pesticide, and that the HSUS makes money from the application. PZP contraceptive research{2} and applications are funded by the Bureau of Land Management, U.S. Navy, the National Institutes of Health, and the U.S. Department of Commerce etc. To stop the BLM from castrating horses instead of using PZP, conservationists and wild horse activists are suing the United States’ government over its plans to castrate hundreds of horses in eastern Nevada, hoping to block the implementation of a precedent-setting plan to regulate wild-horse populations.

“The Sierra Club is a well-known environmental - political lobbying group. Michael Brune, executive director of the Sierra Club and Wayne Pacelle, HSUS CEO and President, have worked together on many issues including Prop.2 , hen cages in CA and now it appears they worked together against the Tennessee Walking Horse industry to promote Eric Stewart into the U.S. House seat for District 4 in Tennessee.”

Remember we started with the current HSUS grudge against the Tennessee Walking Horse? On August 22, 2012, U.S. Rep. Scott DesJarlais requested a meeting with Tom Vilsack, who had hired HSUS lawyer Sarah L. Conant as director of APHIS, which is USDA’s Animal Plant Health Inspection Service enforcement. We can only presume that meeting went nowhere. Perhaps Vilsack thought the Senator wanted to talk about HSUS involvement with the horses, his hiring practices, or Mrs. Vilsack.

On May 16, 2012, the (Humane Society Of The U.S.) HSLF showed a disbursement of $1000.00 to the Christie Vilsack campaign in Iowa. Again, credit to Cartright who states Christie Vilsack announced that she did not accept the funds from HSLF. However, he says nowhere in the HSLF FEC filings does it show a return of the money from Christie Vilsack. As an added bonus, her husband Tom Vilsack, the Secretary of Agriculture, is working on her campaign.

Also donating money to Mrs. Vilsack’s campaign are many USDA employees according to her FEC Filing for the Christine Vilsack for Congress Campaign. Significantly, HSLF is said to have spent over $550,000.00 to defeat Christie Vilsack’s opponent, Steve King, who has been very outspoken about the lies that HSUS spreads.

If you’ve ever wondered where animal rights groups get funding, read the investigative piece on The Tides Foundation (below).

TheDogPress.com thanks Joe Cartright and other concerned citizens who provided information and research.

Mine for Gold in these Reference Links and Related HSUS Information: