First, how do you know you have Lyme Disease before permanent damage occurs and just as critical, is there a Lyme Disease test to show that you are cured?

A subscriber reported she had contracted Lyme Disease from tick bites. Her dogs are fine but she is not. She wanted us to warn other pet owners about what can happen. 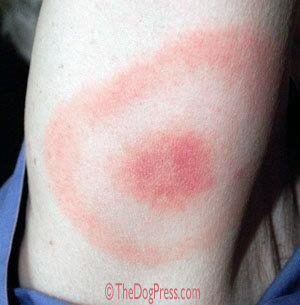 When we read her story we agreed that there's a lot more to Lyme Disease than previously thought. First, exposure. She said her grounds are regularly "manicured" and there's no bushes or trees. Her smooth coated dogs are immaculate, no sign of a tick. The only way she could have contracted the disease is by tick bite so she has wracked her brain about how she could have been exposed. That may forever be a mystery and is in itself is a warning!

Her first symptom was itching, then within a few days, red welts appeared on her torso, the calf of one leg and thigh on the other leg. She used a common itch cream, then a cortisone cream but by the end of the week, each of the five "itchy places" had formed a raised center with a red "bulls eye" ring.

Suddenly her symptoms made sense. It looked like the photos she had seen of Lyme Disease! She went online and found tons of information, including several articles at TheDogPlace.org. She went to the CDC and other government sites and sent the following excerpts with the suggestion that we add it to our existing information on Lyme Disease and Lyme vaccine.

"Lyme disease is a leading tick-borne multisystemic disease caused by the spirochete Borrelia burgdorferi. The bacterium is transmitted by Ixodes ticks, which could feed on white-footed mice, rodents, deer, and birds [1, 2]. In the United States, there are approximately 300,000 people diagnosed with Lyme disease each year [3]. The frontline treatment for Lyme disease is antibiotics such as doxycycline for adults and amoxicillin for children [4–8]. These antibiotics are found effective in most cases of patients diagnosed with Lyme disease [5–8]. However, according to the Centers for Disease Control (CDC), approximately 10–20% of the Lyme disease patients treated with anti-biotics for a recommended 2 to 4 weeks experienced symptoms of fatigue, pain or joint and muscle aches [9]. In some patients, the symptoms even lasted for more than 6 months [9]. This condition was termed as “post-treatment Lyme disease syndrome (PTLDS)” or “chronic Lyme disease” [9]. http://www.ncbi.nlm.nih.gov/pmc/articles/PMC4681354/ 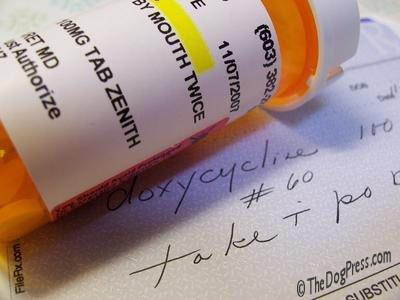 Her family doctor referred her to a dermatologist when she was still having symptoms after antibiotics. The dermatologist put her on another round of doxycycline but one of the concerns she shared with our staff is this:

Previous in vivo studies on mice, dogs, and nonhuman primates have shown that B. burgdorferi could not be fully eliminated by various antibiotics such as doxycycline, ceftriaxone, and tigecycline.

She emailed days of research and asked that we share it with dog owners but to withhold her name. We readily agreed, because, like everyone else, our staff thought the Lyme Disease medication worked. I called her, we talked, and among other things, agreed to apologize for saying Lymes was an overblown problem designed to push vaccines. Obviously, we were wrong. We are grateful for the opportunity to present more information on Lyme Disease.

Some of the photos she sent show that the typical bulls eye can also present as a rash or a cluster of small spots. One website called it "insidiously deceptive" in appearance and attack methods! Indeed, Lyme Disease can change form when challenged by "antibiotic exposure, and/or even an attack from the immune system". What can make it so damaging to the nervous system is the ability to hide in different forms that actually protects it from antibiotics until it comes out of hiding to attack again!

She included this disturbing comment from one of the doctor sites.

"Elimination of pathogenic bacteria in their biofilm form is very challenging since these sessile bacterial cells can endure the host immune responses and are much less susceptible to antibiotics or any other biocides. Studies have also showed that doxycycline and amoxicillin could eliminate the spirochetal form of B. burgdorferi, but the dormant persisters/biofilm-like aggregates/microcolonies were not susceptible to these antibiotics [7, 31]. Therefore, there is an urgent need to find effective agents, which can target/eliminate all the morphological forms of Borrelia. 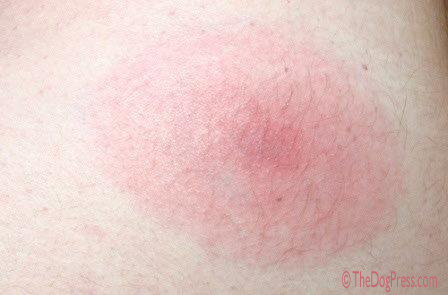 That's where, you guessed it, nature steps in. We've told readers about the amazing balance between sickness-and-cure. If a bad bug evolves naturally (we're not talking about test-tube creations here) nature provides something to get rid of or cure it. Primitive peoples have always known this which is why they have been able to survive BP (before prescriptions). It is also why your dog seeks out a particular kind of grass, weed or dirt for whatever ails him.

One of our best writer-researchers is checking out stevia (yep, the sweetener) and other natural cures because she says Lyme Disease can go “dormant” and then come back again and again. How many doctors will tell a patient that?

This editor is a big believer that a significant coincidence always has meaning. The lady mentioned a vaccine article we had published on Lyme Disease causing aggression. I looked it up and will have the media department include it in the visual display. I was also reminded of the expose we did on Plum Island and Lyme Disease. Did you know Lyme Disease was a government-created weapon of war? We do now. And we know it can cause unwarranted, unprovoked aggression. TheDogPress.com covered aggressive behavior as a side effect of Lyme Disease but we now know there’s more to that story.

Read Dr. Jordan's article on how doctors fail to diagnose this infectious disease and that they often fail to follow up to be sure the patient (human or canine) is cleared!!!