TheDogPlace.org repeatedly warns against using Dursban flea and tick control or Roundup™ weed killer on the lawn your children and dogs play on, 2018 case proves… 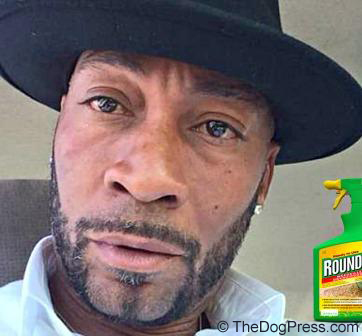 Chemical giant Monsanto has been ordered to pay $289 million in damages to Dewayne Johnson, a school groundskeeper pictured here.  He applied the weed killer up to 30 times per year. Reuters news service released this on the wires August 10, 2018 but you won’t read much about it. Why? Because mainstream news centers risk significant advertising losses by reporting this cancer-causing cover up.

The landmark pesticide case proves what TheDogPlace.org has warned about for nearly two decades! This marks the first settlement for claims that glyphosate in Roundup™ and Ranger Pro™ causes cancer. A San Francisco jury took only three days to reach a verdict. Doctors say the plaintiff may not live another two years, but Dewayne Johnson will live forever in legal annals and pesticide citations.

No one knows exactly what the formulation is in Roundup or flea and tick control pesticides (it is called “confidential business” information) but Mr. Johnson and his attorney Brent Wisner will be forever known for their bravery in seeing this case to conclusion.

To date there are over 5,000 cases filed against Monsanto, a unit of Bayer Corporation. There will be many more lawsuits filed after this precedent-setting case. If you think this doesn’t affect you, your family, and your pets, think about this. Monsanto is into gene-splicing. See the gross photo (below) of a genetically modified bull but first get your head around this – “A glyphosate (the herbicide in Round Up) is spliced into genes of the seed so that farmers can continue to spray the crops with herbicides and pesticides without killing the food crop.”

Monsanto said it would appeal, issuing this statement “Today’s decision does not change the fact that more than 800 scientific studies and reviews...support the fact that glyphosate does not cause cancer…” The pesticide giants continue to deny that glyphosate causes cancer stating “decades of scientific studies have shown the chemical to be safe for human use.” Who paid for those studies is a moot point…

TheDogPlace.org exposed the Roundup risk in normal gardening and lawn care use but it is unthinkable to use it to “drench the wheat fields with Roundup several days before the combine harvesters work through the fields as withered, dead wheat plants are less taxing on the farm equipment and allows for an earlier, easier and bigger harvest.” That was in 2014, see the full story in “Roundup kills”. {Ref 1 - Roundup}

TheDogPress has learned that food producers are also changing the DNA in plant species and animals to make them bigger, easier to grow, and therefore more profitable{Ref 2 - GMO Food}. Over 1.2 million subscribers now know about genetically modified organisms and demand non-GMO food stamps.

The international Agency for research on cancer classified glyco phosphate glyphosate as a human carcinogen, i.e. cancer-causing substance. Wheat farmers know that but many continue the practice of killing the wheat plants because the dead (dry) plants are easier to harvest without damage to the big combines.

The chief of the national toxicology program laboratory, Mike DeVito tells us “the formulations are much more toxic. The formulations were killing the cell. Glyco phosphate really didn't do it.”

He says "the government must do more testing on glide phosphate to see how it affects food.

There are currently over 4,000 lawsuits against Monsanto alleging that people developed cancer after using Roundup.

That should prove interesting because no one knows exactly what the formulation in Roundup is, it is called confidential business".

ALERT: March 2019 lawsuits in the news as Monsanto, maker of Roundup taken to court again. Send this along to family members.