Two more fatal case reports as profit takes priority in veterinary medicine. These owners lost their dog to the pain-killer drug Rimadyl and settled a lawsuit with the veterinary pharmaceutical giant, Pfizer.

The Cooper’s dog was treated for a cruciate ligament (knee) injury. Cruciate ligament injury is typically associated with football players and other athletes who endure repeated strain on the largest weight-bearing joint in the human body. Animals with four weight-bearing legs have an advantage but it didn’t help Sophie.

Cranial cruciate ligament rupture is uncommon in active canines in proper weight and condition but age, obesity and/or limited exercise raises the odds of orthopedic problems, from spinal to hips, elbows and of course, knees.

The Coopers took Sophie to a veterinary practice in Longmont, CO where surgery was performed on her knee and she was apparently given several medications, including Rimadyl.

Recovery seemed to be going well when over a week later she developed symptoms commonly described as “Rimadyl toxicity.” The dog was taken back to what one report characterized as “corporate vets.” To experienced dog owners, this is significant because it appears that Sophie was by then, either desperately ill or hospitalization was a corporate “profit” decision.

In any event, “she was hospitalized for 13 days” and her suffering continued after she was released. It was finally determined that the helpless dog was suffering from liver failure. A dog requiring that much Rimadyl indicates a problem with the surgery itself or poor judgment after the fact, especially when one considers the known liver toxicity of such medication.

TheDogPlace.org has covered the fatal side effects and Rimadyl Settlements

{1} and so the risk should have been known by the corporate vets. Sophie died in July 2009. Smith and Cooper sued Pfizer, the maker of Rimadyl. A settlement was reached in 2013.  All dog owners should be grateful to the owners for their persistence.

This is but one of many settlements for Death by Prescription, leaving one to assume profit and the benefit of the anti-inflammatory drug outweighs the number of animal deaths it has caused. The amount of human suffering, expense, and grief is incalculable.

You should also know prescription drugs are the 5th leading cause of human deaths. See Veterinary Stats below. But it doesn’t end there.

The following report was received from Jean whom many dog owners know by her tag line (Always for George - Always for the Rimadyl Dogs). Jean lost her beloved dog to Rimadyl and in his name became a guardian of all dogs. 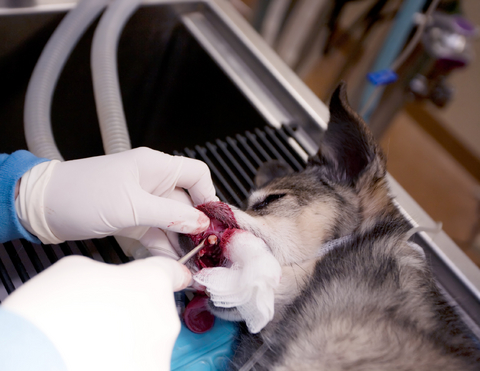 Veterinary hospital owner Edward Verville and licensed veterinarian David Howard of Carolina Forest Veterinary Hospital allowed an unlicensed assistant, Brian Ling, to perform surgeries on animals. Note use of the plural form. This was not a one-time incident.

In one case, the dog died but the result of state law violation was only a public reprimand from the state Board of Veterinary Medical Examiners. You might want to ask your own veterinarian WHO actually does tooth scaling and other procedures.  Then ask is that person state licensed?

Another tragedy occurred when a German Shepherd died following a dental procedure performed by a non-vet. Owners Mike and Eileen Ott filed the complaint which began when they took Molly in for a regular check up. They say the vet stated “Molly was in good health, but needed a tooth pulled.” He then introduced them to the clinic's "dental guy", Brian Ling, whom they assumed was a licensed vet.

Carolina Live TV reports that Ling told the owner there were surgical problems and that Molly needed to take a drug called Novox to heal. The dog failed to recover even though the owners repeatedly took Molly back to the veterinary hospital.

Finally they sought a second opinion. The Otts were told the side effects from the Novox were slowly killing Molly. They stopped the medication but it was too late. Six weeks after the dental surgery, Molly died at the family's home.

The veterinary hospital owner says they weren’t responsible for the dog’s death, stating she was old and had cancer. The report doesn’t mention whether records show any notation to that effect. Nor was it mentioned during the repeated trips the Otts say they made back to Carolina Forest Veterinary Hospital before they finally sought a second opinion.

Have you had a similar experience? What was the outcome? How often do our dogs face such risks and how easy is it for an unethical vet to cover up the truth? Owners need answers and this survey can help.

If you have had a dog seriously damaged or lost a dog to what you believe is veterinary negligence or malpractice, email the Editor.

Dig for GOLD with these informative links