Dog-Sense For All Dog Owners

Is your dog strangely like a previous dog?  Is he weirdly perceptive?  Is it just a primitive brain-center connection or is he your spirit dog?

I was talking to the CEO of a human supplement company when he suddenly blurted out a question that was heavy on his mind. “Can a dog you’ve had a long time come back in the form of a new dog?”  In the awkward silence that followed, I said “Absolutely. Many dog handlers, judges, and breeders say exactly that.” Putting his question on a professional level made it acceptable for him to venture forward. He went into more detail about his old dog and the eerily familiar behavior of his new dog. 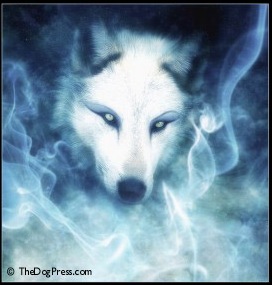 Some people, like that man of science, try to shrug it off as just a silly feeling. For others, it can be unsettling, even frightening. Our ancestors knew the spirit world but we don’t expect to encounter it in the 21st century!

We here at TheDogPress.com believe it is not an uncommon phenomenon and we want people to be comforted by the experience.

Animal spirit contact is not to be confused with séance or religious experience. A spirit guide experience can happen to anyone, almost always unexpectedly. Such contact may happen only once in a lifetime, or the phenomenon can expand to include a very keen perception of Signs and Symbols, see below.

The business executive confided that he was still uneasy about his experience so I told him about my first heart-dog and what happened after he died.  Sachmo (Ch. Okii Yubi’s Sachmo Of Makoto, ROMXP) was bought as a puppy. From the beginning, he was different.  He seemed to be scrutinizing us, making some kind of decision. This is not to be confused with shyness or being in a strange place. Not at all. He was totally confident. It was the highest flattery when finally, he accepted our love. 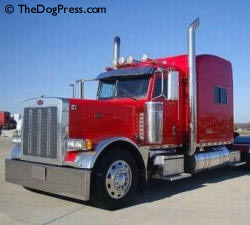 Bill was an independent trucker.  When he agreed to take me on the road for a few trips, his parents were overjoyed to have the kids for the summer but NOT a 5 months old Akita pup.  So Sachmo rode shotgun and I learned to drive the big rig.  This was in the 70s when there were still real truck stops and CBs soon spread the story of “the bear in the Peterbilt.”

The legend began one night in Abilene when two drivers burst into the restaurant yelling “Who’s got the red Peterbilt with a bear in it?” We ran out to the truck where a crowd had gathered. A would-be thief had opened the driver's door. He was long gone but his blood was still there and no one else had dared come close enough to shut the door.

Sachmo sat calmly in the driver’s seat, figuratively and literally.

The dog was different and everyone sensed it. There were very few judges who denied him in the breed ring. In the Group ring he stood behind only the German Shepherd Dog, Doberman, and Dane. Some judges were annoyed at that presumptuousness, some smiled, but not one ever ordered the Akita back to the end of the line where "new" breeds always went. Sachmo exuded a presence that most people (and all dogs) recognized. It had nothing to do with show standards but ask any Working Group judge of the 70s. They will remember him.

Sachmo was barely 7 years when he suddenly bled out from an unsuspected hemangiosarcoma. We buried him in his favorite place and I went into deep depression.

Two weeks later, Cheryl Garren, the only person other than Bill who had known Sachmo’s affection, screeched into our driveway and burst in to the den. “What’s wrong?” I asked.

“Shut up and listen” was her agitated reply.  “I’m on my lunch break. Here, take these” and she handed me a dozen yellow roses. Before I could respond she said “Sachmo sent them. I had to go way out of the way to the florist, I’ll be late getting back to work…”

She stopped, took a deep breath and then said “BJ that damned dog kept me awake all night. Every time I dozed off he jabbed me.” Tears flowed as she continued “Finally I might have dozed off, maybe I dreamed this, I don’t know but I saw him. BJ, he was magnificent, standing on a ledge. I could see the wind ruffle his coat. He never looked my way, just said to bring you yellow roses, that you would know what it meant, and to tell you that he was okay and he would always watch over you.”

Cheryl sat down next to my desk and our tears flowed together. Finally she said “He didn’t say it in words but I heard them. Oh BJ, it was awful. I sat up in bed and I went over and over it. I wanted to call you but I knew that wasn’t what he wanted. I went to work but couldn’t concentrate. Finally I gave up, no matter how crazy it was, I had to go get the roses and come here.”

She nodded at the bouquet I held, forgotten. “Does it mean anything to you?”

I glanced down at the tiny buds unfolding into new life. I couldn’t talk about my grandmother, couldn't say what yellow roses meant to her.  I just nodded.

“Ok, later. I have to get back to work…” I made no move to walk out with her. I sat quietly, waiting for Sachmo to come to me. He didn’t. I was hurt, confused. I must have sat there for hours until my husband came home. I told him what happened. He said nothing but when he put his arms around me, I could swear, my dog was suddenly there with us.

Do you have a spirit dog in your life?

One that, of all the dogs since you were a kid, seemed to communicate with you on a different level? Perhaps it was just a fleeting moment when an ordinary dog telegraphed a warning or comforted you in a way no human had ever done.  I risk sharing this publicly because doing these websites has taught me that "dog people" are different and some of you will understand.

Signs and Symbols further convinced me how little we know compared to "primitive" cultures. Over the past 5 years, many deny or have lost touch with our past powers.

Let us know if you have had a Spirit Dog experience and read what other's had to say.