What can you do to protect your family and pets from the "nightmare bacteria" discovered in PA, a new deadly E. Coli the news networks warn is worse than MRSA?

Fox News characterized it as "A long-dreaded superbug" and NBC headlined it as "Nightmare Bacteria" found in the U.S. for the first time. Doctors are perplexed as they try different antibiotics in a case rivaling the complexities of MRSA (methicillin-resistant Staphylococcus aureus). They tried to keep it quiet but a 49-year-old woman hospitalized in Pennsylvania showed the presence of a rare kind of E. coli infection, the first known case of its kind in the United States. 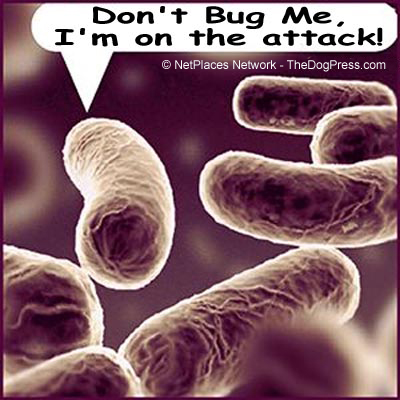 Several subscribers emailed when the 2016 story broke online. One owner said "can my dog pass it to my children? He tracks in dirt and God knows what else!"

Good question! We set to work getting answers for readers. A report from the UK says that the superbugs could kill more than 10 million people per year. Our editor chimed in, saying she watched "the doctors" on Fox News in late June and Dr. Siegel said that we're already at more than 700,000 deaths per year tied to antibiotics. Huh? I looked at Denise and she shrugged but her eyes were big as saucers.

We went to Fox News and sure enough, Dr. Marc Siegel says the cause of antibiotic-resistant superbugs is that we are feeding antibiotics to feedlot animals on a regular basis. Dennis remembered something in TheDogPress about regulations against growth hormones {1} and antibiotics in slaughter animals because of the pass-through to people.

Dr. Siegel says the FDA veterinarians are warning people not to give the antibiotics to their pets unless an animal is really sick. He also says that we need to be able to tell the difference between a bacteria and a virus because some doctors are giving out antibiotics knowing they have no effect on viruses. BJ said that is done in veterinary medicine "… to pacify the owner and pad the bill but pet owners are willing to pay so they can feel like they got something tangible for their dog. "

One article said "the development of new antibiotics has stalled due to no incentive on the drug companies." Dennis observed the drug companies are making plenty of money on all the medicines that keeps interrupting his football basketball games! We all laughed but then realized it wasn't that funny.

NBC News said the "drug-resistant super bug" showed up in Pennsylvania and was identified as a strain of E coli by a team at the Walter Reed Army Institute for Research. Here's the scary thing. It seems a lady carried a gene called "mcr-1", something about finding it in her urine and this mcr-1 gene has turned her ordinary bacteria into the superbugs. So dog breeders will get this - the problem isn't just that you can catch the superbug, what scientists are really worried about is the gene that made the E. coli drug-resistant.

And here's the weird thing, this mcr-1 gene is passed from one bacteria to another. It sits on something called a plasmid and that makes it easy for one kind of bacteria to give it to some other species of bacteria. That means big trouble because we're running out of antibiotics that work and bugs are developing an immunity to things like penicillin.

Okay, so what can you do to protect yourself, your pets, and your family? Denise said "We've got all kinds of herbal stuff in TheDogPlace.org" and that she plants more than catnip for her Bengal cats. Sure enough, we went back to Google and learned that there are tons of natural herbal preparations that have been effective medicines for centuries. Will any of them cure you from the superbug? Who knows?

Could it be that a dog that will find the plant that can kill the superbug? Everyone laughed but hey, they do use dogs to sniff out cancer so what's funny about training dogs to find new plants they can make medicine with?

In the meantime, we live with our dogs and or cats and we love them. Sure we hug them and they kiss us with the same tongue they just licked their feet with (or a smelly old bone they won't give up). So yeah, they transfer germs to us and probably vice-versa. But don't let the scare-mongers blame this on our pets. The crazies are already saying pets carry the superbug and some nutcase on facebook said she took her dog to the pound!

Dog ownership information brought to you by