Animal Planet had a show called Man-Eating Zombie Cats. I’m a sucker for anything vampire or zombie, but this canine distemper thing was pretty spooky. 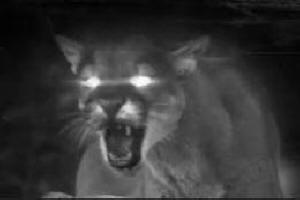 I know its almost Halloween but that show was really scary!  It showed big cats that aren’t afraid of humans because the mutated canine distemper virus makes them lose their natural fear. Nothing like trying to scare the bejesus out of everyone else!

I have a few questions for all the veterinarians that subscribe to TheDogPress.  Can dog diseases really jump from dog to cat? Or is it some kind of similar virus re-created to affect cats and they still call it a canine distemper disease?

I’m finding out that here in America, mountain lions (pumas, cougars) are coming into people’s homes (though the doggie door) and eating their dogs and also attacking people more than ever before, there’s even video.. {1} And in Siberia, they have found tigers wandering aimlessly on major highways, for all the world looking if they’ve been drugged! I can’t help worrying about my house cats.

It’s all blamed on the big cats contracting Canine Distemper Virus. The Huffington Post show went out of its way to show zombie cats (video taken at dusk/dawn so the flash illuminated the eyes (really corny) but ooh… scary. To me, the scary part is, how is a dog disease getting into the big cats? Are they studying our domestic cats?

I always thought Canine Distemper was really nothing to worry about unless you had young puppies. That in the adult dog, it was like a human having a cold/flu, he would get over it once the virus ran its course and that we were just supposed to keep the dog away from other dogs until he was better. I knew it was super contagious, it’s a virus, so that makes sense, but I didn’t think it was fatal to adult dogs.

Researching the virus I found that CDV causes symptoms all over the body, including the gastrointestinal tract, respiratory tract, the brain, and spinal cord. The appearance of symptoms and signs of distemper varies, ranging from very mild illness to death.

The Canine Distemper Symptoms can be:

I noticed a couple of years ago, at a local vet’s office where I live, they had great big posters on their walls advertising Canine Distemper vaccines and I thought to myself then, Oh boy what’s been unleashed now that they are trying to give every dog on the planet a new vaccine? Will it make it better or worse? What will the virus turn into to beat the vaccine? 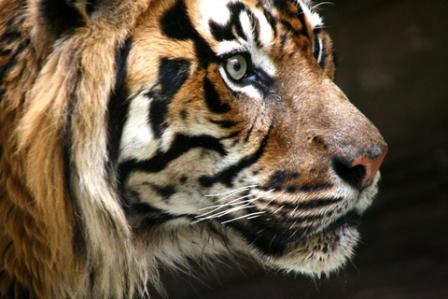 The scientists that spoke as experts on the show say the big cats were probably getting the disease from eating infected dogs. O.K. I’ll buy that but what about the sanctuary cats that have no access to dogs? Oh wait, now they are saying the cats could have gotten it from raccoons. Again, huh? Canine Distemper is in raccoons too? I give up! How is this Canine anything? I went on-line to see how far spread this was and a vet site I went to says the virus can also infect other species including ferrets and wild animals such as coyotes, foxes, wolves, skunks. Pretty sure these aren’t your typical house dogs either.

If they have a vaccine for dogs, why can’t something be done about the rest of the animals that are now carrying something that may or may not make them act like zombies? The actual virus in dogs doesn’t appear to make them insane or dangerous to their owners, so how is it that all these other animals can get Canine Distemper and it turns them into something weird, acting like brain damage. They call it canine distemper virus but has something else been “unleashed” on the public?

And what about all the buzz on zombie rabies? I wish I hadn’t looked for zombie cats, turns out NatGeo has the most finds and some of the scientists made the rabies-brain-zombie connection. They’ve even made movies about rabid zombies and doomsday stuff! Are they preparing us for something really possible or is it all about getting web traffic?

I mean what else is going to jump species? When will they release the first canine distemper virus vaccine for people? If it canine distemper virus can jump to cats, both domestic and wild, are we at risk from our house kitties? I remember the news footage of that guy writhing on the pavement from rabies, they called him a zombie! How long ago was that?