A true story of how one small county solved the problem of impending animal rights, leash laws, license fees, and lovely Miss Ellen.  Use wisely...

An odd thing happened on the way to an Animal Rights agenda in a small southern county. Seems this attractive lady breezed in and quickly began to involve herself in local activities, including politics. 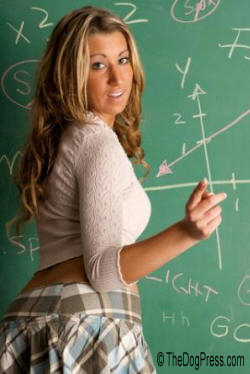 The men thought her to be harmless enough but menopausal homemakers whispered that anyone who attracted attention like insects to a picnic was up to no good. Ellen was seen as green in more ways than one but when she spoke of environmental issues, the younger residents fell in lockstep with her.

Ellen got a teaching job and had hardly got her flowers blooming when there arose an issue that split the community, depending on whether a family worked for the local lumber mill, knew someone who did, or “didn’t know much about it.” Miss Ellen attended town hall meetings, spoke about tree mining which she risquély called raping the land, and explained to the cigar-smoking council how dangerous was the pollution generated by that mill.

She interested a lot of the “under thirty” crowd who attended meetings, concerned about their children breathing the emissions. Over the next couple of meetings, the good folks began to literally take sides; older, long-time residents who had grown up with the mill on one side of the room and young, forward-thinking parents who had more modern jobs and attitudes on the other side.

The debate was abruptly ended when the mill caught fire and although only Johnny Bryan was injured (he tripped over the fire hose and crashed into a barrel of solvent) it suspended mill operations for months. Some employees found temporary jobs, some moved away. The fire chief said it was an accident and that was pretty much that.

It was quiet in the county for about four months. Winter hit hard and folks stayed home except for church and trips to Wal-Mart. Then two new groups sprang up even before the daffodils broke ground. There were articles in the county newspaper about stray dogs being a menace to children and garbage cans. One old man wrote a letter to the editor saying kids and the damn deer were a menace to gardens and why didn’t someone do something about that! No one thought much about it until signs and banners went up saying “property owners against strays”.

No one had a clue what the signs meant but they sure got everyone talking. The local radio show where people called in birthdays and tractors for sale started getting calls about leash laws and property damage and then sure enough, the very next week, Miss Ellen was scheduled as a guest!

Phone lines buzzed as the ladies put the word out and on Thursday, folks were glued to the radio instead of the television. They listened to twenty minutes of Ellen and then started dialing.

Reactions were mixed but the consensus was that Miss Ellen just might be right. Most ladies could remember seeing a stray dog or hearing about shelters crowded with doomed dogs. A lot of them were married to hunters or farmers but still, they conceded that “times were changing” and if dog tags and leash laws would solve the problem and save those poor dogs, it made sense.

Young mothers really got up in arms about stray dogs attacking their children even though no one could remember such a thing ever happening. There was so much talk about pit bulls that the men quit riding their cur dogs in truck beds. The feed store owner sent a letter to the paper stating that wild boars were a whole lot more dangerous to hikers than the “ketch dogs” used to hunt them. Finally, the county said it would “look at the problem” and things quieted down.

It took about six weeks before the dog problem heated up again. By then gardens were well started and folks were a little bored until they heard there was a big to-do between the vets, the animal shelter, council members, coon hunters and dog breeders. It took a lot of calls to sort out who was opposing who. A County Council Meeting Notice went in the newspaper and people made plans to attend.

You should'a been there! Animal rights workers lined up with the vets who vowed to spay, neuter, contain and tax every dog in the county, feral cats too, if they could catch ‘em!

The handful of breeders lined up with hunters and farmers and people who said they weren’t gonna fork over money just because the county commissioners had some crazy idea about getting rich off license fees. The county tax collector stood up and said the administrative cost would have to be added to property taxes. Well!

Someone else said what about people that have dogs but don’t own property and the sheriff’s deputy / animal control officer made the big mistake of saying it could just be added to the vehicle registration fee.

The meeting ended in a near knock-down fight and was rescheduled as non-public. Now that really got the people up in arms. How they got taxed and kept their dogs was going to be secretly decided by those who stood to profit off the deal? No way.

Remember I told you it was a small county? The people come from hardy, resilient, pioneer stock. When times are bad, neighbors pitch in and help each other. Still, they are an independent lot, used to solving their own problems. Everybody pretty much knows everyone else even if they don’t visit much or agree on politics and religion.

Well, seems like Miss Ellen was seen at the Holiday Inn with the County Commissioner himself. Late at night it was. And then while folks were still puzzling it out, him being a family man and all, they were seen together again and this time, it was the wee morning hours when they parted, he in his big truck and her in her little foreign car.

Well! Certain of the ladies took real exception to that. Someone called the radio station owner who was also the Mayor and a close friend of the Commissioner.

Last we heard, Miss Ellen had left town, the spay-neuter-license-leash law had been tabled and everyone lived happily ever after.