How Islamic beliefs are impacting dog owners in Europe and other countries including America, and what it means to you right now. 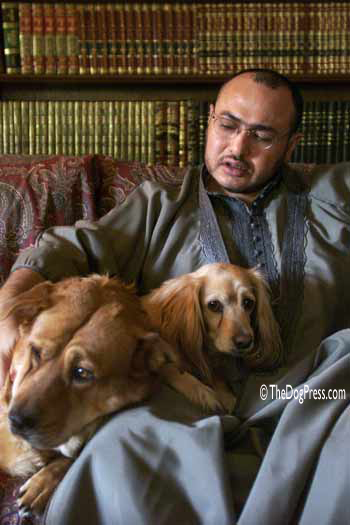 The typical religious Muslim, regardless of sect, observes the ban on touching dogs or allowing them to contact much of what the people do. There are exceptions, though—I have met many dog fanciers in officially-Muslim countries, and they certainly handle their dogs the same as you or I in the West do.

Recently in the international news (but largely ignored by US media) there have been numerous clashes between Muslim purists/extremists and dog owners. In the Netherlands, for example, one Muslim politician called for a ban on dogs in The Hague, the third-largest city in the country. The call to ban dogs represents an attempted encroachment in Europe of Islamic Sharia law.  Islamic tradition holds that dogs are ceremonially unclean and thus spiritually “unclean”.

Muslim attempts to impose Islamic legal or religious beliefs on European society are increasing. The Hague is only one of dozens of such Muslim-canines incidents in Europe. It started when Hasan Küçük, a Turkish-Dutch representative on the city council vehemently opposed a proposal by the Party for the Animals to make the city more dog-friendly.  Küçük argued that keeping dogs as pets is tantamount to animal abuse (this sounds familiar to those who've been watching PETA and HSUS) and called for possession of dogs in the city to be criminalized.

The IslamDemocraten.nl website claims that party is “founded on the Islamic principles of justice, equality and solidarity” but it stretches the imagination to think that banning dogs is congruent with the first two of those principles. City councilman Paul ter Linden, who represents the Dutch Freedom Party, responded by saying: “In this country pet ownership is legal. Whoever disagrees with this should move to another country.” (Go, Paul!) Other Dutch commentators believe Küçük's declarations are provocative, designed to stir up the Muslim population. Muslims make up more than 12% of the city's population and his call for a ban on dogs as ritually unclean is a sure vote-getter.

In Spain, Muslims now make up around 20% of the population of 29,000 in Lérida, Catalonia. Islamic groups there asked local officials to regulate the presence of dogs in public spaces so they do not “offend Muslims.” That would include banning dogs from all forms of public transportation as well as from all areas frequented by Muslim immigrants. They claim that the presence of dogs violates their religious freedom and their right to live according to Islamic principles. Over the past several years since the city government refused to acquiesce, they have experienced a wave of dog poisonings in Lérida, mostly in working class neighborhoods heavily populated by Muslim immigrants. Take your dog for a walk there, and you are harassed by immigrants who are opposed to seeing the animals in public. Muslims have also launched a number of anti-dog campaigns on Islamic websites and blogs based in Spain. There are serious concerns about dog poisonings.

I judge dog shows occasionally in the UK, and have seen a tremendous increase in the numbers and the influence of Muslim immigrants and communities. Second-and third-generation Islamic families generally seem to have what I have called “a very low integration index.”  They seem to fiercely retain cultural clannishness, even if they relax their imported religious orthodoxies. 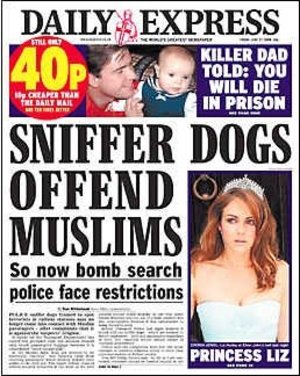 In Britain, where canine controversies seem to outnumber those on the Continent, blind passengers are being ordered off buses or refused taxi rides because Muslim drivers or passengers object to their “unclean” guide dogs. In Reading, for example, one old blind man who was also a cancer sufferer was repeatedly confronted by drivers and told to get off the bus because of his guide dog. He also faced hostility at a hospital and in a supermarket over the animal.

In Nottingham, a Muslim taxi driver refused to carry a blind man because he was accompanied by his guide dog. The taxi driver was later fined £300 ($470US), but that did not deter other such incidents. In Stafford, another Muslim taxi driver refused to carry an elderly blind couple from a grocery store because they were accompanied by their guide dog. In Tunbridge Wells, Kent, a blind man was turned away from an Indian restaurant because the owner said it was against his Muslim beliefs to allow dogs into his establishment.

In London, a bus driver prevented a woman from boarding a bus with her dog because there was a Muslim lady on the bus who “might be upset by the dog.” As the woman attempted to complain, the doors closed and the bus drove away. When a second bus arrived, she again tried to embark, but was banned again, this time because the driver said he was Muslim.

I believe that private-property owners should be able to serve or refuse any customers they decide to, but I also believe that this should not be exercised in government-owned (non-private) enterprises. I feel that if a city wants to accommodate the religious beliefs of public “servants” at the expense of the general public, the administration is deeply in the wrong. If they want to hire observant Muslims, they should increase the number of buses, and mark those restricted ones very clearly. They should increase the number of truly “public” conveyances at the same time.

In Scotland, the Tayside Police Department apologized for featuring a German Shepherd puppy as part of a campaign to publicize its new non-emergency telephone number. The postcards were offensive to many in the city's 3,000-Muslim community. What a difference from when I made a judging (and sightseeing) tour of England, Scotland, Wales, and Ireland years ago!

In Norway, Gry Berg, a blind woman, was consecutively denied entry into four taxis in the center of Oslo because she was accompanied by her guide dog.

Sniffer dogs in Britain trained to spot terrorists at train stations may no longer come into contact with Muslim passengers because it is offensive to their religion.

The Transport Department says animals may only touch passengers' luggage because it is considered “more acceptable.” British Transport Police may use explosives-detection dogs with passengers regardless of faith but handlers are now trained to be more aware of “cultural sensitivities.” Dogs used to search mosques and Muslim homes are now being fitted with leather bootees to cover their paws so that they do not cause offense. Critics say the complaints are examples of Muslims trying to force their rules and morals on British society and that the police should go about their business of protecting the general population.

Meanwhile, Muslim prisoners in Britain are being given fresh clothes and bedding after sniffer dogs search their cells – allowing Islamic law to dictate prison procedures. The dogs have also been banned from touching copies of the Islamic holy book, the Koran, and other religious items. Prisoners are handed special bags to protect the articles.  This reminds me of a judging trip I made in Pakistan, a thoroughly Muslim country. In one family I visited, the older generation avoided contact with their sons' show dogs, and would have had to go through ceremonial washings and prayers if they touched them accidentally. But for them, it was a purely personal decision, and they were neither militant nor desirous of imposing their religious beliefs on anyone else. Not the typical picture of religiously-observant Muslims that is painted by radical Westerners who have not interacted with the non-extremists.

In France, 72-year-old Marie Laforêt, one of the country's most well-known singers and actresses, was summoned to appear in a Paris courtroom to defend herself against charges that a job advertisement she placed discriminated against Muslims. She had placed an ad on an Internet website looking for someone to do some work on her terrace, specifying that “people with allergies or orthodox Muslims” should not apply “due to a small Chihuahua.” She made that stipulation because she believed the Muslim faith held dogs were unclean. The case was taken up by an anti-discrimination group called the Movement against Racism and for Friendship between Peoples (MRAP), which lodged a complaint against Laforêt. Her lawyer said his client “knew that the presence of a dog could conflict with the religious convictions of orthodox Muslims. It was a sign of respect.” But Muslims rejected her defense.

Americans, usually noted for fierce independence, might put up stronger defenses of our liberties but in lands where Muslims make up significant percentages of populations, dog owners (as well as others) will see more and more encroachment into their rights and traditions.