As we age along with our best friends, we need to consider the challenges it brings in caring for our dogs without over-medicating or making detrimental decisions. 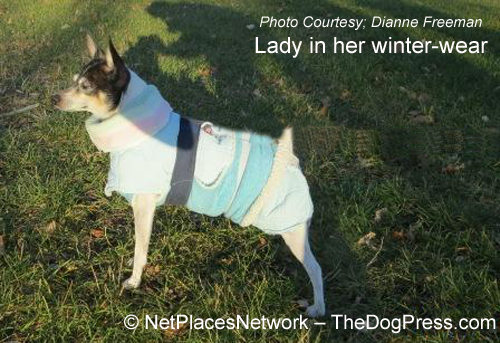 Lady has had issues with false pregnancies and vaginal pus after her estrus cycles. After her last season she also developed three small lumps which we did a fine need aspiration on and they came back benign. One has gone away. The other two lumps are still there, maybe a little bit larger.

I told one of my friends the vet said if the lumps are benign, removing them would prevent them becoming cancerous. She said I might break a leg so perhaps a fortune teller could advise me on which leg to amputate so that wouldn’t happen…

I laughed but told her the recommendation was to also do a total hysterectomy at the same time to possibly prevent reoccurrence of those lumps. I explained that the veterinarian recommendation is to spay her so she doesn't get pyometra. There is something called "stump pyometra" if the uterus isn't completely removed and the vet knows what he is doing.

With that my friend observed “Of course… if you remove the uterus she won't get pyometra and no way can she get uterine cancer.” I said “Oh but…” and she cut me off saying “Diane, she also won't get any more hormones which are made by those organs. That is why when the uterus or testes are removed a good doctor will put a human on bioidentical hormone replacement therapy.”

I discussed this with a couple of other vets that didn’t really want to comment but they did say as for the breast lumps, they never see any because their client dogs are all spayed. I just don’t know what to do.

And if there is high risk for mammary gland cancer then why don’t they remove all of that breast tissue when they spay a dog? Isn’t it better to prevent mammary cancer than to worry about unwanted pregnancy??? I think the answer should be yes.

Right now she is in between seasons, so I need to make a decision. I asked a breeder-friend if she ever had a dog with pyometra. She said “Yes. We treated it to cure it not to prevent any other dog from having it…” Then I asked if a dog feels better if she is spayed at this age? My breeder-friend said “I don't know but there must be a reason they do hormone replacement therapy in humans.”

Well.....these are questions that are hard to find answered on the internet, cause, really, who knows......one dog lives the other dog gets a heart attack or something. I saw that spayed and castrated mammals (including humans) tend to statistically live longer than sexually intact mammals.

My editor pointed out that is because they have no incentive to fight for breeding rights, no reproductive organs to become cancerous, and they don't die from birthing or in defense of their young ones. 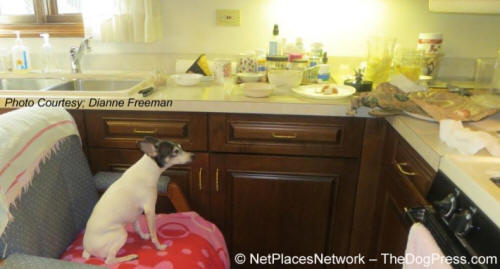 I have always believed in no spay, no vaccines, no commercial food, etc. And now, at ten years old, I think having her operated on would be the wrong decision. The lumps are stable, non-malignant. I watch her for the pyometra and false pregnancies which are sort of routine for her. I have had her go for ultrasounds to make sure everything is okay, so hopefully I would catch the infection and then deal with it, if it were to develop, of course.

I took this photo because Lady loves to cook. Well, not really, because she likes her chicken raw. I watch her weight, exactly 7 pounds and she is still drop-dead gorgeous. Healthy and very much loved. We both thank TheDogPlace.org for presenting such important things that many dog owners don't know or haven't thought about.

My dog loves me and she knows I love her. I have told everyone that if I die before her, take Lady to the vet and have her put to sleep and bring her back and bury her next to Sami, my other heart dog. When I mentioned that to my veterinarian he said to let him take her. That was so sweet but I don't think that would be fair to Lady because her life is really regimented, revolves around her, and I don’t think she would adjust at her age.