Editor's note: Lana is shown teaching organizers for China's first AKC format dog show. Photo Journal Report of nearly fully booked 2005 show, which for China is a first, as they do not make plans for more than 3 months.

I have just judged and also taught (see photo) grooming and handling in Xian and judged their first show in snow and ice.

As you can see from the photos it is snowing like cats and dogs but nobody want to leave until the show is over. 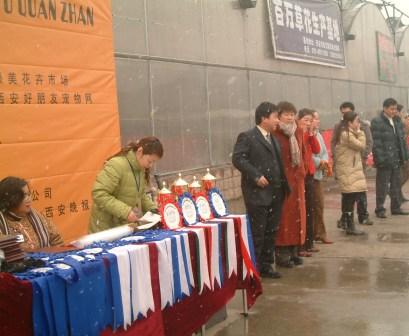 Most of them wait in the snow with no breakfast or lunch - really die hards - until the show is over at 4 pm. 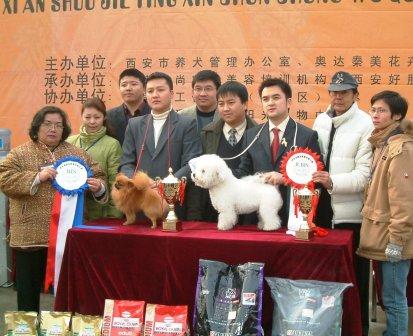 The show is only setup in 3 days and is the first ever dog show with official judges using the AKC system." This photo is of the Best In Show and RBIS winners.  (Lana is at far left, holding BIS ribbon)

Unfortunately, the photos of the Best Puppy, a Shetland sheepdog and Reserve Best Puppy, an American Cocker Spaniel did not take very well. The puppies are much better quality than the adults.

It has been many years since I have saw such good quality in shetlands or cocker but the cocker’s grooming needs a bit more work. 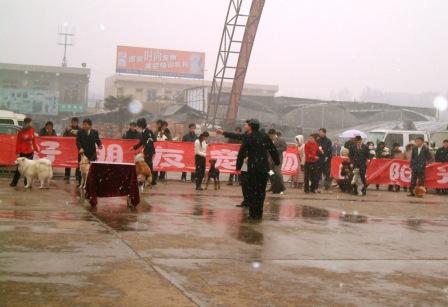 For 3 days show the entry is a good number over 100 dogs plus lots of the dogs were not allowed to enter because they have single testicles or were in season.

With AKC kind of pre-entries, there was still also a queue of last minute entries in the show ring on the day of the show which was all turn down.

Considering it is only a 3 day time and the way things moved and also the snow, the show is a miracle that we all survive pretty well. 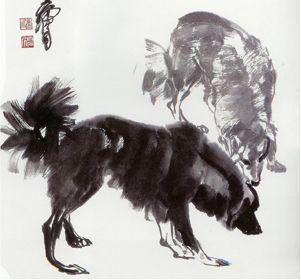 It is also a first which none of the people involved are all green including the ring stewards. Some of them have never been to a show before.

The Design Dept. couldn't resist sharing this exquisite artwork Lana attached. Neither the Artist or Breed was identified but it is very representative of the ancient Chinese Mastiff!!

For much more information on the beginning of Chinese dog shows take the pictorial tours below.  See China early in the 20th Century and think how our relationship has grown since that tenuous first decade.  Now most American imported goods are from China, including dog show ribbons!