Judging in The Land Of Volcanoes was incredible!  Here's an armchair tour of Icelandic Sheepdogs, Iceland's climate, economy, quarantine restrictions, and dog shows! 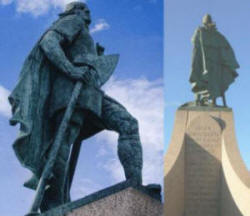 The occasion was the semi-annual national dog show of the kennel club known as Hundaræktunarfélagið íshundar. Ishundar is affiliated with Federación Canina Internacional (the FCI that is headquartered in Spain) and International Kennel Union (IKU). The two recently cooperated to form an association, the “Cyno OneWorld Alliance” of more than 50 countries and still growing. As far as I know, I am the only American licensed by this alliance thus far.

To say that it was a pleasure to judge for this friendly group of fanciers last October would be an understatement. They were very hospitable and everyone had a good time enjoying the friendly competition. I was impressed by the statue of Leifr-Eiricsson and took the photo.

The total entry of the show was down from what was expected, but still enough to keep the sole judge (me) busy for the two day event. It made economic sense to do it this way rather than have a one-day show with multiple judges. And, since Iceland is a country smaller than Ohio, with about 300,000 people (most living in the Reykjavik-Keflavik corner), it makes good sense to bring in foreign judges. Last spring’s show was judged by a Canadian. This fall’s show had a preponderance of smaller breeds, which may also reflect the economy.

Although Iceland has ethnic derivation first from the Norwegian Vikings who discovered the island, and then from the Danes and other Scandinavians, the population also shows some influence from red-haired Irish (some brought as slaves, others arriving as explorers, but all becoming assimilated), a few tall Hollanders, and some from other northern-European areas. Listening to their different language, I hear some words that are nearly the same as German.

The climate belies the name of the country, as there are great sections of pasture, and the remnant of the Gulf Stream keeps it moist and moderate most of the year. It would have made sense for Greenland and Iceland to have exchanged names centuries ago. Both had been colonies of tiny Denmark, but Iceland became independent in 1944, which is surprising, due to Denmark still being under Nazi control at the time. 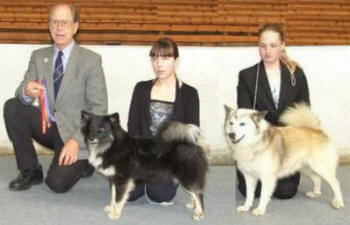 One of the highlights for me was the entry of a number of Icelandic Sheepdogs, their “national breed” - a breed of which I had previously seen only a couple examples. It was a honor, privilege, and pleasure to do this breed in its country of origin. Somewhat related to several other Nordic and Arctic breeds, this is a herding dog that is a little shorter than most Border Collies and Australian Shepherds, but with compact sturdy bodies and good bone. Very suitable for working sheep in this climate. Since there are no predators, the dogs need not be like the Great Pyrenees or German Shepherd Dog, but strong enough to convince stubborn sheep.

In spite of a severe depression (the worst in Europe and possibly the world at this time) caused by a careless banking industry and lack of government safeguards, the tiny Arctic country is slowly recovering. Iceland’s reviving economy is evidenced by most obvious sign- the numerous tourist buses, vans, and oversize-wheel Jeep-type vehicles that line up at hotel doors to load folks going on excursions. But signs of the continuing recession continue, such as the many unemployed and the many unfinished buildings guarded by idle construction cranes. One notable giant is the civic and conference center building, started in 2006, with work just now resuming. Plans are to complete it in 2011. 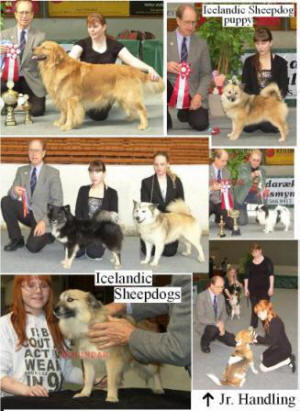 The country is unique in many ways. Icelanders do not burn coal or oil or nuclear fuel for heat, but rely on the abundance of volcanic and geyser activity. Electricity comes from waterfalls, this source of energy coming from ice thawing and descending from glacial mountains. If the country were to switch their automobile use to electric vehicles, there would be nearly zero pollution (already so low that it is not noticed). There is such an abundance of geothermal and waterfall/dam energy, that they don’t feel the need for windmills, despite constant strong wind. Too bad they can’t export that!

I noticed a high percentage of smokers (something I see in China, France, and a few other countries) but I also noticed quite a few joggers in this land of contrasts, this land of cold air and hot springs. The principal economies of Iceland are aluminum mining, fishing (including whaling) and tourism.

The show is run at a slightly more leisurely pace than in many countries or clubs, partly because we judges have to dictate a written, detailed (point by point) critique on each dog, and the scribe apparently does not use shorthand. Some of the items seem unnecessary, especially if there is nothing remarkable about the specific physical characteristic on the checklist.

The only large predators, by the way, ever to have been on this isolated island have been occasional polar bears that rode in on drifting icebergs. Although these have been very rare, and quickly dispatched, Icelanders have a fascination with these fierce visitors, and many shops sport statues and pictures of the great white beasts.

There is a quarantine, as to be expected in an island country that has no endemic rabies. Dogs coming from other rabies-free countries have an easier time getting in. Otherwise, there is a waiting period and a minimum age requirement. Importation is allowed only once a month.