In May of 2011 we warned readers that there was a small but chilling risk of having a dog poisoned by a competitor or a whacko with a grudge.  Within a month of the fatal Borzoi poisoning in the late 80s, the Hoehn’s Top Ten Group Akita, slated for the Florida circuit with Jim Berger (a successful handler-now-judge) was poisoned in late December. The suspect, a competing handler, was never charged because Purdue University was unable isolate the poison believed to have been injected when the dog and handler were in the crush line entering the Group ring.  More on that in a minute. In 1895, 8 Toy dogs, Yorkies, Charlies, and Chins were poisoned at the Westminster Kennel Club dog show.  All 8 dogs died.  The two veterinarians who tried to save them diagnosed the poison as strychnine.  Frenchies were poisoned at the Ladies KC show in 2008 and in March of 2010, PETA was accused of putting antifreeze in water bowls at the Belleville WA shows.

A competitor accused Ralph Ullum of drugging a Siberian Husky at the December 2010 Wheaton KC Show. Handler Jessica Plourde rushed the Siberian Husky to a veterinarian who induced vomiting.  Based on accusations and a pill found in the men's restroom, police charged Ullum with feeding Protonix and possibly Benadryl to the handler's dog.  Ralph Ullum faced a judge and was found INNOCENT, see link below)

Some poisons are difficult to detect

In fact, NatGeo reveals there are 1,200 kinds of poisonous marine organisms, 700 poisonous fish, 400 venomous snakes, 60 poisonous ticks, 75 scorpions, 200 spiders, 750 poisonous plants and even birds whose feathers are toxic when touched or ingested.

Easy-to-obtain poisons like antifreeze are deadly when added to a dog’s drinking water or injected. Purdue University could not determine the substance used to poison the Akita but stated it had to be something that rapidly dissipates.  Potassium chloride (called KCl) does just that and is used as a lethal injection in some states.  Most breeds have a high pain threshold so a quick needle prick while being jostled at the Group entrance would be ignored by a seasoned show dog.

If you show, you should know that the risk of poisoning is higher with a top winning dog.  In fact, there are poisonous people in every sport.  From attempting to cripple an Olympic skater to sabotaging a race car, the risk is there. 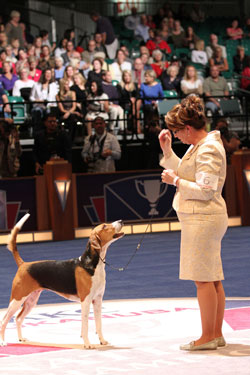 The best phone numbers to call in an emergency is 1-800-222-1222 the National Poison Control Center which will automatically connect to their free service in your state. Depending on who answers, you may get quick, basic information for animal poisoning and it is free, 24-7.

Emergency treatment depends on the type of poison used but it is rare that an owner or handler knows what was given to the dog.  Mustard is usually handy and can induce vomiting but with some poisons, vomiting would be the worst thing to do.

Rather than waste time with inappropriate treatment, look for evidence of any substance that could be poisonous to a dog.  A wrapper, a bottle, a syringe; grab anything suspicious and a friend to drive.  Have show officials page for an on-site veterinarian while you get directions to the closest emergency veterinary service.  Five minutes spent at the show site can save you precious minutes finding the veterinary clinic.

The Koehler method of poison proofing, used to train police and guard dogs, is effective but if you teach a show dog not to take tidbits from strangers, he can't be handed off to someone else to show.  You can however, teach him to alert for a particular form of "bait" when used by a professional. Show dogs are smart.  An hour of repetitive training in short segments, at the show site will train him to ignore unfamiliar "bait" and any food on the ground or not in his bowl. 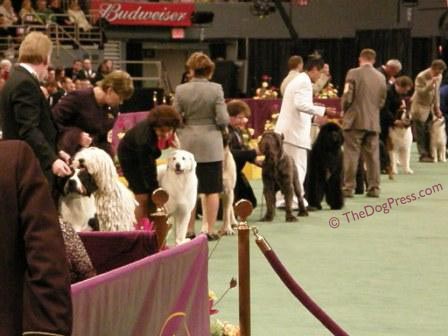 Other methods of protecting your dog include only using clean water or food bowls each time.  Cover his crate with a mesh cover and use a fan if necessary.  Cat exhibitors used to bench in show-provided open wire cages but today's exhibitors use ready-made fine mesh vinyl netting to enclose their decorated benching cages. Plastic mesh would work equally well for dog show crates.

If you use a professional handler, make sure he/she has assistants trained to be alert for any suspicious behavior by visitors to the set-up.  If you owner handle, establish a buddy system with those crated around you so you can watch each other's dogs.  Don't be paranoid, just be watchful.  Don't let bad people ruin good shows.

This article is being updated because as 2016 unfolds, terrorism is a reality.  Animal rights radicals have always been a dog show threat but after the Paris attack and weekly bomb threats, everyone has a heightened sense of danger. TheDogPress has covered some of the Muslim customs as regards dogs.  While many of our greatest show dogs are of Middle-Eastern origin, that doesn't mean that our dogs are safe from radical jihadists.

The February Westminster Dog Show is famous around the world welcomes foreign visitors as does England's Crufts Dog Show in March.  Terrorists are unlikely to poison dogs or attack dog lovers but it would be wise to be alert at such high-profile, crowded venues.

There was a proposal made by one of our writers to require a "pit pass" to the grooming and staging areas of major dog shows.  We think it is a workable idea, it would give exhibitors more elbow room and reduce the risk to our dogs.  Make time to mention to this Westminster officials and officials at other televised, high profile dog shows.  Stay close to your dogs and use crate protection and/or the buddy system to protect your dogs.  Good luck at the shows!