"The Garden" once the most famous dog show in America

The quest for a Westminster ribbon is still there but the 2012 entry, the crowds, and the top dogs may not be. 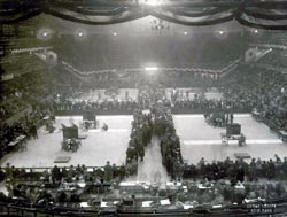 The 2012 entry limit went down from 2500 to 2000 dogs due to renovations which WKC show chair Tom Bradley says are badly needed.  No exhibitor would argue that statement but everyone wishes it didn't have to so adversely impact this year's show.

Handlers will be especially stressed.  Getting to breed rings in different locations will be harder than usual but Group judging will still be in the main arena.  As in 2011, breeds can be groomed at their benching area.  Okay if you're showing one dog or only one breed.

The "Penta" (New York's Hotel Pennsylvania ) is one of the favorite places to be and to find friends.  Right across from the Garden, Jerry Grymek, Doggie Concierge lays out the red carpet but even that famous lobby reflected the low entry.  You can probably get on an elevator or into the green room. 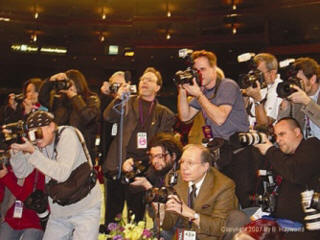 Westminster has always been crowded, even before people could fly in from California.  Was it just "nice" dogs at the breed level or did many of the top dogs stay at home?  Even watching on TV, it was obvious the crowds stayed home.  That was later confirmed by those in attendance and by hotel bookings.

Our native New Yorker contacts said it isn't the economy because local people just grab a cab or the subway.  Valentine's Day came later this year but that would have had little effect since the $75 per dog entry wasn't reached whereas entries usually go over the limit. I remember the year Westminster officials shut down ticket sales along with the benching section.

The Garden could be a death trap due to overcrowding and very difficult exits.  Everyone knows that but the excitement blocks out worries.  We're told however, that more people are becoming concerned about the welfare of their dogs than about that elusive Westminster rosette so it's possible that fear impacted entries and spectator attendance.  Or it could have been the economy, general disinterest, or splitting hairs between Westminster and the AKC Eukanuba National show.  One reporter suggested a less than stellar judging panel which seems a bit unlikely but we'll have more feedback to share with you later. 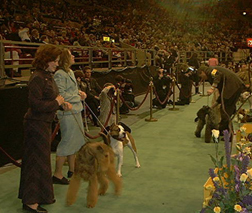 The Group judges did a commendable job and thankfully, each group had at least one well respected dog in the final placings.  Some of the ribbon colors were a little puzzling but ringside judging is fraught with peril and TV judging is even worse!

I will say that I would have covered my bets between Tim's black Standard Poodle and Taffe's Schnauzer.  "Spirit" is classic in outline, free-poses like a painting, but "Yes" on the move was as poodlely as one can ever be.  Her sire, the incredible Ch. Eaton Affirmed was breathtaking on the move as well.  A win for "Yes" would have been an upset to write about but then we already did...

Mamie Gregory's Brussels could easily have won for Lincoln's Birthday which was on Thursday.  That would have given quick-witted David Frei something to quip about.  The crowd loved it when the camera zoomed in so they could see the Brussels oh-so-correct head and expression.  They could have gotten behind him, not that it would have mattered to to the esteemed, second-generation dog lady.  Sari Tietjen does her own thing which is why she always draws a good entry.  Everyone has a fair and equal chance.

The Sussex Spaniel was a bit of a surprise, even to those in the Sporting Group.  He was more game than grand, the breed's trademark tail not very busy but he was indeed "purposeful" and well presented, never missed a step.

We trust Sari's judgment because who, other than a breeder or a judge who sees low-entry dogs from coast to coast would know?  For a breed averaging only 50 to 100 registrations a year, his Best In Show win gives hope to all "low entry" breeds.

Congratulations to all who competed and won.  And to those who came home without a ribbon, we hope to see you next year.

Westminster 2013 moves the the Piers, many other innovations less than welcome.

Westminster 2012 The most famous dog show in America has had its problems.

What's with 2012 Westminster? Entries down. Is it the economy or the panel?

Westminster Kennel Club 2005 Behind the scenes, put faces to names and meet them all!

Westminster Dog Show 2009 Where were the crowds, the top dogs and all the great judges?

Westminster Historical Highlights a sport older than the light bulb and the automobile!