Westminster Kennel Club Dog Show 2017 began a year ago for most dogs, owners, handlers and judges! If you are staying home, see TV schedules below. 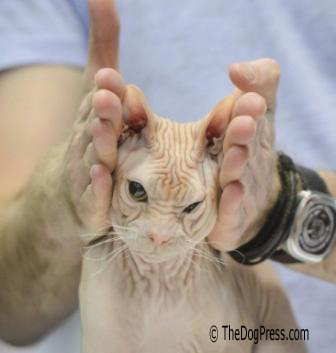 For the first time ever, cats will be seen at the elite dog show in Manhattan.  141 years of dogs-only tradition goes down the tubes as New York City commentators wonder "what could go wrong" with cats at the dog show.  Three years ago someone reported a hairless chubracabra {1} running across the group ring so watch out for purebred cats!

This year the Westminster Kennel Club managers thought it would add a little something extra to have people be able to  "meet and play with hundreds of adorable dogs and fabulous felines while learning about responsible pet ownership."  Many exhibitors have expressed mixed feelings about that idea.  Our staff agrees.  It might ad to the gate $$ but most dog owners and their handlers travel great distances to show off their dogs at Westminster Dog Show and do not want to be upstaged by a weird cat with wrinkles.

Everyone wants to get up close and personal with the dogs and exhibitors but be prepared to get that way with thousands of strangers - and watch your wallet!  The benching sections where the dogs are on display are like a circus midway but with no room to move!

If you are visiting, remember it is the dogs and the people who bring them that make your trip so exciting so make way for them! Don’t touch the white poodle or the Neo unless you ask. Most handlers will say “not now” and continue to try to relax the dogs while surrounded by bedlam.  Actually, some owners may be dozing or reading, which is a sure sign they don’t want to talk.  Others will be only too happy to tell you how wonderful their breed is and show you puppy pictures. Take your business cards and be prepared to save at least a hundred from old friends, strangers, and dog handlers.

If you spot empty seats in the stands right above the breed you want to watch, okay, you can probably get away with sitting there for a few minutes. Unless you have a dog in that ring, don't even think about getting space down on the floor to watch from ringside.  The dog's owners and attendants will be 5 deep.  You really can see more from up in the stands or the walkway but if you are not seated KEEP MOVING!

If you have a seat (or can find an empty) you can see close-up judging on the big screen jumbotron.  If you are just going to watch your dog or your friends from the comfort of your living room, snacks stacked, beverage handy, here is the schedule:

Excuse me for taking editorial license but our phones have been ringing about "Westminster going to the dogs - Mixed Breed dogs!"  With dog show entries down from coast to coast, and dog clubs failing to promote the advantages of selecting a purebred dog wherein one can have a reasonable expectation of size, coat type, grooming requirements, personality and temperament, why would the Westminster Dog Show promoters betray the dog fancy in favor of $$$$ and promoting non-purebreds?

The judging information that follows is from other websites and no one does it better so we'll let the Westminster Kennel Club and the American Kennel Club (that seems to have "gone to the dogs" and the cats, and the All American Dogs) tell you all about the judges.

Mr. Thomas R. Bradley, III is the Westminster Best In Show judge. Mr. Bradley competed in his first dog show as a teenager in 1955, showing his German Shorthaired Pointer at the Adirondack Kennel Club show in Lake Placid, New York. He went on to become a breeder of German Shorthaired Pointers, Pointers, Labrador Retrievers, and English Cocker Spaniels under the Luftnase kennel name. Over the years he has also owned and shown Cairn Terriers, Whippets, and Cocker Spaniels, and more recently he has bred Border Terriers. He was co-breeder of the great Pointer Ch. Luftnase Albelarm Bee’s Knees, CD, JH, winner of more than 50 all-breed Bests in Show, three-time Best of Breed winner at the American Pointer Club national specialty (1989, 1991, 1992), and winner of the Sporting Group at Westminster in 1989.  Photo Courtesy: Westminster KC

Mr. Bradley was approved in 1965 to judge German Shorthaired Pointers, German Wirehaired Pointers, and Weimaraners, and he now judges all sporting breeds and Best in Show. In 1975 he joined the Westminster Kennel Club, and since then he has held many positions within the club, including communications director, but he is best known for his 15-year tenure as show chairman for the annual Westminster KC dog show in New York.

Mr. Bradley is also a founding member and executive director of Take The Lead, a charitable organization established in 1993 to support people in the dog sport with terminal or life-threatening illnesses.

Three new breeds will be eligible for Westminster for the first time in 2017: the American Hairless Terrier (Terrier Group), the Pumi (Herding Group), and the Sloughi (Hound Group). The addition of these breeds makes a total of 190 breeds and varieties in competition.

No matter your breed or your interest, if you love dogs, the Westminster Dog Show 2017 is one of the very best shows in the world.  Comparable to the Crufts Dog Show in the U.K. (about to become England again) the New York City event is glamour and glory for all.