1983 Only the third Hound to win Best In Show and through 2003 is still the last Hound to do so. BIS WINNER Ch Kabiks The Challenger, Afghan Hound Judge: Derek G Rayne

1989 The first female dog with an obedience title to capture Best In Show (and through 2004 remains as the only dog to do so).  BIS WINNER Ch Royal Tudor's Wild As The Wind, Doberman Pinscher Judge: Mrs Bernard Freeman

1992 Westminster becomes the first Champions Only dog show held under AKC rules. Awards of Merit are added to the awards, the exact number given to be a function of the number of entries in each breed or variety.  BIS WINNER Ch Registry's Lonesome Dove, Wire Fox Terrier Judge: Melbourne T L Downing

1993 After capturing Best In Show the previous year, Ch. Registry's Lonesome Dove, a Wire Fox Terrier, fails in an attempt to repeat the win when it is awarded third place in the Terrier Group. This is the last time that a BIS WINNER has tried to repeat.  BIS WINNER Ch Salilyn's Condor, English Springer Spaniel Judge: Mrs Barbara F Heller

1999 Spunky “Kirby” is the oldest dog ever to win Best In Show.  At eight years, one month and ten days, he becomes the first dog in the world to win both the World Dog Show (he won Best In Show at Helsinki over 17,000 plus dogs in 1998). Ch Loteki Supernatural Being, Papillon Judge: Mr Edd Embry Bivin

For the first time, Madison Square Garden is completely sold out for both days of the dog shows.

2006 Once again, the Garden is completely sold out for both days of the show, in spite of The Blizzard of 2006, which dropped a record-breaking 27 inches of snow on Manhattan on the Saturday and Sunday before the show.  BIS WINNER Ch Rocky Top's Sundance Kid, Colored Bull Terrier Judge: James G. Reynolds

Streaming video of the breed judging highlights increases threefold in its second year, producing a staggering 23.7 terabytes (a terabyte is 1,024 gigabytes). This total compares with 6.5 terabytes in 2005. Visitors logged 2.13 million visits (up 33% over the previous year).

The enthusiastic Garden crowd and national television audience join in saluting individuals and organizations in the dog world that joined with Westminster in being active in the rescue and recovery effort after the devastating Gulf Coast hurricanes of the previous Fall.

2007 Chet Collier, longtime member and past show chair and president, is the first recipient of the club's Sensation Award. Named for the club's symbolic Pointer, the award is given in recognition of a member's contribution to the club, to purebred dogs, and the sport of showing dogs. Collier died later that year.  BIS WINNER Ch Felicity's Diamond Jim, English Springer Spaniel Judge: Dr. Robert A. Indeglia

2008 The first Beagle ever and the first Hound in 25 years to win Best in Show at Westminster. His victory sets off a year long celebration dubbed "Beaglemania" by the media.  BIS WINNER Ch K Run's Park Me In First, Beagle (15 inch) Judge: Dr. J. Donald Jones 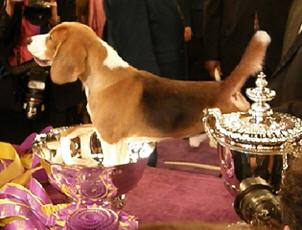 "Uno" becomes the first Westminster winner to be invited to the White House, visiting President and Mrs. Bush in May, and later visits Texas Gov. Rick Perry at the capital in Austin.

He rings the bell to open the NASDAQ market, throws out the first pitch at major league baseball games in Milwaukee and St. Louis, is a celebrity headliner at various events, and visits children, soldiers, and other patients in hospitals and health care facilities around the country. In November, he rides on the Peanuts/United Media float in the world famous Macy's Thanksgiving Day Parade.

2010 The 2010 Best In Show Trophy was awarded to "Ch Roundtown Mercedes Of Maryscot," a.k.a. "Sadie," a Scottish Terrier Judge: Mr. Elliott B. Weiss.  The New York Post calls her the "Hottie Scottie," and the Scottish Terrier named Sadie (Ch. Roundtown Maryscot of Mercedes) struts her stuff to Best In Show and a post-show media tour that includes a visit to the Empire State Building, a visit with Donald Trump, and a trip to the New York Stock Exchange to ring the bell to open the market. It is the eighth time that a Scottish Terrier has captured the top award at Westminster, a total second only to Wire Fox Terriers (13).

2011 What exciting happened this year?? For one, Paolo Dondina of Monterchi, Italy, became the first Italian ever and the first person from outside of North America since 1930 to judge Best In Show at the legendary Westminster Kennel Club's Annual All Breed Dog Show. This years BIS WINNER is GCH Foxcliffe Hickory Wind a Scottish Deerhound owned by Sally Sweatt & Cecilia L Dove & Dr R Scott Dove.

2012 Cindy Vogels was picked to assign Best in Show for 2012.  BIS WINNER was a Pekingese by the name of GCH Palacegarden Malachy owned by Iris Love & S Middlebrooks & D Fitzpatrick.

2013 The move to Piers 92/94 for the daytime breed judging on Monday and Tuesday is a huge success, with enthusiastic crowds packing the Piers for the club's largest entry (2,720) since 1998. Group and Best In Show competition at Madison Square Garden in the evenings is a big hit, as always, with the smallest finalist, an Affenpinscher GCH Banana Joe V Tani Kazari call name "Banana Joe", taking home the biggest prize, Best In Show awarded by Judge Michael J. Dougherty. In the post-show winner's media tour, Banana Joe visits all the usual media stops, rings the bell to open the New York Stock Exchange, and also performs the first-ever Broadway theatre walk-on for the Westminster winner in "The Mystery of Edwin Drood."

2014 The Masters Agility Championship, i.e. the ii Master Agility Champion Title inspires dog owners, and is added to Westminster Week at Pier 94. Agility brings back mixed breed dogs (All American dogs) to the club's activities for the first time since its earliest years. The event hits its 225 dog limit quickly (with 16 All Americans and entries in 63 breeds from 23 states). The public embraces Westminster's first Agility venture, filling Pier 94 on the Saturday night before the Dog Show and watching the live telecast on FOX Sports1 Network.

The 2,845 entries in the main event, the All Breed Dog Show, is the largest entry since 1990, making a total Westminster entry of over 3,000 dogs for the Week. The seven Group winners in the Best In Show ring bring more than 500 Bests In Show, perhaps the most powerful final lineup to date! GCH Afterall Painting the Sky, a Wire Fox Terrier, takes home the sport's ultimate award, BIS by Judge Ms. Betty Regina Leininger, and in his Media Tour afterwards, he has a walk-on role in the Broadway smash hit, "Kinky Boots."

The Seventh Annual Westminster Kennel Club Hunting Test expands to two days this year, once again reminding all that the club was originally about sporting dogs and beautiful scenic upland game bird fields. A two-day entry of 48 dogs representing many pointing breeds competed again at the Tamarack Preserve in Millbrook, NY. The Westminster Kennel Club was the first all breed kennel club to hold an AKC licensed hunting test for pointing breeds.

2015 Westminster Week, already featuring the exciting Masters Agility Championship, adds a new event and partner for this year -- the 6th Annual American Kennel Club's Meet the Breeds. With all events presented by Purina Pro Plan, thousands of spectators help the Westminster Kennel Club enhance and expand its annual New York City experience as the center of the canine world.  The 2015 Best In Show Judge was: The Hon. David Merriam and BIS Trophy was awarded to "Ch Tashtins Lookin For Trouble" a.k.a. "Miss P," a Beagle, 15 In.

2016 This inaugural year for the Masters Obedience Championship brings over 3000 dogs from all 50 states to compete in conformation, agility and obedience. Best in Show judge Dr. Richard Meen awarded a German Shorthaired Pointer named GCh. Garbonita’s VJK-Myst California Journey, the grandson of the 2005 Westminster winner Ch. Kan-Point’s VJK Autumn Roses. Both dogs are co-owned by Valerie Nunes-Atkinson who as a teenager won Best Junior Handler at Westminster (1981).

Monday, Feb 10th starting at 8:30 am to 4:30 pm at Pier 94, Judging the Terrier, Non-Sporting, and Toy Breeds and Prelims for Junior Showmanship.

Tuesday, Feb 11th starting at 8:30 am to 4:30 pm, final Preliminary Junior Showmanship and remaining two groups, Sporting and Working Breeds during the day at Pier 94.